The Irish Times view on organised crime: taking on the gangs 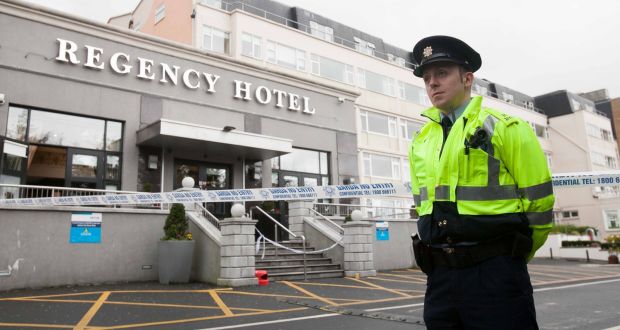 A garda at the scene of the fatal shooting of David Byrne (34) from Raleigh Square, Crumlin at the Regency Hotel in Dublin in 2016. Photograph: Gareth Chaney/ Collins

In the years since the Kinahan-Hutch feud gun attack at north Dublin’s Regency Hotel, the Garda pursuit of both criminal factions has been relentless. According to evidence aired in the Irish courts, Daniel Kinahan and his younger brother Christopher have long taken the reins of the international Kinahan cartel from their father, and cartel founder, Christy Kinahan Snr.

While Kinahan senior preferred to operate in the shadows, his son Daniel has been drawn to the bright lights of the boxing world, acting as a promoter and “adviser”. At the time of the Regency Hotel attack – five years ago this weekend – Daniel Kinahan was effectively going public with his involvement in boxing. He and some associates were at a weigh-in for a tournament he was organising when a group of gunmen from the Hutch faction burst in and opened fire. Kinahan fled on foot and escaped uninjured, though a number of his associates were shot, one of them fatally.

That attack was revenge for the murder in Spain in 2015 of Dubliner Gary Hutch, a one-time Kinahan cartel member who tried to shoot Daniel Kinahan but botched his effort and paid with his life. The Regency Hotel attack intensified the violent Kinahan-Hutch feud in the following years. It has now taken 18 lives, mostly in Dublin.

There are allegations Kinahan laundered drug money in the US, where the authorities would have power to bring down Kinahan if the Garda could convince them to prioritise him

Having been spectacularly caught off guard at the Regency Hotel, the Garda began an onslaught against the feuding criminals. Kinahan gunmen, money men, foot soldiers and even middle managers have been jailed for periods up to and including life. That action has been especially successful in degrading the power of the Kinahans’ Irish operation. All the while the Kinahan brothers, and their father, remain at large with their assets intact. A mark of Daniel Kinahan’s progress and prosperity is reflected in his rise through the ranks – unofficially of course – in the boxing world. The tournament he was launching in Dublin in 2016 was a modest promotion. Last June, however, Tyson Fury thanked Daniel Kinahan for putting in place his multi-fight deal with Anthony Joshua. It was later reported Fury had dropped Kinahan as an adviser. However, Fury will still fight Joshua this year in what has been dubbed the biggest fight in British boxing history

Kinahan was forced to move from Spain to Dubai some years ago when, among other factors, the cooperation between the Garda and Spanish police made his life intolerable there. The UAE authorities have, by all accounts, not proven as amenable to the Garda. However, there are now allegations Kinahan laundered drug money in the US, where the authorities would have the power and resources to bring down Kinahan if the Garda could convince them to prioritise him. The Garda Síochána deserves credit for the work done against the cartel over the past five years. But Daniel Kinahan’s downfall must remain a priority for as long as it takes.

DUBAI – how does it compare to being based in Ireland or Spain for that matter?

What do we really know about Dubai…medieval Sharia law but then what hypocrisy?

Recommend 60 minutes Australia. World Exclusive Dubai Royal Insider breaks silence on escaped princesses. The whistleblower is their cousin and he is talking from Inside the Royal household.

Criminal is a start; but acceptance of the breach of basic human rights at the very top of society is not acceptable to the people of Ireland, surely. Contrast is important; the Dubai Royal Family versus Cartels of Gangsters who have money, assets, cryptocurrency and gain access to set up base in Dubai.

If you want to learn more about the life in Dubai; this is an interesting video. You have to access link via Google.

On the subject of ‘missing Princess Latifa’ it is safe to assume that no nation state is going to ride to her rescue. Her father is the biggest landowner in the UK. He holds an Irish passport and as the Middle East’s moneybags this is one family dispute that even the Us won’t stick its meddline neck into… “

Martouk….an Irish passport…. it explains all. Just add to the melting pot the Kinahan Cartel.