Rangers fans have broken coronavirus lockdown rules in Scotland by gathering in numbers outside Ibrox Stadium and setting off flares.

Fans were seen crowding around a car entering the ground as police tried to hold them back.

Under coronavirus rules, public gatherings are banned and a maximum of two people from two households are allowed to meet outdoors.

Football games are continuing to take place behind closed doors with no fans permitted inside stadiums. 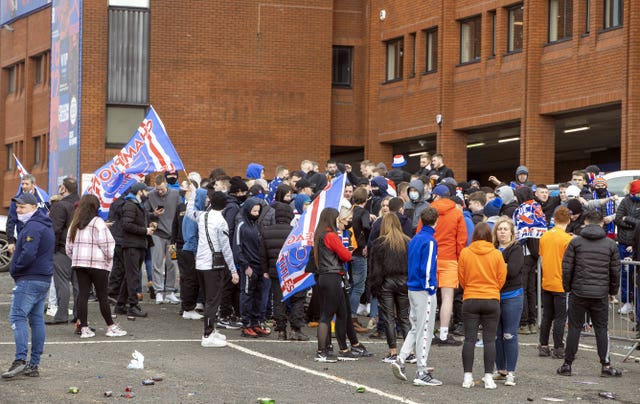 Rangers could win the league title this weekend if they beat St Mirren on Saturday and Celtic drop points against Dundee United on Sunday.

Police said no arrests have been made.

Chief Superintendent Mark Sutherland said: “About 10am today… a large number of supporters gathered outside Ibrox Stadium and a number of pyrotechnic devices were set off.

“I would remind supporters that in line with current Scottish Government coronavirus guidelines, all gatherings are currently prohibited and we would urge members of the public to comply with these restrictions.

“Our priority is public safety and an appropriate policing plan was in place and officers engaged with those present to explain and encourage compliance with restrictions.”

After Celtic fans took part in a protest outside the club’s stadium in November, she said: “We have advice against gatherings and every day I stand up here and say avoid crowded places.

“We have a limit on people coming together outside… so it stands to reason any group of people that are gathering together in a crowd are putting themselves and others at risk.

“Whether it’s football fans, rugby fans, any other kind of sport fans or just people in general, please don’t do it because right now, in the middle of this pandemic, it is a risky thing to do that puts you and other people at risk.” 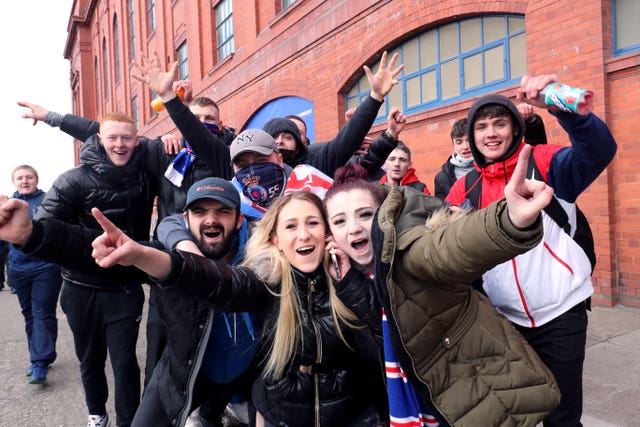 The Blues Brothers Rangers and Linfield FC fan group posted videos of the gathering on Twitter.

A member of the group told the PA news agency: “It’s scenes of joy. Ten years almost of pain and watching our rivals win the lot has been hard to take. It’s scenes of relief to stop the 10 in a row.

“We’d expect celebrations to be bigger when Rangers officially do win the title, whether that’s tomorrow or two weeks’ time against Celtic.”

Twitter user @rangersnt, from Glasgow, was also there and said: “Outstanding scenes, it’s been such a long time since we have won the league, we don’t want to miss out on one of the biggest moments in our history, to celebrate our teams achievements and (Rangers manager) Steven Gerrard getting us back to where we belong.”

Asked about the coronavirus restrictions, he said: “It’s up to everyone themselves and how they feel on the ongoing situation.”