Cahill organised and spoke at the event in Dublin’s Herbert Park. 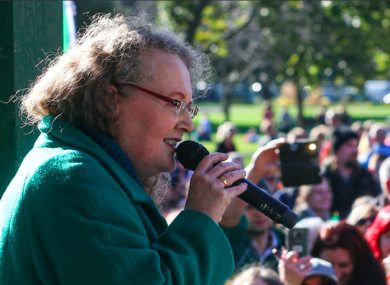 UNIVERSITY COLLEGE DUBLIN’S student union (UCDSU) has called on the college authorities to investigate Professor Dolores Cahill as to whether her activities amount to gross misconduct after an anti-lockdown protest in Dublin on St Patrick’s Day.

Professor Cahill, a faculty member at the UCD School of Medicine and chair of the Irish Freedom Party, organised and spoke at the event, which took place in Herbert Park, Dublin 4 on Wednesday.

UCDSU has now called on the college to investigate Cahill under the UCD Disciplinary Statute and Procedure.

In a statement, UCDSU President Conor Anderson said Cahill’s continued escalation of rhetoric had the potential to endanger public health.

“I have written to the head of the UCD School of Medicine and the head of UCD Human Resources to request that Prof Cahill be investigated under Statute 28 of the Universities Act 1997,” Anderson’s statement said.

“This statute defines gross misconduct, in part, as ‘deliberate disregard for health and safety precautions likely to endanger another person’.”

Billed as a ‘family and mental health day’, up to 500 anti-lockdown protestors attended the Herbert Park event and were addressed by Professor Cahill.

Professor Cahill told the crowd, “Our beautiful, treasured elderly in the care homes: they are not prisoners.”

She told attendees to “invite [elderly people] for Sunday dinner” and then write to the “minister for health and prime minister of Ireland and say, ‘I want my granny to join me next Sunday’”.

She accused gardaí of “criminal and unlawful behaviour” by enforcing Covid-19 restrictions and said that “if everybody just stopped wearing masks, this would be over”.

Professor Cahill also incorrectly claimed that “asymptomatic people do not exist” and said that if children are required to wear masks, they “will never reach their IQ potential, because their brains are starved of oxygen”.

Professor Cahill has established herself as a staunch opponent of Covid-related public health restrictions.

A number of her claims have been debunked by media outlets including The Journal and social media companies have taken down videos featuring her opinions on the pandemic.

In one video, which has since been removed from Facebook after being debunked by US science website Health Feedback, the UCD academic claimed that people will have “hardly any symptoms” if they get the virus once they have been eating healthily and taking vitamins C and D along with zinc. She also said that there is no need for a vaccine for Covid-19.

UCD students have, over the past year, voiced their discontent with Professor Cahill’s public activities.

On 16 June last year, UCD student newspaper The College Tribune reported that “a group of students collaboratively wrote a letter detailing Cahill’s claims and providing scientific evidence which contradicts them.

“This letter was signed by 133 students from the UCD School of Medicine.”

Contacted by The Journal this morning and asked for a response to the statement from the UCDSU calling for a college probe into her conduct, Professor Cahill said her response was “no comment”.