Pair travelled to UAE where they were due to, but ultimately did not, undergo cosmetic procedures, court hears

about 8 hours ago Updated: about 2 hours ago 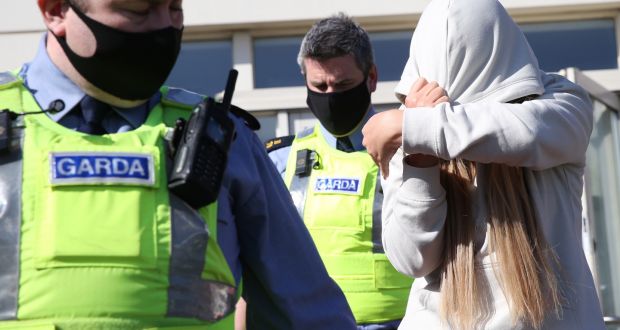 The High Court has made orders allowing two mothers who refused to enter mandatory hotel quarantine after arriving into Dublin Airport from Dubai to leave Mountjoy woman’s prison.

On Sunday Mr Justice Paul Burns amended bail conditions imposed on friends Niamh Mulreany and Kirstie McGrath, which will enable them leave prison and continue to quarantine at a designated hotel.

The judge also declined the women’s application to be allowed quarantine at their respective homes instead of the hotel so they could be re-united with their children.

The judge said that in light of the public health situation caused by the Covid-19 pandemic, and the measures put in place to reduce new variations of the virus, they must quarantine at the hotel.

Both women were arrested and charged with breaching section 38 of the Health (Amendment) Act 2021 by refusing to be detained in quarantine following their alleged refusal to go to the designated hotel last Friday.

They were granted bail by the District Court on Saturday, but were unable to satisfy the financial conditions imposed on them. This resulted in their incarceration at Mountjoy women’s prison.

Following an application by their lawyers on Sunday morning the judge directed an inquiry, under Article 40.4.2 of the constitution, into the legality of their detention at Mountjoy woman’s prison.

However following discussions between lawyers for the parties that action has now been converted into a constitutional challenge against laws requiring persons to enter mandatory quarantine on their arrival into Ireland from certain countries.

Lawyers for the DPP and the prison’s governor opposed the application and had argued that their detention was valid.

They also argued that while they were not unsympathetic to the situation the two women found themselves in the mandatory quarantine was introduced in the interest of the greater public good to help counter Covid-19.

The mandatory quarantine had been introduced by the state following advice from experts, the court heard,

The two women attended the hearing via video link from the prison. The court heard they had travelled to the UAE where they were due to, but ultimately did not, undergo cosmetic procedures.

The court also heard that the trips and procedures were birthday presents funded by the women’s respective families and friends.

The pair were granted bail by the District Court on Saturday, on terms including that they remain in the quarantine hotel, and provide their own bond of €800, of which €500 had to be lodged.

They also had to provide an independent surety of €2,000, of which €1,800 had to be lodged and surrender their passports and not leave the jurisdiction.

However, the High Court heard neither woman was able to take up bail resulting in their detention at the prison.

Following talks between the sides, the State parties, represented by Kate Egan and John Gallagher, agreed that the financial conditions of their bail could be relaxed.

All that was at issue was if the two could quarantine at their homes or at the designated hotel.

In his decision the judge agreed with the State that the two must quarantine at the hotel, given the requirements currently enjoy the presumption of constitutionality.

He granted the two bail on condition that they be of good behaviour and that there be a cash bond of €100, with no lodgement required.

He added that the two may not have to spent the 14 days at the hotel, given there was an appeal mechanism included as part of the 2021 Act which they can avail of.

The judge also noted that there was also a waiver scheme in the Act for persons who cannot afford to pay the costs of quarantining in the hotel. He warned them that any breach of the quarantine could see them back in the same position that they had found themselves in.

John Fitzgerald SC, for the two women, claimed their detention was not lawful.

Counsel said the bail conditions imposed by the district court, given the circumstances were “draconian and disproportionate”.

The women have no previous convictions, and had tested negative for Covid-19 following three recent tests, he added.

Their mandatory quarantine, which his clients were not aware of before they left for Dubai, amounted to a form of preventative detention for which there is no lawful basis, it was argued.

Counsel said Ms McGrath of St Anthony’s Road, Rialto, Dublin 8 is the mother of children aged 10 and 8 years, and is the recipient of lone parents’ allowance.

Her trip to Dubai was a 30th birthday present funded by family and friends.

She was due to undergo a cosmetic medical procedure, which she believed would assist her in addressing some personal matters.

Counsel said that Ms McGrath’s mother, who has taken leave from her job, has been looking after her two children. However, her mother must return to work in the coming days.

Mother-of-one Niamh Mulreany, who also celebrated her 25th birthday in March, also had her trip funded by a family member as a gift. Ms Mulreany of Scarlett Row, Essex Street West, Dublin 2, who previously had breast enhancement surgery, had travelled with the intention of undergoing a corrective procedure in Dubai.

She too did not go ahead with the procedure. She is also in receipt of the lone-parent allowance.

When they attempted to return to Ireland from Dubai on March 31st, they were informed they had to pay €1,850 in order to quarantine at a hotel upon arrival in Dublin.

They were not able to pay that sum, and were told in Dubai if they did not pre-book the hotel and pay, they would be denied passage to Dublin.

They were not allowed board flights to Dublin for two days. Following representations from a public representative and the Irish consulate in the UAE they agreed to make deferred payments for the hotel.

Arising out of that they allegedly refused to go to the designated hotel because they could not afford the fee, and over concerns for their children.

In reply Mr Gallagher, for the prison governor, said information about mandatory quarantine was put in the public domain the day before the women travelled to Dubai on March 24th.

In all the circumstances counsel said both women were validly detained.

The matter will return before the court later this month.