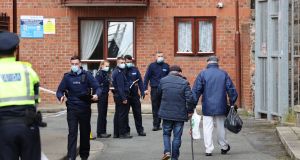 Gardaí at the scene of this week’s murder at Robinson’s Court as local residents pass by. Photograph: Nick Bradshaw

Almost inevitably, any report from the scene of a murder in Ireland will include a neighbour saying that “nothing like this ever happens around here”.

Unfortunately, it is a cliche which does not apply to Robinson’s Court, a small rectangle of flats located just of Cork Street in Dublin’s south inner city.

“There was a murder there in ’16,” says a man called Nicolas, pointing to one of the flats in the two-storey complex. “And one around the corner in ’06.”

Nicolas was visiting his friend in the complex on Friday as its residents dealt with yet another violent killing.

Sometime on Wednesday or in the early hours of Thursday, Kwok Ping Cheng, known locally as “China George” was murdered in his flat at the front of the complex.

A postmortem conducted on Friday by pathologist Dr Heidi Okkers was expected to confirm what seemed obvious to the gardaí at the scene, that the victim was murdered with an axe-like weapon which was found nearby.

Described locally as a frail, quiet man who walked with the aid of a trolley and drank in the Pimlico Tavern, Mr Cheng was well liked by his neighbours but kept to himself.

Residents who spoke on Friday were unsure where he even came from. As his nickname suggests, some said he was from China. Others thought he originally came from Vietnam.

Believed to be in his early 70s, he had been living in Ireland for many years, and living in Robinson’s Court on his own for at least five years.

As of Friday evening gardaí were still trying to track down his family members and, as a result, have yet to officially release his full name. The motive for his murder remains a mystery.

There was no obvious signs of a break-in and nothing to connect it with the two previous killings. The victim’s body was discovered on Thursday morning by a home care worker who regularly visited Mr Cheng

The fact that three killings have taken place in 15 years in Robinson’s Court is all the more shocking given the nature of the residential complex. Almost all of the 20 or 30 residents of the block, which is run by Dublin City Council, are elderly and many are frail or have some difficultly in moving around.

For some of the residents, the murder has compounded what has already been a traumatic month. In recent weeks, some residents were called to give evidence at the trial of a man accused of murdering 61-year-old Anthony Rogers in the complex in 2016.

Neighbours found Mr Rogers, who was a wheelchair-user, with fatal stab wounds to his head and neck after hearing him shout: “Help me, I’m dying here.”

“It was an awful experience for me,” one of the neighbours told the trial, which ended when the prosecution dropped the murder charge against the accused and a “nolle prosequi” was entered.

Ten years previously, in 2006, Vincent Plunkett (80) was found by home-help services with his throat slit in his flat in Robinson’s Court. Gardaí believed Mr Plunkett, who was a gay man, may have brought his killer back to his flat. Gerard Brady (22) was later charged with his murder but died in custody before he could stand trial.

Cllr Devine said residents are living under a cloud of fear and many are eager to move to another area.

“They’re ringing, saying ‘Get me out, get me out. I can’t stay here any more.’ But where do they go?” she said.

One elderly resident who preferred not to give her name said: “I don’t feel great about it. I’d prefer to live with my niece but she’s worried about Covid and she has the kids.”

Even aside from the murders, it has been an extremely difficult year for the residents of Robinson’s Court and other elderly people in the south inner city due to Covid-19.

Over the last two days, the council has been sending officials to check on residents. But some are too afraid to answer the door and many do not have mobile phones, meaning visitors have to shout in the letter box.

Cllr Devine, who works in psychiatry, said some elderly people have stopped communicating due to isolation and loneliness in the last year.

“It sounds really weird. They stop talking because there’s no visitors, no one to speak to. They’ve just lost the skill of communication,” she said.

“The only stimulation they’ve had is this awful stimulation of what happened on Thursday.”