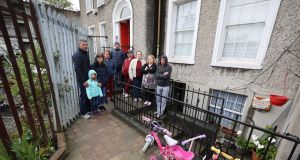 An asset management company is seeking the imprisonment of 19 adults because they will not leave their rented homes in north Dublin.

In a case due before the High Court on Tuesday, Pepper Finance will say the 12 households have no legal right to remain in the houses at 31 Richmond Avenue, Fairview, and 21 Little Mary Street, Dublin 7. They will say the tenants are in contempt of a previous court order to vacate the properties.

Pepper Finance, the fourth mortgagee of the properties since 2008, is “seeking orders for attachment and committal” of the tenants described in its legal submissions as “persons unknown”.

The low-income households, who have lived in their homes for up 16 years, say they were not aware of the proceedings until late last year and have nowhere else to go. Many are from Romania and have limited English.

They say they continued paying rent to their original landlord, businessman Jerry Beades, and were unaware of convoluted legal proceedings centred on the properties for more than a decade.

Mr Beades, who remains the mortgage holder, maintains as owner he is legally entitled to collect rent. He says he was not asked to provide details of the tenants in either property by any of the mortgagees since 2008.

“I don’t believe they have any interest in looking after tenants,” he said. “They just want them out.”

Vasile Circu, who lives in a three-bedroom flat at Richmond Avenue with his partner and two daughters, says they are in “a very bad situation”. They occupy one of seven flats in the large, run-down house.

“The problems started this year on January 14th. About six people arrived and they said we had to leave the house. They just said we have to leave the house. I call the Garda because they wouldn’t tell us who they were. The Garda came and then they just leave. In February . . . the same thing happening again.”Learn more
volume is 80%volume is gedempt

Mr Beades, who secured a mortgage for the properties in 2003, was ordered to surrender possession in June 2008 to Irish Intercontinental Bank.

Following lengthy, largely unsuccessful appeals by Mr Beades possession was granted to KBC in July 2018 and subsequently to Beltany Properties in October 2019 and then to Pepper last July.

Mr Circu, who works in construction, shows a notice addressed to “the occupants” of the house, without a name or flat number, dated December 7th, from the Maples Group law firm, which is acting for Pepper.

Referring to the case, “Pepper Finance Corporation DAC v persons unknown in occupation of the property known as 31 Richmond Avenue”, it says: “We refer to . . . our client’s application for injunctive relief and possession of the property which came before the court on 25th November 2020. We note that you were not in attendance and did not enter an appearance.”

Mr Circu says he did not know about the case then, or in October when the case was also before the courts.

Following the incident at the house in January, he and neighbours attended court on February 19th with a legal team acting pro bono. Pepper’s application for their committal was adjourned to allow the tenants’ solicitor, Eoghan O’Reilly, gather affidavits.

He argues that the tenants were incorrectly served orders as they were not addressed to them and that their tenancies are valid. “It may be necessary that the children are provided with independent legal advice in relation to their rights.”

Mr Circu said he had tried to look for somewhere else to live but it was difficult because of the pandemic.

“There is no work so there is no money to get the other rent. The rents are crazy,” he said.

Asked what solution he and his neighbours would like, he says they would like to stay and pay rent to Pepper or another owner.

He says he is “very confused and very worried” and that “it is very bad situation with the kids”.

Pepper and the Maples Group declined to provide a comment as the matter is before the courts.