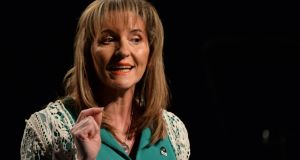 Veteran Sinn Féin figure Martina Anderson was stood down after an “unprecedented” inquiry across the republican movement which investigated claims of “hatred” for the party in Derry and “jobs for the boys”, according to a party source .

Both Anderson and Karen Mullan, Sinn Féin’s two MLAs in the five-seater Foyle constituency, announced on Tuesday they would not be running again for the Stormont Assembly.

The party has said they were asked to consider their positions following a review into poor electoral results in the city over recent years. It is understood Sinn Féin feared losing one of its Foyle seats, where the SDLP has been bolstering its voter base, in next year’s poll.

A well-placed Sinn Féin source describes the review as “a widespread, unprecedented and intense consultation” not just with party members, but also with “the wider republican family including families of [IRA] volunteers who had died”.

Respondents were “guaranteed confidentiality” by a review panel of “senior republicans” including elected and unelected officials from across Ireland.

“There was a sense that people have really fallen out with us in Derry,” the source says, noting some replies suggest “we’re hated by the community we would seek to lead”.

There was no suggestion of corruption. “But I am aware of the sense that people were getting jobs in the community sector… people were boxing-off jobs in peace funding and community development funding.

Inside Business with Ciaran Hancock · What is the potential economic cost of a united Ireland?

“There was a sense in Derry that there was a cohort of people who were seen to be arrogant and dismissive and looking after themselves.”

Furthermore, there was a “sense that a core group of people had run the party into disrepute”, the source says.

A number of Sinn Féin figures in the city did not immediately respond to requests for comment.

Denis Bradley, former vice-chairman of the North’s Policing Board and a political observer, said there had been “rumblings for a couple of years at least” about unease with how Sinn Féin was operating in Derry.

“You don’t get away with that in Derry. Eventually, people say what the hell is going on there; it’s a small town, it’s not like Belfast or Dublin. I think all of those things came together.”

“They said they were bringing all sorts of things to Derry,” he says. “But Derry is top of the pile when it comes to every bloody bad indices you can think of – health, employment, all the important day-to-day stuff. Derry is not in a good place, and it’s probably going to get worse.”

Derry-based journalist Eamonn MacDermott says the “root and branch clear out” of Sinn Féin’s leadership in the city involved “everyone who was prominent in the party, as far as I can see”.

He says it is “a very risky game Sinn Féin are playing”, adding that there are no obvious candidates to take over, a view shared by many party insiders.

Parachuting someone in would be “extremely dangerous ”, says MacDermott, because people in the city “don’t like being told what to do” by outsiders.

“It only takes 30 years to be accepted here.”