Gardai have appealed for witnesses as they investigate two suspected arson attacks that destroyed cars as well as a family-run auto repair business that has traded on the northside of Limerick city for at least half a century.

Slater’s Crash Repairs, situated at Old Thomondgate, was completely destroyed by one of the suspected arson attacks this morning.

It is believed up to eight cars inside the premises were also destroyed in the blaze.

Gardaí sealed off the premises and surrounding area and a spokesman said their investigation would be led by the results of a forensic examination.

Appealing for witnesses, a Garda spokesman said: “At around 1.30am, Gardaí received a report of a car on fire at Browns Quay. At around 5.30am Gardaí then received a report of a fire at a business close by. A significant amount of damage was caused to the building as a result of the fire. Gardaí and fire services attended both scenes and a technical examination has since been completed. No arrests have been made and the investigation is ongoing.”

“Gardaí are appealing for anyone who was in the Browns Quay area between 1am and 6am, particularly drivers with dashcam footage, to contact Mayorstone Park Garda Station on 061-456980, the Garda Confidential Line on 1800-666-111 or any Garda Station.”

Fire control said Limerick City firefighters returned to the scene again after receiving a further alert of a fire at the garage shortly after 9am. 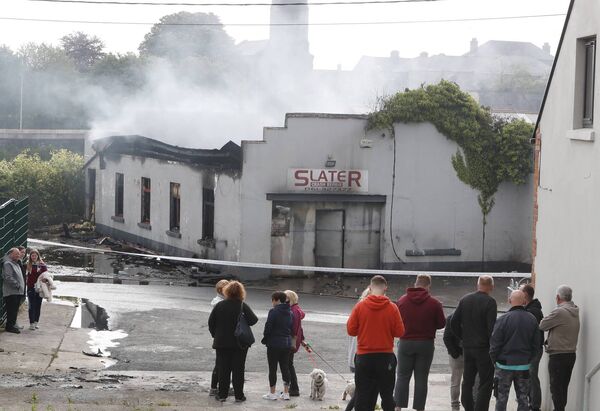 Onlookers at the scene of the fire that destroyed the building. Picture: Liam Burke/Press 22

At the scene on Friday morning, owner, James Slater, could only watch as smoke billowed out of the burnt shell that was his business.

“I got a call about 5.30am, and they said the place was [on fire]. We are here 50 years easily, my dad Jimmy Slater ran it before me, now it’s just myself and my brother and we have two or three lads here.”

“I feel for James, he’s the most obliging man. He works so hard and his family are so well-liked here.”

“His workmanship is first class, the whole of Limerick know James. It’s a really sad time for James, but being the man he is, he will bounce back again.”

“Thankfully no one was hurt, and I know the gardaí will carry out a full investigation into why this happened.”

Independent councillor Frankie Daly said the incident was “absolutely one of the saddest days for the community in Thomondgate, where James is a very loved and respected businessman”.