‘People in hospital and in graveyards’ because of Clare drug dealer, judge says 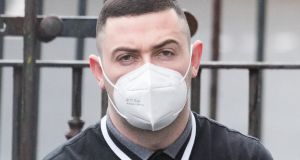 Shortly before midnight last September in a garage attached to a rented house at Spancilhill outside Ennis, Tony McInerney’s involvement in the drugs trade was halted.

The 25-year-old father-of-two had been putting a delivery of cocaine together with a mixing agent, benzocaine, in a blender when armed gardaí burst into his makeshift “factory”.

Wearing orange latex gloves and with a bag of cocaine in one hand, McInerney stood up and threw the bag into a bucket of water. Discarding it, however, was a futile exercise.

The Garda’s Clare Divisional Drugs Squad, supported by the Garda’s Armed Support Unit, seized nearly €50,000 worth of cocaine, and a press and scales. McInerney’s iPhone yielded a “tick list” of drug deals, while €2,500 – the rent for the garage due on the night – was found on a table.

This week, he appeared before Circuit Court Judge Brian O’Callaghan, who took up his position in Clare last year and has since adopted a tough policy for drug dealers.

His sentence of 12 years for McInerney – the longest given by Ennis Circuit Court this century – stunned observers, though the convicted drugs dealer betrayed no emotion.

Backing up his tough sentence, Judge O’Callaghan told the court the pandemic of illicit drugs “in this country long predated Covid-19”.

“Please God, this society will treat this pandemic, once Covid-19 has gone, with the same vigour it has approached Covid-19 in the past 12 months,” he declared.

Before his arrest at Spancilhill on September 23rd last, McInerney, Glenina, Gort Road, Ennis, had never spent any time in jail.

Describing him as “a major player” in the “dirty drugs business in Clare”, Judge O’Callaghan said there were “people in hospital and in the graveyards of this country because of his actions”

Though he had never worked or claimed social welfare, McInerney had indulged in “obvious displays of wealth” – driving around in high-powered Mercedes and Audis.

The McInerney conviction was “very significant”, said Det Insp Padraig Frawley, who is in charge of serious crime investigations in the district.

“It does send out a message to those involved in drug trafficking in Clare that the sentences that they will get will be significant.

“Generally, when one person is removed from the supply chain, others step in and we have to be aware of that and try to interrupt that as early as we possibly can,” he said.

Ennis solicitor Daragh Hassett recently told Ennis District Court “the county is awash with drugs and this is not unique to Clare. It seems drugs are readily available in every rural village and there is no longer a need to travel to the urban centres to get access.”

McInerney’s solicitor, John Casey, said on Friday that he had received instructions from his client to appeal the length of the prison term to the Court of Appeal.

A native of Dublin, McInerney moved to Clare in 2006. Three years later his then 23-year-old brother, Kevin, died in a drowning accident in Spain.

Not long after that, McInerney started using drugs, dropping out of school at 15. Two years later in 2015, he was convicted after being found with €1,700 worth of cannabis, receiving a four-year suspended jail term.

That conviction, McInerney told the court this week, “ruined my life when it comes to work and the fact that I didn’t have a proper education makes it even worse”.

“I need you to know I am not a bad person but I have made some bad decisions in my life,” McInerney told Judge O’Callaghan.

In his letter to Judge O’Callaghan, McInerney spoke about his parents, his partner and their two young children when he stated: “There are so many people who care about me and I care about them also. I need to get home and make things right.

“Please let me home to my family as soon as possible. I know I have to suffer the consequences of my actions. I take full responsibility. I am sorry for everything I have done,” he wrote.

He said the court wanted the people of Clare to know it would issue penalties “with the obvious purpose of serious deterrence when it comes to dealing with people such as Mr McInerney”.

Throughout the State, the value of drugs seized so far this year has increased fourfold and cash confiscated from gangs has doubled as the narcotics trade boomed during the coronavirus pandemic, especially in rural Ireland.

On Thursday, the acting Minister for Justice Heather Humphreys said the Garda National Drugs and Organised Crime Bureau had seized €28 million worth of narcotics since January, up from €5.7 million compared with the same period last year.

Highlighting the growing crisis in rural areas, Garda statistics show that offences increased in Roscommon-Longford by 96 per cent in 2018-2020; Donegal was up 91 per cent; while in Cavan the number was up by 84 per cent.

In Louth, the number of offences prosecuted by the gardaí were up by 86 per cent; Cork city up 62 per cent; Limerick up 40 per cent; Clare up 38 per cent; Mayo up 37 per cent; and in Waterford the number was up 35 per cent.