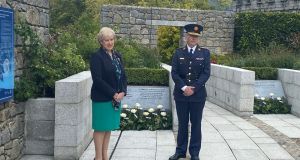 The 89 members of An Garda Síochána who have died in the course of their duties , were remembered in moving ceremony, at the Garda Memorial Garden in Dublin Castle, on Saturday.

At exactly 12 noon as the bells of the Chapel Royal rang out, Minister for Justice Heather Humphreys joined Garda Commissioner Drew Harris as they took their seats as the Garda Band played the Ministerial Salute.

In his address Mr Harris said the annual day to remember the colleagues who lost their lives was “our organisation’s most important day”. He said “each one of our fallen colleagues dedicated their lives to serving and protecting our nation”.

He especially remembered Detective Garda Colm Horkan who lost his life in the last year, during service in Castlerea Co Roscommon on June 17th 2020. He paid tribute to Det Garda Horkan saying he had gone to work on the night he died, performing his duties as impeccably as he had done for the past 24 years.

He said it was “the mission of An Garda Siochana to keep the people of Ireland safe.

“Effective policing requires the trust and confidence of the communities we serve. So often the practice of community policing depends on the trust placed in an individual member of An Garda Síochána”.

He said each of those who died epitomised the values of “An Garda Síochána’s distinct values: fairness, integrity, empathy and professionalism”.

Mr Harris said while the families and friends of those whose lives were lost could not be with them due to social distancing “ your loss remains at the forefront of our minds”.

Being part of the Garda was a “challenging and sometimes dangerous career” she said “and it is important that we recognise both the physical and metal challenges which this brings. She welcomed the publication of the new Garda Health and Wellbeing Strategy.

“As we approach 2022, the centenary of the formation of An Garda Síochána, the dedication that gardaí have shown in preserving law and order and the security of our country since the foundation of the State, can not be over stated”, she said.

The names of each of the 89 garda who died in the line of duty were read out at the ceremony and a wreath-laying ceremony was followed by a minute’s silence, reveille, the sounding of the Last Post and the national anthem.