Britain passes 4,000 daily Covid cases for first time since start of April as positive tests rise by almost 50% in a week but deaths stay flat with 10 victims – as growing number of experts call for ‘Freedom Day’ to be delayed over Indian variant. We must never forget the British Empire and the fact of our occupation for 700 years and Dublin being the second City of the British Empire. There are no borders for this COVID-19; it is a global and must be conquered. R rate moving towards 1 in UK and possibly rising further. What is R rate in Ireland?

Britain today recorded more than 4,000 daily Covid cases for the first time since the start of April, amid mounting fears the rapid spread of the Indian variant will scupper ‘Freedom Day’ next month.

Department of Health bosses posted another 4,182 positive tests, up by almost half on last Friday’s count. It is the most reported in a single day for nearly eight weeks, since the 4,479 on April 1. Almost 75 per cent of all new cases are now the Indian variant.

Ministers always expected cases to increase when restrictions were eased, and they believe vaccines will stop the NHS from being overwhelmed once again.

But No10 has refused to rule out delaying plans to relax lockdown on June 21 and will have to hit the panic button if hospitals start to suffer spiralling admissions, or the mutant strain is found to be much more infectious than the Kent variant, which triggered the devastating second wave.

Cautious scientists have called for No10 to delay the final step on the roadmap back to normality for at least two months, giving the NHS more time to fully vaccinate millions more adults. Analysis suggests a single dose of the jab is only around 33 per cent effective at blocking symptoms of Covid in patients infected with the Indian variant, compared to about 50 per cent for the once-dominant Kent strain.

Professor Andrew Hayward, a member of the New and Emerging Respiratory Virus Threats Advisory Group (Nervtag), said there was ‘a good argument for caution until such time as we’ve got a much higher proportion of the population double-vaccinated’.

Admissions have started to creep up across Britain, rising by 30 per cent in a week to 134. Figures will get even higher over the next few weeks because of the lag between getting infected and becoming severely ill.

But hospital bosses in the worst-hit towns insist jabs have changed the game, with barely any infected patients who need medical care having been fully vaccinated.

Deaths have stayed flat, however. Just 10 victims were recorded today, up from nine last Friday. It can take several weeks before any spike in admissions leads to an uptick in fatalities but scientists are also confident that the UK’s vaccination roll-out will stop thousands from dying in an inevitable third surge.

It comes as scientists today predicted Greater Manchester and Bedfordshire are likely to become Covid hotspots in the coming weeks, as cases continue to surge in areas where the Indian variant is rife.

A map by Imperial College London Covid experts suggests more boroughs of Greater Manchester – including the city itself, Bury and Burnley – will see infections spike in the first weeks of June. Blackburn, Bolton and Rossendale are already hotspots in the North West, which has the highest rates in the country, it shows.

Nationally, however, a major swab-testing survey found there were fewer than 50,000 people infected with Covid on any given day in England last week with just one in 1,120 testing positive. Despite being similar to the previous estimate, the weekly Office for National Statistics report said: ‘There are potential signs of an increase in the two weeks ending 22 May.’

Meanwhile, No10’s top advisers said today the R rate of the virus is at least 1.0 in England, meaning the outbreak is growing again. It is the first time since January the figure has been higher than one.

Nudging up to a possible high of 1.1, the average number of people getting infected was expected to spike again with the easing of lockdown restrictions.

Signals of how Britain’s outbreak is changing have become more confused over the past week, with official case counts increasing but health chiefs suggesting this could be a result of surge testing in areas where the disease is most prevalent, such as Bolton. Although experts fear the Indian variant will cause a third wave, cases are already dropping in some hotspots. 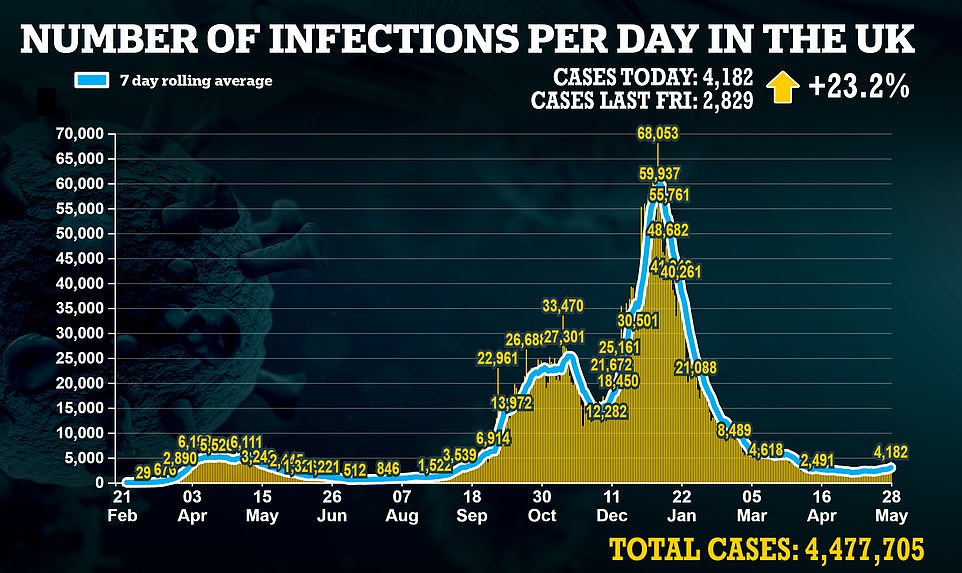 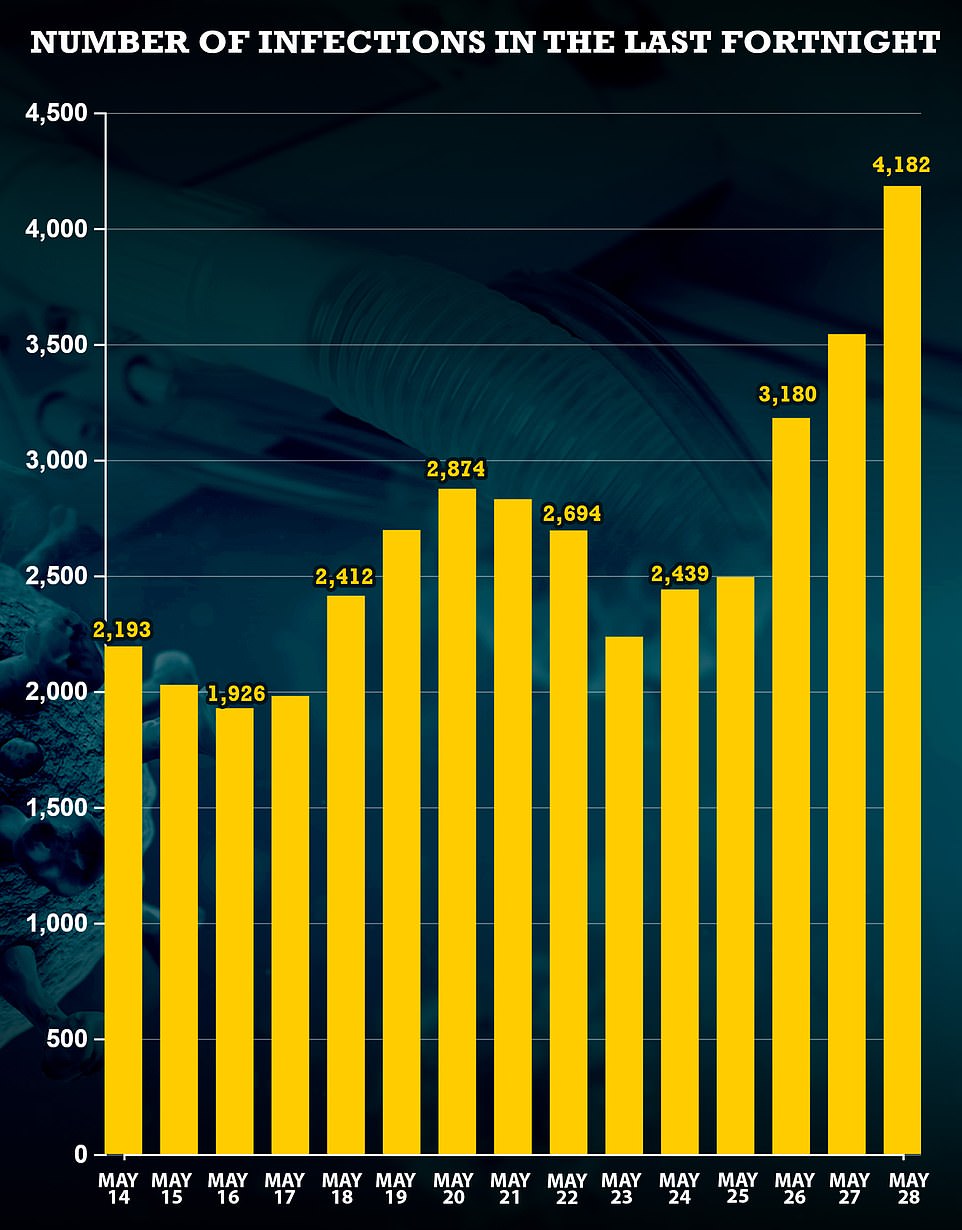 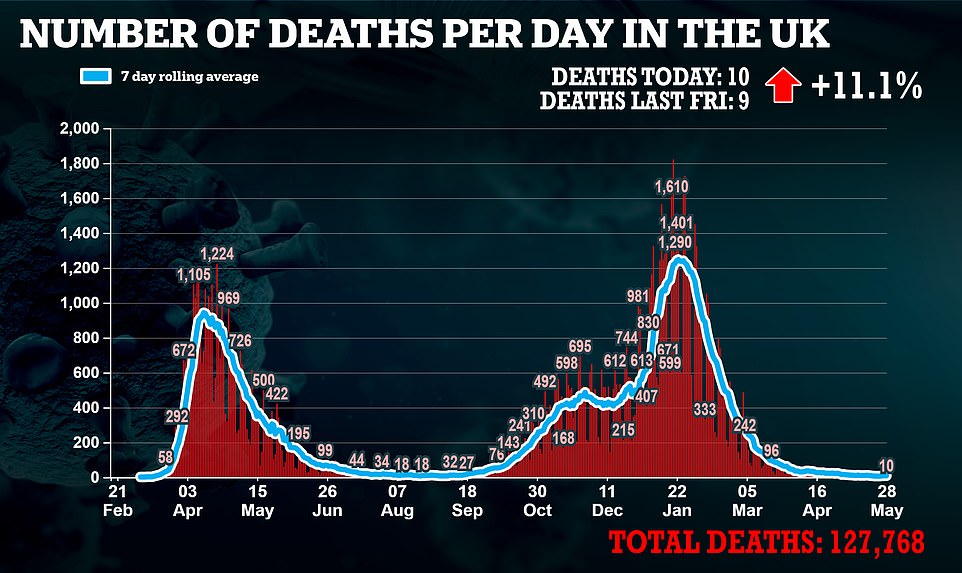 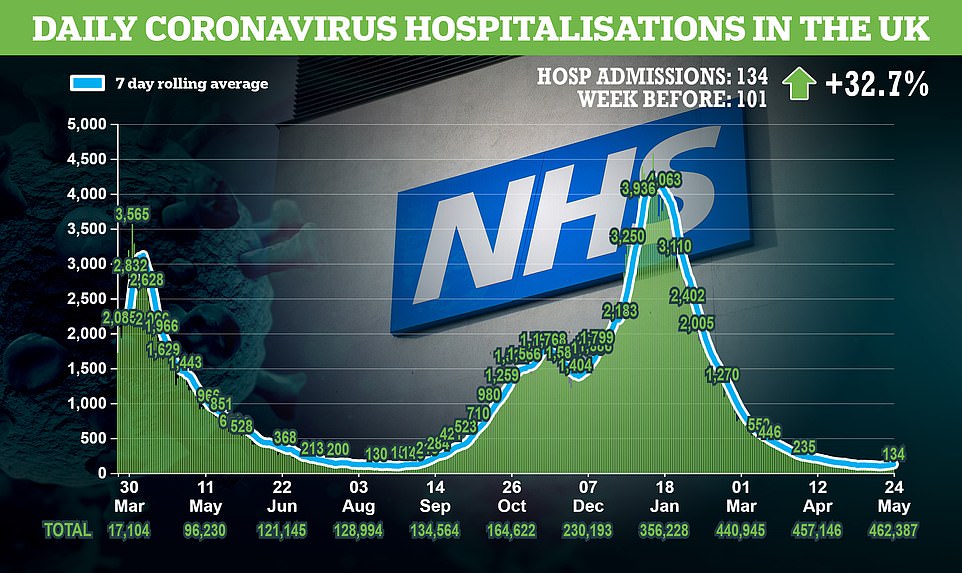 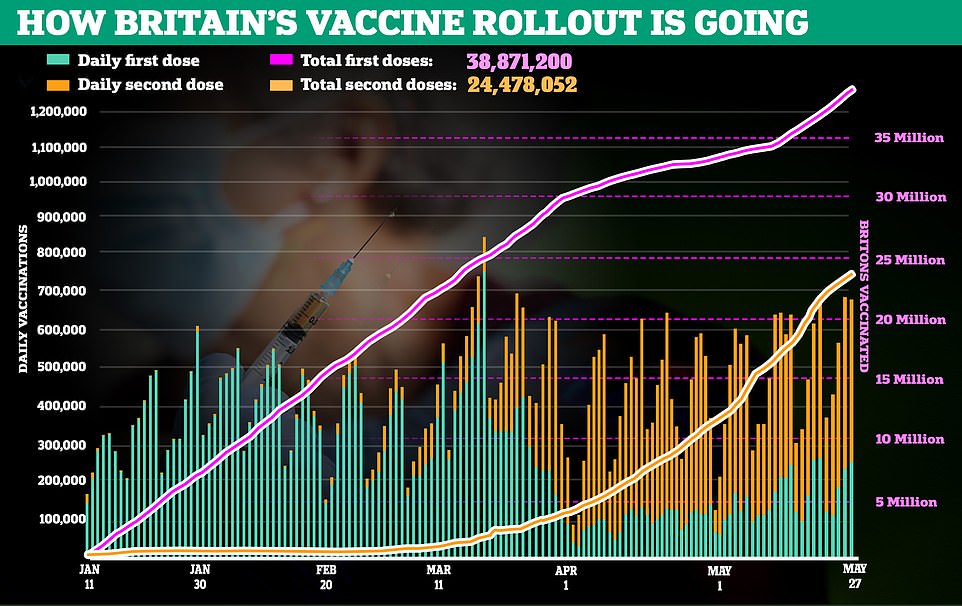