The long-serving Limerick Fianna Fáil TD says he will also sell his shares in Formation Group, following revelation of its links to bulk-buying of houses

Willie O’Dea, the Fianna Fáil TD, said he was stepping down ’because of all the hassle that went on.’ Picture: Leah Farrell/RollingNews.ie

Willie O’Dea, the Limerick TD and former minister for defence, has resigned as chairman of the Formation Group after reports that the property company was connected to the bulk sale of houses in Limerick city.

O’Dea told the Business Post that he was stepping down to avoid the appearance of any conflict of interest, and that he would also be selling his shares in the company.

Willie O’Dea and former minister leave board of property developer 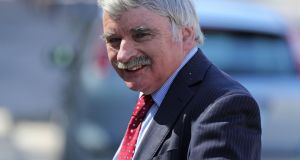 Willie O’Dea had a 0.91 per cent stake in the business, according to its website. Photograph: Nick Bradshaw

Fianna Fáil TD Willie O’Dea and former minister Batt O’Keeffe have left the board of a UK property developer linked to the bulk sale of social housing in Limerick to approved housing bodies that qualify for State funding.

Filings to the UK companies registry show that Mr O’Dea, a former defence minister, and Mr O’Keeffe resigned last Monday from Formation Group, a London-based developer whose main shareholder is in Jersey.

Mr O’Dea had a 0.91 per cent stake in the business, according to its website. He did not return calls on Sunday.

Reports that almost 250 social homes Formation Group was building in Limerick were to be sold to approved housing bodies followed a political furore over the sale of a Co Kildare housing estate to an corporate investor.

Mr O’Dea had been non-executive chairman of Formation Group since mid-2014 and Mr O’Keeffe, who was a Fianna Fáil TD and Senator for 19 years, was a non-executive director.

The business withdrew late last year from the Acquis stock exchange in London.

The company is also involved in two other housing developments in the city, although only some units in these schemes are reserved for housing bodies.

Leo Varadkar, the tanaiste, told the Fine Gael parliamentary party last week that the government needed to re-examine the role of “approved housing bodies” in bulk-buying developments. His comments were made after Darragh O’Brien, the housing minister, moved to impose 10 per cent stamp duty on vulture fund acquisitions of housing projects.

O’Dea, a former minister for defence, is the non-executive chairman of the Formation Group, a London.

The legislation introducing this tax efficient vehicle came into effect in 2011.