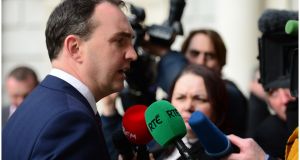 Fianna Fáil TD Marc MacSharry: ‘Where I live in Strandhill, there’s so many bollards on the seafront, I’d say had the Nazis done it in France on D-Day, God knows what the outcome of the war would have been.’ File photograph: Bryan O’Brien

Fianna Fáil TD Marc MacSharry has said local authorities across the country are blocking the public while at the same time officially encouraging an outdoors summer.

But they “can’t have it both ways”, the Sligo TD insisted as he called for policy alignment on the reopening of the economy and society.

“There’s no evidence to suggest the congregations of recent weeks, not just last weekend, has led to a spike in numbers,” he said.

“Let’s get give people the summer that they deserve. And then we might have the beginning of a recovery.”

Speaking during a debate on the National Economic and Resilience Plan Mr MacSharry welcomed the €913 million recovery funding from the EU but said “we’re talking as if the recovery has begun, and that society is open. Society is most certainly not open.”

“Where I live in Strandhill, there’s so many bollards on the seafront, I’d say had the Nazis done it in France on D-Day, God knows what the outcome of the war would have been.”

“We have a level of paranoia and scaremongering that is not consistent with either the numbers in hospital or the daily case numbers.”

The Sligo-Leitrim TD criticised chief medical officer Dr Tony Holohan who was “tweeting over the course of the weekend his outrage over seeing people out doing what we told them to do”.

“You can have a takeaway a pint, or a Coca Cola, but don’t congregate on the canal, because the gardaí are going to come along” and make people leave.

“Where do we expect people to go? As we speak, over in Stephen’s Green we are fencing off the bandstand because the last thing we want is for people to congregate there.

“So you can’t have it both ways. And this is replicated all over the country, in Spanish Arch or where I live