Lawlor was the chief suspect in the murder and mutilation of 17-year-old Keane Mulready-Woods. 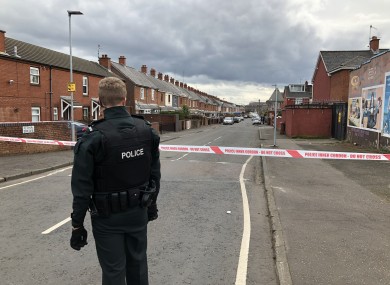 SUSPECTED GANGLAND KILLER Robbie Lawlor was shot dead just one week ago but gardaí now fear an island-wide gang war is on the verge of breaking out.

Lawlor was killed last Saturday as he went to collect a drug debt in the Ardoyne area of north Belfast, becoming what gardaí believe is the latest victim of the Drogheda feud, which now involves at least five criminal enterprises on both sides of the border.

His murder sparked scenes of celebration across parts of Dublin, Belfast and Louth as his enemies celebrated the death of the person who gardaí believed was one of the most notorious killers in Irish gangland history. Lawlor was the chief suspect in at least five murders.

He was also the chief suspect in the murder and mutilation of 17-year-old Keane Mulready-Woods, whose body parts were scattered across pockets of north Dublin at the start of the year.

While Lawlor’s death is being heralded by those who were his potential targets, police on both sides of the border are trying to piece together who was involved and why.

Several people have been arrested in connection with Lawlor’s murder in recent days but all have been released unconditionally and without charge.

Officers have been working to unravel a complex web in order to understand who was involved in the killing.

In recent days, gardaí received intelligence that close associates of the Dundon crime gang in Limerick were involved in Lawlor’s murder. Officers are now investigating if they had secretly aligned with Lawlor’s enemies from the Drogheda feud.

Investigators suspect that the Limerick gang members, some of whom had actually travelled to Belfast with him, may have double-crossed Lawlor on the orders of those linked to one side of the Drogheda feud.

Lawlor is also suspected of having had links to the so-called New IRA in Northern Ireland. A well-known associate of the dissident group is said to have provided Lawlor with information regarding the Belfast drug scene. He had also used a number of safe houses in the city over the last number of years.

This suggests that the Drogheda feud, with its tangled web of protagonists and passive observers, has morphed from a local gang war to one which gardaí now believe comprises at least five gangs, one of which is the notorious crime syndicate headed by a north Dublin figure.

The players in the Drogheda feud

The feud in the Louth town began in July 2018 when a man was shot multiple times at his home. He survived the attack but is now paralysed from the waist down.

Since the shooting, two gangs have been exchanging tit-for-tat attacks – mainly in the form of firing shots at people’s homes.

Lawlor himself was a gunman for hire who was allegedly behind the July 2018 attack. His involvement in the Louth feud was cemented following the murder of Richie Carberry, Lawlor’s friend and brother-in-law.

The various gangs suspected of involvement have a significant number of young men who act as local dealers, debt collectors and pushers. Lawlor had been involved in drug dealing in the Louth area, receiving support from Carberry, who was shot dead getting out of his car in Bettystown, Co Meath in November 2019.

Lawlor had told associates that a north Dublin gangland figure was behind Carberry’s murder and that it wasn’t the Drogheda gang who killed him.

Gardaí believe the north Dublin gangland figure got involved in the feud as revenge for his murdered friend Ken Finn, who officers believe was killed by Lawlor in February 2018.

Some of Mulready-Woods’ body parts were discovered in the Moatview Gardens area of Coolock, the exact location where Finn was murdered. It is thought Lawlor ordered that the sports bag with the body parts be dumped here to send a message to the senior Dublin criminal.

If this was not tangled enough as it is, the arrests in relation to Lawlor’s murder last weekend have linked Limerick crime factions, the New IRA, and midlands drug traffickers to the ongoing feud.

National garda units are now investigating how something which started as a local feud has now drafted in some of the most vicious and brutal gangland figures in Ireland today.

Criminal factions in Limerick had lost most of their power following serious garda operations targeting the Dundon and McCarthy crime gangs.

While drug crime is still a problem in the city, the rate of it pales in comparison to where Limerick was over a decade ago. However, gardaí fear that the involvement in the gang war in Drogheda could spell a return to serious gun violence in the city.

Detectives are now investigating if those connected to the Dundon gang have had a bigger role in the Drogheda feud than previously thought. Early indications suggest that money laundering, as well as debt collection, was being carried out by these associates.