Fianna Fáil TD has been critical of political standards watchdog during pandemic https://www.youtube.com/watch?v=-NuX79Ud8zI 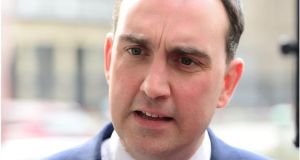 Both Marc MacSharry and his lawyer did not wish to disclose what the legal challenge was related to. File photograph: Bryan O’Brien

Both Mr MacSharry and his lawyer said they would not be commenting on the matter, and did not wish to disclose what the legal challenge was related to.

Mr MacSharry has been one of the most vocal critics of Taoiseach Micheál Martin within the Fianna Fáil party, regularly raising criticism at internal parliamentary party meetings.

Last July Mr MacSharry criticised public servants working from home, who he accused of using the Covid-19 pandemic as an excuse to “lie on the couch and watch box sets” and do the “maximum of the minimum”.

The Fianna Fáil TD told the Dáil he had “dealings” with one State agency where “you have to talk to an answering machine”, as its office was closed and staff were working remotely.

It was later reported that Mr MacSharry was referring to Sipo, though he did not identify the State agency in the Dáil. Mr MacSharry had been in contact with Sipo regarding delays being repaid election expenses by the State body.