Former Fianna Fáil minister Dara Calleary made clear to party bosses that he is prepared to leave the party unless full redress is offered to the victims of the mica saga.

Mr Calleary, a Mayo TD, and other rural colleagues made their views known ahead of Tuesday’s Cabinet meeting which was central to the Government decision not to oppose the Sinn Féin Dáil motion calling for 100% redress.

The threat of several TDs resigning over the issue forced the Government’s hand, sources have said.

There is mounting anger within the party toward Housing Minister Darragh O’Brien’s failure to prevent the major protest in Dublin earlier this week.

Former minister: ‘Sort it out’

At a meeting of the Fianna Fáil parliamentary party meeting last night, Mr Calleary again called on the Government to “sort it out”.

He told the meeting the delays in sorting this out are adding to the “mental torture” of homeowners, and said insurance companies and building suppliers have abandoned the homeowners affected.

Other rural TDs and senators — including agriculture minister Charlie McConalogue, Lisa Chambers, Timmy Dooley, and Niall Blaney — called for 100% redress to be granted. What’s your view on this issue? You can tell us here

At the meeting, Micheál Martin made a commitment that the Government will “once and for all” solve the issue.

“We are determined to deal with the mica issue to help families rebuild their homes,” the Taoiseach told TDs and senators:

We fully recognise that this is devastating for many families. 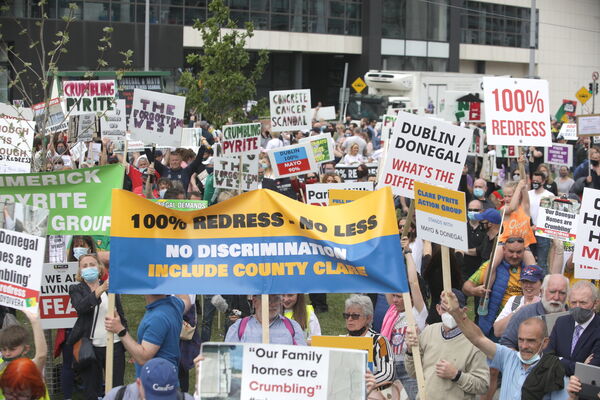 Speaking at Dublin Zoo, the Tánaiste said the cost of renting temporary accommodation should be covered by a redress scheme, but that some limits will have to be imposed on what is paid out by the State:

We are going to sit down over the course of the next six weeks, come up with an enhanced scheme that is much fairer and much more favourable to the people affected, but we do need to put some limits on this.

“As some people said yesterday, it is turning out to be way less than 90% because of the other costs involved, like rent for example, which I believe should be covered, and like some of the upfront costs of having your house assessed,” the Tánaiste said.

Mr Varadkar added that it must be remembered that the scheme will involve taxpayers money: “We need to put some sort of limits or controls on this to make sure that we minimise the costs because … you know one billion or a half billion is a lot of money. It’s the best part of the social housing budget for an entire year — think of it that way.”

At the Fianna Fáil meeting, Mr Martin said he supports in principle the idea of using antigen testing to allow international travel return. Work is ongoing on the Covid cert to allow non-essential travel abroad from July 19, he said.

He also told a meeting held in the Convention Centre that the vaccination programme is driving on:  “We hope to open registration for the 30- to 39-year-olds over the next day or two. “We have to keep the lid on the Delta variant so keep remind ourselves of the basics,” the Taoiseach said. People from the West and North West gathered in Dublin on Tuesday to demand that homeowners affected by mica be given equivalent redress to that afforded to people affected by pyrites in Leinster. Picture: Gareth Chaney/Collins