about 23 hours ago Southern Correspondent 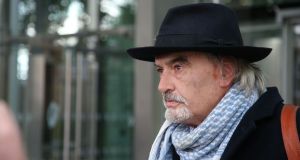 Broadcaster Sky has agreed to a request from the family of Sophie Toscan du Plantier to remove interviews with them from a new documentary on the killing by film-maker Jim Sheridan.

Nobody has been convicted in the Irish courts of the murder of the 39-year-old mother of one. Journalist Ian Bailey, who was arrested twice by gardaí and questioned over the killing, strongly denies any involvement.

Ms Toscan du Plantier’s uncle Jean-Pierre Gazeau wrote this week to Sky, which is due to begin airing the series on Sky Crime on Sunday, requesting that all interviews with her family be removed from the series.

The Irish Times understands that Mr Gazeau and other members of the family were unhappy with the way the five-part series portrayed Mr Bailey and his partner, Jules Thomas, as victims in the case.

The family had seen the series, Murder at the Cottage: The Search of Justice for Sophie, by the six-time Oscar-nominated Irish director Sheridan as part of an agreement that they could view it prior to broadcast.

The family said they had understood the series would be about getting justice for Ms Toscan du Plantier and that was the clear impression they were given at an introductory meeting with the production team in May 2015.

But the family told Sky they could not subscribe to any view that Mr Bailey and Ms Thomas were the victims of “a vast police plot”, particularly after what emerged in a number of civil and criminal trials related to the case.

They cited Mr Bailey’s libel action against newspapers in 2003, his civil action against the Irish State in 2015 and his criminal trial in France in 2019 as offering evidence that challenged the portrayal of him as a victim.

Mr Bailey was convicted of voluntary homicide in his absence and without legal representation following a four-day trial in France in May 2019 and sentenced to 25 years in jail.

The family have claimed the interviews they gave had little to with the original project as it was presented to them as a search for justice for Ms Toscan du Plantier but “rather aims to demonstrate the innocence of Ian Bailey”.

Ms Toscan du Plantier’s family were particularly upset about the fifth and final episode, which showed photos of her body at the scene, as well as how the episode portrayed Mr Bailey’s trial in France.

The episode carries details of developments in the trial that are then juxtaposed with comments by Mr Bailey at his home in Schull as the evidence presented at the Paris court is relayed to him.

At the trial the family’s lawyer, Marie Dose, denounced the relaying of the details to Mr Bailey in Ireland as “a shameful masquerade”.

It is understood Sky pointed out in response to Ms Toscan du Plantier’s family that they had formally agreed to be interviewed for the series and that had given their written consent in 2015 for the interviews to be used.

Sky also rejected any suggestion that the interviews with Ms Toscan du Plantier’s family for the series were obtained under false pretences.

However, Sky said that it would remove the interviews out of respect for Ms Toscan du Plantier, even though they felt the episodes benefited from viewers being able to hear the voices of her family. They also agreed to remove the photos of her body from the fifth episode but left in the footage from the French trial.

Mr Bailey told The Irish Times he had not seen the series even though he had been working with Mr Sheridan on the project for the past six years and had given him exclusive interview access.

“I don’t know what to expect really. I’m hoping that Jim Sheridan will be objective and reasonable – objective would be the word I would use – I don’t want sympathy, particularly, all I want is honest, truthful objectivity.”

Mr Bailey, who has repeatedly denied any involvement in the murder, said he was “mildly curious” about the series but given that he doesn’t have access to Sky TV, it might be some time before he could see it.

Fred’s heart. I just don’t want this man Ian Bailey who has been hounded like a fox by a Hunt made up of men women and dogs. Jim Sheridan mentioned that his poetry is not like that of Dylan Thomas (a friend of Jules Thomas whose father was a psychiatrist) but that his work resembled that of Patrick Galvin, Poet Bard. It would be such a revelation if this documentary could throw up enough evidence and prompt enough recall to establish this man’s innocence and justify why he has received an unfair hearing in a constitutional court in France, which found him Guilty in abstentia and sentenced him to a life sentence, to which he has already endured over the past decades. I am including a poem from Patrick Galvin and maybe people will agree with Jim Sheridan. As for Mr Bailey in search of somewhere to live, the National Union of Journalists is worth making contact with. They assist people who are in hardened circumstances. Poverty at 64 is a sad place to be. I have not read Ian Bailey’s poetry but maybe his luck is about to change.

Message to the Editor Sir –

The Lord pardon the people of this town
Because I can’t.
When I dropped dead in the street
Three weeks ago
I thought they’d bury me in style.
A state funeral was the least of it
With Heads of Government and the Nobility
In attendance.
I even looked forward to the funeral oration
In Irish
With a few words on my past achievements:
Our greatest poet, a seat in heaven to the man
And how I deserved better.

But did I get it?
My corpse lay in Baggot Street
For a fortnight
Before anyone noticed it.
And when I was finally removed
To the mortuary
I was abused by a medical student
Who couldn’t open a bag of chips
Let alone the body of your greatest poet.
Then, to add to the indignity
I was pushed into an ice-box
And some clod stuck a label on my foot
Saying: unknown bard –probably foreign.

If it wasn’t
For a drunken Corkman
Who thought I was his dead brother
I’d still be lying there unclaimed.
At least
The man had the decency to bury me.
But where am I?
Boxed in some common graveyard
Surrounded by peasants
And people of no background.
When I think of the poems I wrote
And the great prophecies I made
I could choke.

I can’t write now
Because the coffin is too narrow
And there’s no light.
I’m trying to send this
Through a medium
But you know what they’re like –
Table-tapping bastards
Reeking of ectoplasm.
If you manage to receive this
I’d be glad if you’d print it.
There’s no point in asking you
To send me a copy –
I don’t even know my address. © 1979, Patrick Galvin
From: New and Selected Poems
Publisher: Cork University Press, Cork, 1996
ISBN: 1859180914

Jim Sheridan re-entered this man’s name to our history of Poetry. What an incredible life history from extreme poverty to being a renowned Bard. This man is included in the Dictionary of Biography.
https://www.dib.ie/biography/galvin-patrick-a9908


Poetry International Rotterdam
© All material on this website is copyright protected. It is made available here without charge for personal use only. It may not be stored, displayed, published, reproduced, or used for any other purpose without prior and written permission by Poetry International.