The fascination with Ian Bailey has become an industry

As long as the Ian Bailey show goes on, Sophie Toscan du Plantier remains lost in the story 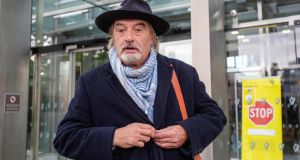 If Ian Bailey doesn’t quite relish the notoriety, he has never done a lot to dampen it down. Photograph: Paul Faith / AFP via Getty

Some victims of violent deaths fade too quickly from our collective memory. How many people recall the name of Sinead Kelly, 21 years old when she was found stabbed to death on the banks of the Grand Canal in 1998, her killer never caught? Who outside her grieving family remembers Nancy Nolan, an 80-year-old former schoolteacher who was murdered by an ex-student on day release from prison in 2000? Or Susan Prakash, beaten to death in the Slieve Bloom mountains that same year?

The messy fallout from the collision of two European jurisdictions, with very different ideas of what constitutes justice, has obscured her memory. So too has the public fascination with a man whose battle to clear his name last week came to the end of another chapter.

The Irish High Court rejected the third attempt to extradite Ian Bailey to France to serve a 25-year sentence, after he was convicted in absentia of her murder.

Bailey has clocked up nearly that much time already embroiled in legal cases arising from her death. He has been subjected to two arrests; a highly public criminal investigation, which culminated in a 2,000-page report, but not enough evidence to prosecute him here; libel cases against eight newspapers, six of which he settled on appeal, and two of which he won; a failed case against the State for wrongful arrest; an initial successful attempt by the State to extradite him to France, which was overturned by the Supreme Court; the trial in absentia in Paris and the final attempt to extradite him.

Now – pending an appeal – the 64-year-old can look forward to living out his days in west Cork, growing vegetables, selling pizza and writing poetry. Except, it’s fair to say, that Bailey has never really seemed to want that. If he didn’t quite relish the notoriety, he has never done a lot to dampen it down.

He courted media attention from the beginning, writing knowledgeably about the murder as a freelance journalist, even after he began to believe he was a suspect. He gave interviews in which he pontificated about his theories. He made theatrical confessions to murder that he later said were “black humour”.

When two radio producers moved to Schull to make the acclaimed West Cork podcast about the case, he had them round regularly for dinner and wine.

Even Bailey’s own lawyer, Dominique Tricaud, acknowledged that the early days of the investigation constituted “the adventure of his life”. Twenty years ago, Daniel du Plantier, Sophie’s husband, remarked acidly of Bailey in an interview with Le Figaro, “He has an amazing new profession: ‘I am not the killer of Sophie Toscan du Plantier’.”

Now, with two documentaries about to hit Netflix in 2021 – one by director Jim Sheridan, with which Bailey co-operated – du Plantier’s assessment seems astute. The fascination with Ian Bailey has become an industry, though not necessarily one from which he is profiting.

There may be no right way to behave after you have been arrested on suspicion of a murder you maintain you didn’t commit. But as far as large sections of the public were concerned, the way Ian Bailey behaved for much of the past 24 years is not it.

In France last week, his ongoing freedom was being seen by some as both an indictment of the Irish legal system and a blow to French pride. “The Irish judges have never tried a murder of this magnitude. They are undoubtedly outdated [or incompetent, take your pick],” raged a man called Pascal in the comments section of Le Figaro.

Another, Sergio, demanded to know: “Is Ireland in Europe for anything other than money and exceptional taxation?” Others urged “un petit repatriement discret” (a “discreet repatriation”) in terms that suggested they were not talking about another legal challenge.

Here, the reaction to the flawed murder investigation and the problematic French trial has been more muted.

Is this down to Bailey himself, his demeanour and his history? Or is it because he is not “one of us”, as his lawyer has suggested? Is there an undercurrent of xenophobia in our own response? “He was a fish out of water. He’s an easy target…He might have been any nationality, but he’s not one of us,” Frank Buttimer says on the West Cork podcast.

This is worth teasing out. Imagine, for a moment, it was not Ian Bailey, but someone more appealing, someone more – let’s just say it – Irish, who had been through what he has: the “thoroughly flawed and prejudiced” investigation; what Bailey’s lawyers maintain was a French “show trial”. Now, imagine this same person’s extradition was sought by the State in the Irish courts – not once, but three times. Now imagine there wasn’t a massive outcry. No, I can’t imagine it either.

The du Plantier family might feel our legal system has failed them. They certainly have legitimate grievances about the investigation. But ultimately, the judicial system did its job. It removed everything from the equation – the tragedy, the 24-year long legal battles, the hearsay, the speculation – until all that remained was the law.

Ian Bailey hasn’t had it easy, but at least he gets to go back to his vegetables, his poetry, his documentaries. There is no such ending for Sophie Toscan du Plantier or her family.

And as long as the Ian Bailey show continues to provide a distraction, there can’t be. Whoever was responsible for her death is still free. And every year that goes by, a little more of her humanity is forgotten.