Poll: Martin should quit as Fianna Fail leader when Taoiseach term over

Micheál Martin should step down as Fianna Fáil leader when his term as Taoiseach ends next year, a majority of respondents to an Irish Mail on Sunday-Ireland Thinks poll believe.

The survey also reveals the Merriongate controversy over the botched appointment of former minister Katherine Zappone as a special envoy has severely dented the public’s trust in the Government.

And in a further blow to the Taoiseach, the poll also shows more than twice as many people believe Tánaiste Leo Varadkar is the more powerful politician in the Government – a point of significant contention in the Fianna Fáil parliamentary party in recent weeks. © Provided by Extra.ie Micheál Martin should step down as Fianna Fáil leader when his term as Taoiseach ends next year, a majority of respondents to an Irish Mail on Sunday-Ireland Thinks poll believe Pic: Julien Behal

The poll findings will heap further pressure on Mr Martin ahead of his showdown with Fianna Fáil rebels early next month.

More than half (54%) of those surveyed said Mr Martin should not lead his party after his term as Taoiseach ends in December next year, when Mr Varadkar is due to return to the top job.

Just 26% said they felt Mr Martin should continue as party leader, with a further 20% saying they don’t know.

Crucially, a significant minority of Fianna Fáil voters think Mr Martin should not lead the party into the next election – 54% of the party’s supporters in the poll are in favour of him staying, but two out of every five – or 39% – believe he should go next December. 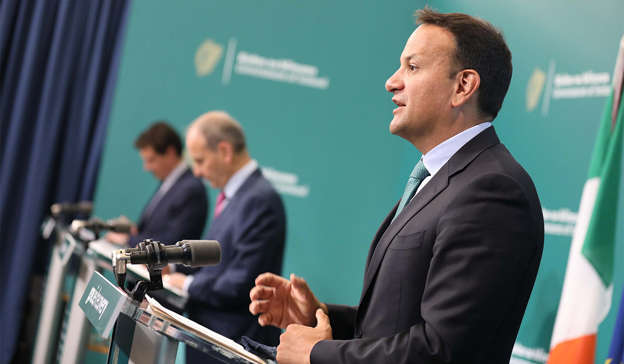 © Provided by Extra.ie Mr Martin’s term as Taoiseach ends in December next year, when Mr Varadkar is due to return to the top jobPic: Julien Behal

Significantly, a clear majority of voters who don’t currently support any of the Government parties are in favour of Mr Martin standing down as party leader. This figure is 65% of such voters, who are part of the electorate that Fianna Fáil will have to win back. This compares to only 16% of non-coalition supporters who want him to stay on as Fianna Fáil leader in the role of Tánaiste.

Last week, the MoS revealed that 11 Fianna Fáil TDs are committed to voting against the Taoiseach in any forthcoming leadership contest. Tensions within the ranks of his backbenchers are fuelled by a perception among several Fianna

Fáil TDs that their leader was too willing to back the Tánaiste and Fine Gael leader, who was widely criticised for attending the controversial event at the five-star Merrion Hotel.

This perception among his critics will be reinforced by our poll, which suggests the Merriongate controversy has strongly eroded public confidence in the Coalition – and Mr Varadkar’s popularity.

The Fine Gael leader’s rating fell to just 3.5 out of 10, which means his rating has almost halved from 6.2 recorded in a comparative MoSIreland-Thinks poll last summer. Mr Martin’s satisfaction rating remains the same, also on 3.5.

© Provided by Extra.ie The poll indicates the public believes the Merriongate controversy highlights a ‘them and us’ divide between voters and their political masters Photo:Gareth Chaney/Collins

The poll indicates the public believes the Merriongate controversy highlights a ‘them and us’ divide between voters and their political masters. Almost three out of four (73%) of those surveyed in the poll said they do not believe our public representatives are going through the same level of sacrifice as the general public. Only 18% said they believe they are enduring the same sacrifices, with 9% saying they don’t know.

Meanwhile, a similar three-infour (76%) said any public representative or senior public servant that attended the Merrion Hotel event should be required to identify themselves. One in five (20%) said they shouldn’t have to say if they attended the event.

The poll also reveals more than twice as many people believe Mr Varadkar is more powerful than Mr Martin. Asked who they believe ‘has the most influence on the direction of Government policy’, 55% chose the Tánaiste, compared to just 25% for the Taoiseach. The third coalition party leader, Eamon Ryan, was chosen by just 3%. © Provided by Extra.ie The findings will come as a blow to the Coalition parties who had been hoping the vaccination programme would give them a bounce in the polls. Pic: Sasko Lazarov/RollingNews.ie

The MoS-Ireland Thinks findings will come as a blow to the Coalition parties who had been hoping the vaccination programme would give them a bounce in the polls.

Broadly speaking, the public is satisfied with the Government’s vaccine programme and measures to combat the virus.

Almost four in five (78%) people rate the Coalition’s management of the national inoculation drive as ‘very good’ (49%) or ‘good’ (29%). Just 14% of those surveyed described the management of the vaccine programme as ‘average’.

© Provided by Extra.ie Government plans to reopen the country after imposing one of the harshest lockdown regimes in the EU have the support of most voters. Pic: Artur Widak/NurPhoto via Getty Images

Mr Martin will be dismayed that the positive view of the vaccine rollout and the Government’s approach to Covid is not translating into support for his party.

It sets the stage for an explosive showdown between the Taoiseach and the growing band of his disaffected TDs when the party meets on September 9 and 10 – a date that was moved back a week.

On Saturday night, Mr Martin insisted that the reporting of Fianna Fáil TDs’ plan to speak out against his leadership at the next party meeting are simply part of the course of politics.

© Provided by Extra.ie Sinn Féin remains the most popular party in the country with support unchanged at 30%. Pic: Gareth Chaney/Collins

Speaking at the homecoming for the Irish Olympic rowers in Farran, Co. Cork, Mr Martin said: ‘They have been going on for years. We will have a comprehensive constructive meeting in terms of the review of our election. And also in terms of future plans in terms of party organisation.’

Sinn Féin remains the most popular party in the country with support unchanged at 30%.

They are followed by Fine Gael on 24% (down one), with Fianna Fáil a distant third on 15% (up one). Support for the Green Party remains unchanged at 4% since last month.