Ireland’s ambulance crisis: ‘There are units going from hundreds of kilometres away to get to Dublin’

One paramedic detailed how the Dublin callouts had left large swathes of the country without adequate paramedic cover. 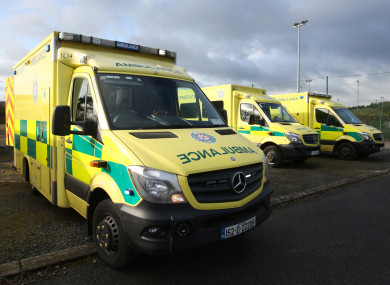 LARGE NUMBERS OF emergency calls in Dublin in recent days have put pressure on the ambulance service, with paramedics having to be diverted from other parts of the country under a system which has been widely criticised.

The system for dispatching paramedics to emergencies has been called “mind-boggling” and union leaders have warned that changes must be implemented immediately to ensure the safety of those who call for life-saving care.

Under the current system, when someone calls 999 for an ambulance, their call is directed to one of two call centres, one based in Tallaght, Dublin, and the other in Ballyshannon, Donegal.

If all the resources are already responding to calls, the job is given to the next available ambulance which could be hours away from where the caller is, according to Siptu’s Ted Kenny.

Kenny, who is an industrial organiser for Siptu’s health sector, said the system is relatively new and that union figures are in talks with the HSE to change it.

He said that it is “mindboggling that it’s allowed to continue”.

He told The Journal: “It’s a crazy situation in the control centres. A call comes in – someone rings 999 – they will look up and where the next available resource is – you might have all the services allocated and the next available one is in Castletownbere [in west Cork] being sent to Waterford city two to three hours away.

Kenny described how the same thing is happening with ambulances based in the midlands heading up to Sligo and Letterkenny and people in Tipperary being sent to west Clare.

“Ten years ago, we had control centres dotted all over the country and they dealt with local calls in their areas and that made sense. Now, it has become centralised and the system just does not work. We are in the process of changing it.

“All these calls are stacking up and the pressure is getting worse for the paramedics.”

The Journal spoke to two paramedics under condition of anonymity. They explained the frailties within the system and said there have been times where somebody has had to wait longer than normal because an ambulance had been sent up to 200km to another destination.

One paramedic detailed how the Dublin callouts had left large swathes of the country without adequate paramedic cover.

“You can get a call from someone about Covid and you attend and they aren’t sick enough to go to hospital or they are terrified that they have it very badly. There were also just your normal callouts as well.

“There are units going from hundreds of kilometres away to get to Dublin. Now, in these situations, you’re always wondering what will happen if someone in your usual region has a heart attack and there’s nobody there to see to them.”

The second paramedic detailed several serious incidents which she said occurred at the start of this week.

She said that there was a “massive amount” of calls in the Dublin area, many of them related to Covid, and that units had to travel up from the south-east and the midlands to fill the gap.

The paramedic then explained that, due to many units being sent to the capital, there was a shortfall in the number of ambulances available for her region.

She said it was “just pure luck” there were not any serious time-sensitive emergenices during the trips to Dublin.

Labour leader Alan Kelly described the current system as “illogical” and said an overhaul of the system is needed to ensure that no life “is lost due to bad planning”.

#Open journalism No news is bad news Support The Journal

He told The Journal: “I have previously submitted questions to the Minister for Health on this issue. I know there was concern in my own area in Tipperary about areas being left without ambulance cover for long periods due to personnel being requested to cover other areas of the country. Paramedics provide an incredible and life-saving service, and they must be empowered to carry out that service as effectively and efficiently as possible.”

Cullinane said he and his party have been contacted by paramedics who are saying the system simply does not work the way it should.

“If the system being used is being criticised by the people who actually use it, then you know there is an issue. It obviously needs to be looked at. It’s something the health committee should examine. I think it would be appropriate to shine a spotlight on the system and to review its effectiveness.

“This is one of these issues that keep coming up. There is a lack of capacity and resources. These paramedics are often responding to very difficult circumstances and tragedies. For many, they are exhausted. We need to focus on shining a spotlight on their work and seeing what we can do to improve it.”

The HSE defended the practice and said that ambulances are not confined to work in “geographical areas”.

A spokeswoman said: “All calls to the NAS are triaged and responded to appropriately – the nearest and most appropriate response is dispatched with the most urgent calls prioritised.

“The ambulance service operates on a national basis and mobilises responses to calls for assistance based on patient needs, ambulances may travel to various locations irrespective of their base as they are not confined to work in geographical areas.”

Paramedics have also been asked to cross the border to help with Covid cases in the North. The health system there is currently running at 108% capacity, according to its health service.