Zappone ‘has not considered’ resigning over McCabe and Tusla revelations

The minister has been in the firing line over a meeting with garda whistleblower Maurice McCabe. 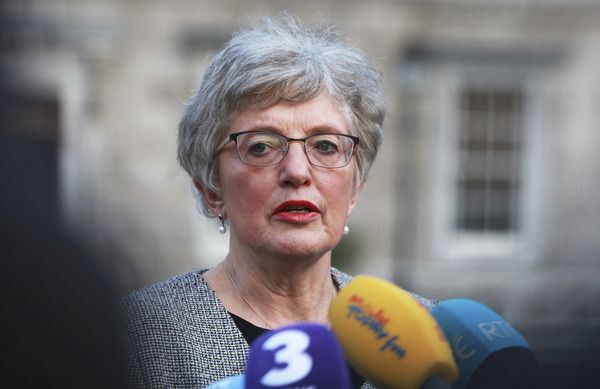 A government spokesperson said that the Taoiseach was not aware of the details, or of the “very serious and disturbing issues” that arose at this meeting.

Speaking at her first public appearance since the scandal broke, Zappone said she spoke to the Taoiseach before the Cabinet meeting – but that she kept the highly sensitive allegations made about the whistleblower to herself to protect McCabe and his wife.

Asked if she had considered her resignation in recent days, Zappone said: No, I have not, I have a job to do, I am the only independent member at the Cabinet table, I think I bring a unique perspective and I want to continue to do that.

This statement by Zappone is in contrast to what Taoiseach Enda Kenny told RTÉ Radio’s This Week yesterday.

The Taoiseach said that as “Minister Zappone, who is doing a very good job, was meeting Maurice McCabe in a private capacity I simply said ‘do make sure you have a very thorough account of it’”. So when we had our cabinet meeting on Tuesday I wouldn’t have had any details.

When asked again if he had known what was the context of the McCabe – Zappone meeting, the Taoiseach replied once more: “No, as she was meeting him in a private capacity”.

Zappone clarified she told the Taoiseach that she had met with the McCabes and had discussed there were allegations related to Tusla, and “that was the nature of the conversation, that was the extent of the detail”.

In a statement, a government spokesperson said: “Minister Zappone, as Minister with responsibility for Tusla, engaged with Maurice McCabe about very sensitive and personal matters. She quite rightly respected his right to privacy and confidentiality in relation to these matters. As the Taoiseach has said previously, he was not aware of the details, or of the very serious and disturbing issues that arose at the meeting.

“As Minister Zappone confirmed today, she did not divulge any of the details of these very serious issues to the Taoiseach or to anyone else in Government. This was absolutely the correct course of action.”

She also said she has asked HIQA to carry out a statutory investigation of the situation so “we can begin to restore public confidence” in Tusla.

The Tánaiste Frances Fitzgerald and Zappone have spoken since her return to Ireland, added the Minister. Source: TheJournal.ie/YouTube

Minister Zappone also said today that the McCabes asked for the Tusla files related to McCabe to be eradicated.

She said the couple told her about what is contained in the file which was discussed in the Prime Time show.

“It was shocking, and it was devastating for them,” said Zappone. She said that impact “translated into the most vile, graphic and false allegations” against McCabe.

She said it shows in her view an “unacceptable breakdown of procedures and the impact that had”. 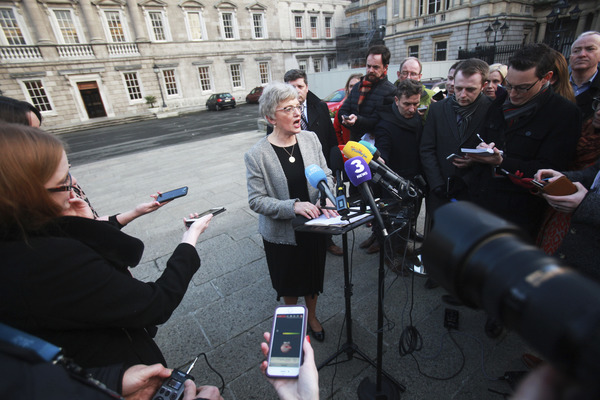 In addition, the minister said that the public requires reassurance that “the mistakes acknowledged in this case cannot arise again in Tusla’s Child Protection and Welfare Services”.

On her meeting with the McCabes, Zappone said:

“I met Lorraine and Maurice McCabe on 25 January. And the heavy burden of the hurt and devastation that they felt was so apparent to me particularly in their faces, their body postures and the words that they used. They spoke very truthfully of the devastating impact that this has had on their family the various wrongdoings they have communicated to me. They told me that the most recent development of the information they had received through the Freedom of Information request with regard to Tusla was worse than anything else that had happened to them. And I was also deeply conscious of the fact that it was the State that almost destroyed their family and that as I sat there listening to them, I was an agent now of the State.

She said she was determined that as a government minister she would “not cause [the McCabes] any additional hurt”.

“And they have now and will always have my support.”

The Children’s Minister had been in Seattle this weekend and has only just arrived back in Ireland.

She had come under pressure in the last number of days to clarify what she knows about false allegations being made against whistleblower Maurice McCabe. Last week, it emerged that due to an administrative error, incorrect information was copied-and-pasted by a HSE counsellor into a document for Tusla, about McCabe.

The incorrect information wrongly referred to a child sex abuse allegation. The details of the situation were revealed on Prime Time last week. Tusla apologised to McCabe for the error.

However McCabe and his wife Lorraine told RTÉ News that they decided to have no further engagement with the HSE or Tusla after both offered him apologies.

On Friday, Minister Zappone released a statement saying that she became aware of the circumstances when McCabe’s wife contacted the office of the Minister for Health Simon Harris on 18 January. Zappone later met with the couple on 25 January.

Zappone said she informed the “relevant Government colleagues” of the false Tusla file.

Phonecall with the Tánaiste

The Tánaiste Frances Fitzgerald told RTÉ’s Week in Politics that Zappone informed her and the Taoiseach Enda Kenny about the meeting, but never gave any detail of the nature of the meeting.

“Katherine Zappone telephoned me on the day she was meeting Maurice McCabe, 25 January, I remember distinctly taking the call,” she said. I said ‘thanks for calling Katherine’, and that was it. Obviously I wasn’t going to say yes or no, it wasn’t my business, that was the conversation I had with her.

Asked directly was she aware that Tusla had kept a false allegation of sexual impropriety against McCabe on file for nearly two years after it had been debunked, she replied “no I wasn’t aware of that”.

“As Minister Zappone has clarified, she would have said something (at Cabinet) if she felt it needed to be said,” she said.

Asked why, as Minister for Justice, she had not followed up on Zappone’s meeting with McCabe, who has been at the centre of the whistleblower scandal for over three years, Fitzgerald said:

“I was respecting the integrity of her meeting with him (McCabe). Maurice McCabe has been subject to an awful lot of hassle. I did not know the facts as they emerged.”

Read: Tusla to appear before Dáil committee next week as McCabe controversy rumbles on>