The residents of Healy Terrace in Ardnaree gathered last Friday afternoon for the unveiling of a mural and plaque hin memory of Michael Gaughan, a Republican hunger striker who died in Parkhurst Prison on the Isle of Wight, England in 1974.

The committee behind the commissioning of the mural, from Ballina Community Clean-Up, is hoping Gaughan’s legacy and story will live on through the mural, painted by Leslie Lackey, and the plaque designed by Gerry Ginty.

The mural features a portrait of Gaughan inscribed with the words ‘Take Me Home To Mayo’, a phrase taken from a song written about Gaughan by Seamus Robinson, while the plaque contains his final words before his death.

Sinn Féin Deputy Rose Conway-Walsh was in attendance and read out several letters Gaughan sent from prison to friends and family, which were never made public before. Barrister and GAA analyst Joe Brolly was also in attendance and gave a talk on the history of hunger strikes and the importance of commemorating Irish history.

“No one should apologise for this beautiful memorial to one of our own,” said Mr Brolly. “The beauty of this is that young people will come here and say, who is this person? And they will investigate that and make their own minds up about what happened.” 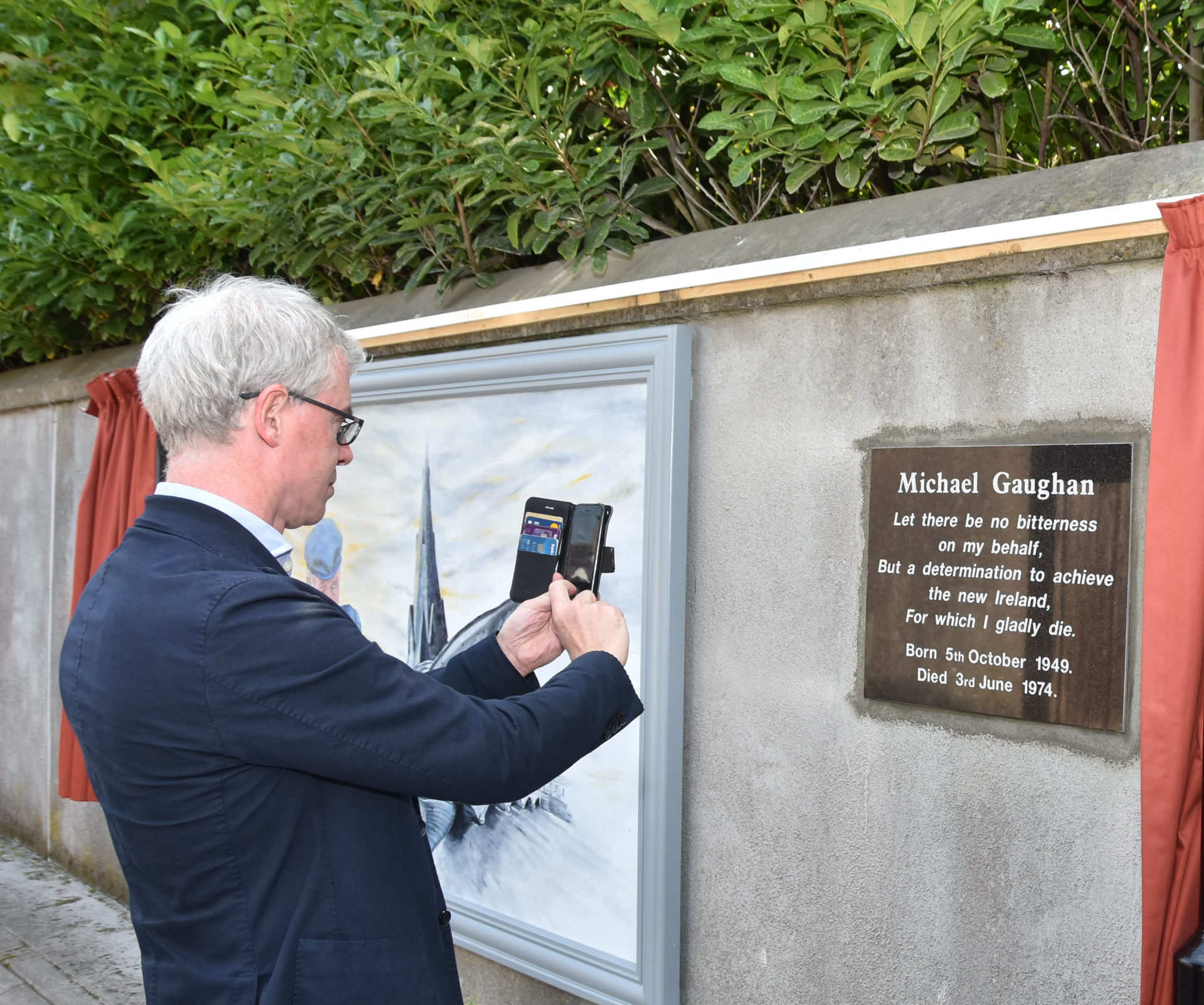 Joe Brolly takes a photograph of the memorial plaque that accompanies the mural at Healy Terrace in Ballina. Picture: John O’Grady

Several of Gaughan’s friends were present for the unveiling, including Davy McDonnell, who was a driving force behind the mural. Following the unveiling of the mural, Mr McDonnell led the gathered crowd in a rendition of ‘Take Me Home To Mayo’.

“I’m proud as punch with this mural. It is a great way to remember our friend as we knew and that’s what we hope to have achieved. Ardnaree people always remembered Michael Gaughan for who he was and how we knew him. I have great memories of when we were younger, playing together and swapping our comic books,” said Mr McDonnell.

Independent Cllr Mark Duffy said murals such as this are essential in keeping the history of the town alive.
“It is a great day to remember an iconic figure associated with Ballina. We live in a peaceful society but it is important we remember all of our different historical figures as we approach the 300th anniversary of the town in 2023. Ballina would be nothing without the people it produced and the sons and daughters who made it what it is today.”

David O’Malley of the Ballina Community Clean-Up said this mural is another great step forward in the group’s plans, following the tribute to Jack Charlton revealed last month.

“This is all about invigorating the town and promoting our history. Everyone who is a landmark of this town is being remembered in this way. If you Google Ballina, it is synonymous with Michael Gaughan and with all of the people who we plan to commemorate next.