“These students are doing their best, but they’re just not able to make ends meet.” 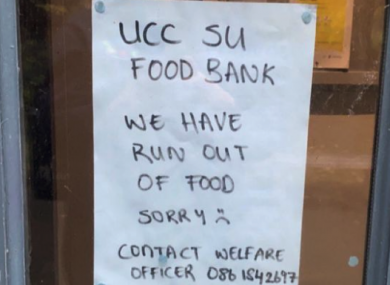 VOLUNTEERS HAVE BEEN quietly manning food banks at universities across Ireland for many years but the issue has risen to national prominence this week as students’ representatives say the cost of education and accommodation is leaving many under severe financial pressure.

At least three colleges which run food banks for their students told The Journal that demand has spiked in the face of rent hikes and other living costs. The food banks, which are usually operated by Chaplains’ offices or students’ unions, have helped many students cope with the cost of college.

“There is a cohort of students who barely survive and do not have family support, as they too are barely surviving,” explained Shay Casey, the chaplain of TUS Athlone.

“The influx of students into the Dublin region has meant that many landlords had the capacity to increase rents, or – under the table – charge students more than they would otherwise,” O’Reilly explained.

“So it left students in quite a precarious situation where they had no other choice but to accept higher levels of rent. And that takes away from their disposable income for other things,” he added.

In the aftermath of the students’ union food bank at University College Cork running out of food in less than an hour on Wednesday, USI president Clare Austick says the Government needs to boost funding to third-level education to alleviate the financial burden on students.

“Many students are really, really struggling financially and it’s gotten to the point where they have to go to a food bank to try and get food,” Austick said. What we’re seeing in Cork is just a fraction of what’s happening across the country, It’s across the board. The way the education system is funded in Ireland, it’s basically a broken system.

The comments were echoed by Maeve Richardson of UCC Students’ Union who said there was a notable amount of students seeking financial assistance and expressing concerns about food insecurity.

“I can’t stress enough that these students are doing their very best. They’re working part-time jobs. They’ve done everything to get the cheapest rent possible.

“It’s just, with the price of rent and the cost of living in Cork, alongside the highest student fees in the EU, that they’re just not able to make ends meet,” Richardson said.

The UCC food bank offers students non-perishable foods such as pasta, cereal, tinned meats and beans, tea and coffee. This week it was also able to offer fresh vegetables and bread which were donated by a supermarket.

It also provides hygiene products such as mouthwash, deodorant, toothpaste and tampons.

The weekly food bank is open for two hours on Wednesday evening and students can also book an appointment if they cannot attend at that time.

Richardson, who is the SU’s Communications and Engagement Officer, says many students pay between €200-€260 per week on accommodation.

At TUS Athlone, a group of volunteers and the Chaplaincy team have run a food bank in the college six nights a week for many years.

The group collects the groceries from a local supermarket every night except Saturday and delivers it to various blocks of student accommodation.

“We can have about 80 kgs of mixed food from veg to meat and bread. It’s always taken up and some students tell us they would be hungry only for our help,” Casey told The Journal.

“It does take a lot of effort and dedication but when you see the results, happy faces and welcome you receive, it’s very worthwhile.” There is a constant demand for such services and when you see the budget those students live on its easy to see why.

The issue was raised in the Dáil yesterday, where People Before Profit/Solidarity TD Mick Barry told Tánaiste Leo Varadkar that the scenes at UCC should cause members of the cabinet to “blush, if you had any shame.”

“Under this Government thousands of students are literally surviving on rations. How could it be otherwise when we have the highest student fees in all of the European Union, and we have students forking out €700 and more per month, just for a box room,” Barry said.

Responding to the Cork TD, Varadkar said many students are struggling financially due to rent, food, fees and other costs.

The Tánaiste announced that the Student Assistance Fund has been doubled to €17.2 million in recognition of the fact that some students are facing “serious hardship”. Varadkar added that €596,000 of that figure has been allocated to UCC to assist students “who are in real financial need”.

Richardson said it was “heartbreaking” to run out of food and turn students away this week. It was very emotionally draining [on Wednesday], we were doing everything to be as upbeat as possible, to talk to the students and try to keep them happy and everything like that. They were delighted to receive the help from us but for us as officers it’s heartbreaking.

The SU member also paid tribute to the generosity of the wider student body in UCC who responded to the depletion of the food bank with a raft of donations of money, food and hygiene products.

A fundraiser has also been set up to raise money for the food bank. The charity drive quickly surpassed its €5,000 target and nearly €16,000 had been raised at the time of writing.

Richardson said the money will help fund the food bank for several months.

“We are very thankful that this has gotten so much attention and that so many people have been so generous, but the harsh reality is that this is what third-level education and the housing crisis has done to third level students,” Richardson said.

USI President Austick said the situation highlights that supports such as the Student Assistance Fund and the Student Universal Support Ireland (SUSI) grant are not adequate.

“This is a result of colleges not being funded by the Government,” Austick said.

The USI is calling for the student contribution charge to be eliminated, for affordable, college-owned, student accomodation to be built and for financial supports for students to be increased.

“There has to be significant investment into the system, it can’t be once off, it has to be annual, it has to be sustainable,” Austick added.The Government needs to recognise the importance of third-level education and what it can do for the economy. It’s also about making sure that everyone can access it, regardless of their background. It really does just come down to funding.