The garda had his car robbed by the criminal who then put on his uniform and posted a “callout” video on social media. 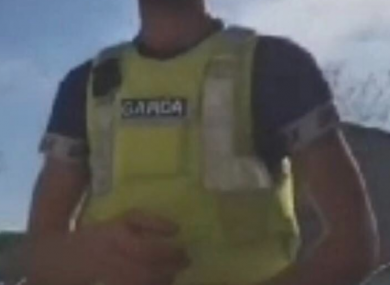 A screengrab of the man wearing the garda’s stab vest. Image: TheJournal.ie

AN INTERNAL GARDA investigation is underway after an officer had his uniform and garda hat stolen from his car after he attended a party at a convicted drug dealer’s home.

The garda had been socialising with the criminal in a town in the east of the country, and had fallen asleep on a couch in the house. He awoke at 6pm to find his car gone.

Gardaí on the beat recognised the garda member’s car and spotted two men in the vehicle that were not their colleagues. One of the people in the car was wearing a garda hat and stab vest with the official garda lettering on it.

The car was pulled over and the driver was arrested for drink driving.

The garda whose car was stolen has filed a formal statement saying his vehicle was robbed and that the two men who were driving it did not have his permission to do so.

Gardaí investigating the case later discovered that a video had been shared on social media showing the arrested man and his friend conducting a so-called callout video. Both men are wearing garda hats and one of them is brandishing what appears to be the official garda ASP (baton).

While gardaí are investigating the theft of the vehicle, TheJournal.ie understands that an internal investigation has been launched to ascertain why the serving garda was socialising in the home of a convicted drug dealer. He does not work in the locality but at another station in the east of the country.

The drug dealer in question received two suspended sentences last year after pleading guilty to charges of having drugs for sale or supply.

A spokeswoman for An Garda Síochána said: “Gardaí are investigating all the circumstances of a number of connected incidents that occurred in [town named] on the 20 April 2020.

“An Garda Síochána does not comment on ongoing internal disciplinary investigations.”