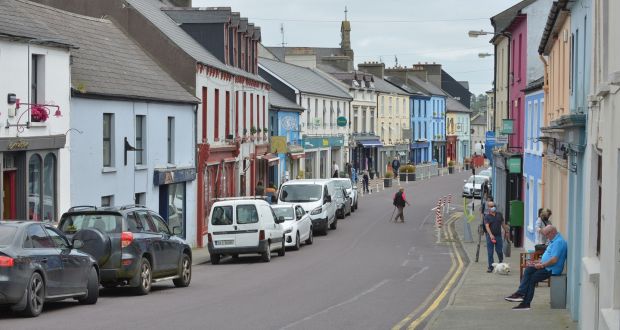 Main Street, Schull: As the village’s brightly painted cafes and pubs shook off a year or more of Covid restrictions, the murder of Sophie Toscan du Plantier has still not gone away. Photograph: Daniel Newman

Since the murder of French film producer Sophie Toscan du Plantier 25 years ago, the grim saga has overshadowed the scenic coastal village of Schull on the Mizen Peninsula in west Cork.

The 39-year-old mother of one had come to view her Irish holiday home as a retreat from her celebrity life in Paris until she was found brutally murdered near her home two days before Christmas 1996. Despite lengthy investigations, the murderer was never found.

This week the pretty coastal village was abuzz as its brightly painted cafes and pubs shook off a year or more of Covid restrictions. It may not be evident as the visitors sip their lattes, the tourists peruse the art galleries, the locals collect their groceries and the teenagers return from sailing lessons but the murder of Sophie Toscan du Plantier has still not gone away.

The confluence of two documentaries last week, Jim Sheridan’s Murder at the Cottage – the Search for Justice for Sophie on Sky Crime and a new Netflix series, Murder in West Cork, has put Schull in the spotlight again.

Ms Toscan du Plantier’s former neighbour, Shirley Foster, who discovered the film producer’s body that fateful morning, says she won’t be watching the documentaries but she has seen it all before – media publicity leading to a surge in people coming to the house.

“We had people bringing their grannies and their small children to look at the cross marking where Sophie was found, and then some of them were cheeky enough to drive up to the house and peer in the windows – that sort of thing.

“It was very voyeuristic and every time there was some comment or story in the newspapers, they used to start coming. So I expect it will be the same now with people coming up the driveway on foot of these documentaries.”

It’s a similar story down in Schull, where one woman, who didn’t want to be named, told how she used to have visitors calling to her shop to ask directions to the murder scene. Like Foster, she won’t be watching the documentaries.

“I’ve had people coming in to me wondering where the murder happened. I just think it’s awful – it’s just taking away from the horror of what happened and how violent and brutal it was because it was a shockingly violent crime.

“That sense of responsibility for what happened to Sophie here still lingers because people knew Sophie and she was lovely and I feel for her family because it’s still unsolved and I don’t think these documentaries are helping. And the person who is the suspect, he loves the publicity… and thrives on it.”

Ian Bailey, whom gardaí say remains a suspect for the murder and who was convicted in his absence and without legal representation at a trial in France in 2019 of the voluntary homicide of Ms Toscan du Plantier, has repeatedly denied any involvement in the killing.

On Wednesday, Bailey, who moved to Ireland from the UK in 1991 and has lived in Schull since 1992, could be seen in his shorts and white fedora as he sipped a coffee and made notes outside Nicky’s Kitchen at the town’s east end.

Another woman, who also declined to be named, had come to live in Schull relatively recently, and said she too had become familiar with the grim story.

“I think if people want to pay attention to the murder, they will but if they don’t, they just really turn off because it’s too traumatic for them,” she said. “But he [Ian Bailey] loves the attention, it’s an opportunity for him to sit out and watch people watching him.”

Cheesemaker Bill Hogan, who worked with Martin Luther King Jnr on the US civil rights campaign  in the 1960s, later moved to Schull, where he befriended Sophie Toscan du Plantier.

“It has never become a cold case – it always comes back to life – it’s just an unresolved situation that is going on now for over 20 years and I think the older people here, who know about it, have that sense of the incompleteness of it.

“It just simmers away and the two documentary series have brought up a lot of associations – not everybody has the Sky Crime channel, but people certainly did watch it.

“Of course, the other thing that is a constant reminder of it all is that Ian Bailey does present himself around the place quite frequently – whether in the shops or down on the pier or wherever – he has a presence like a billboard.”

Another woman, who would not be named, said: “I think the murder is like a cloud over the town really, which is a pity because it’s a beautiful place and people here are really embarrassed by it and they don’t like to focus on it because a lovely person, who loved it here, was killed.

I’m here 40 years – the overwhelming sentiment and
my grasp of it, such as it is, is that people feel sorry
for him [Bailey]

“There seems to be a lot of interest in it all again, I get people texting me from Dublin wondering what the real story is, but in a way it has never gone away and Schull will always be associated with it.”

Not everyone is of the same view. A man in his 60s, who declined to be named, offered a different take on events, even though he too will not be watching either the documentary.

“I’m here 40 years – the overwhelming sentiment and my grasp of it, such as it is, is that people feel sorry for him [Bailey].” He thinks most locals don’t believe Bailey had anything to do with Ms Toscan du Plantier’s murder and that he was treated unfairly by the Garda.

“The killing doesn’t impinge on everyday life here. I won’t be watching the Sky series because I’m fed up with it all and I just think that chap Sheridan is just trying to make a name for himself.”

Schull postmaster Tom Newman, who works in the centre of the village, has followed the many twists and turns in the long-running story over the past 25 years. For him, it can all be whittled down to a central truth.

“We all get on with our lives, people come down from Cork, but whenever I go, say, down to Kerry, the murder comes up when I tell people I’m from Schull and everyone mentions it. So it’s never faded from the public consciousness.

“This case crops up so much between the various court cases [involving Ian Bailey], the libel case, the High Court case and the extradition case. And now you have the Sky and Netflix documentaries and we’re all discussing it again.

“But for me personally, a woman has been murdered and she was somebody’s wife, somebody’s mother, somebody’s daughter, somebody’s sister and that’s the really sad thing, and I think all this kind of circus act has just followed it.

“I just think the good, decent people of Ireland want somebody to be charged – they want the murderer to be found and some rest for Sophie’s elderly parents and her poor family; people just want to see it finally sorted for their sake.”