Many COVID vaccine conspiracy theories target Blacks: Here’s why they can work 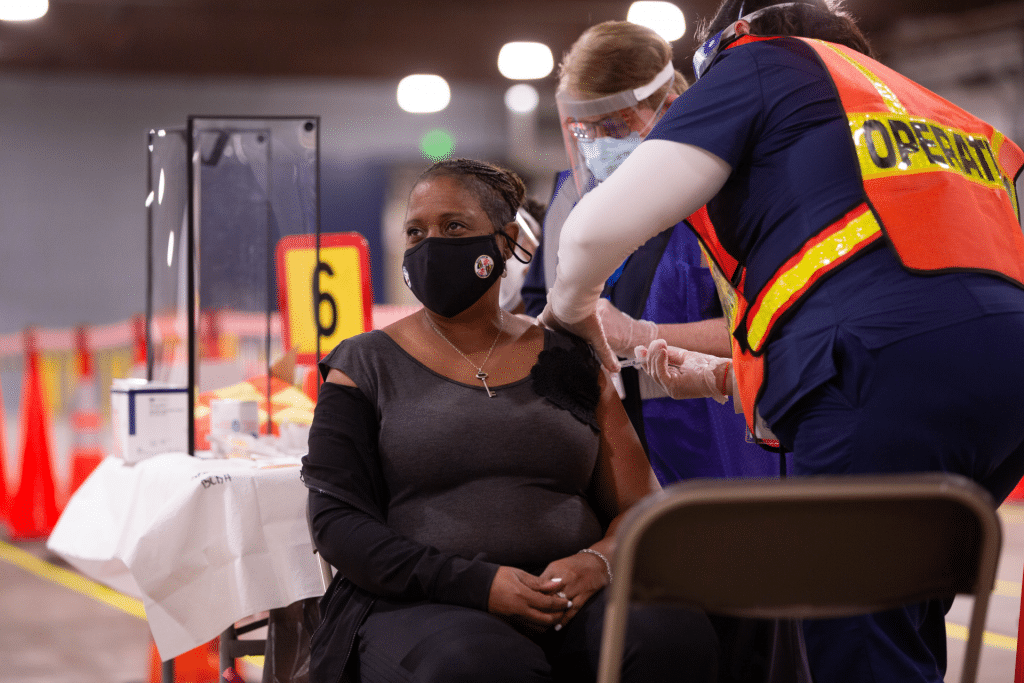 Some 53 percent of US adults get news from social media. They consume information in a zone in which inaccuracies spread far and wide, often on the back of emotional content that appeals to people at their cores. We’re talking about identity—a complex human construct that people (and countries) cling to so strongly, they sometimes find it worth fighting or dying for.

Creating identities is a group effort. For as long as there have been homo sapiens, people have analyzed themselves and asked who they are and what they stand for, usually in the context of the people around them. But in an age when identity is shaped online, social media platforms have found a way to hijack the process. Through likes, memes, shares, and other digital connectives, people are forming a picture of their inner selves and helping others to do so as well—not always for the better. By targeting identity, mis- or disinformation can take root in people, making it difficult for even a close friend to re-direct someone from his harmful (and false) beliefs.

I have a friend, a Black man in his 40s, who didn’t want to get the COVID-19 vaccine. A steady stream of social media posts from his friends affected his decision. White people, he said, are tricking Blacks into getting the vaccine for nefarious reasons. I asked him why whites would go to such an extent to hurt Black people when they are taking the vaccine themselves. My friend couldn’t answer; a deeper critical analysis was secondary or not important to his calculus.

My friend’s life has been marked by considerable difficulties, economically and socially. He has a high school education, and grew up in an environment where Black men like him were considered suspects on any job where problems occurred. A trip to Europe on an athletic scholarship opened my friend’s eyes to a larger world, but his world closed again when he returned to the United States and to the reality of being unable to find steady work and housing. He has never found a long-term opportunity to improve his social standing. Over the years, the people he learned to trust most were those of the same socio-economic status, friends who understood the hardships of making rent or buying food.

People like my friend don’t tune in to watch Wolf Blitzer, the CNN anchor. Many don’t even have televisions. Instead, they use apps on their phone and tune in to people who talk like them and share vital information. Analysis isn’t important; trust is. With my friend, who didn’t want to be named in this article, misinformation posted by friends that the vaccine is harmful is what ended up sticking.

Identity and misinformation. People tend to trust others who are like them, people who are part of “their” group. They resist information that goes against the beliefs of their “tribe,” even when those beliefs are false. Research shows posting fake news can be as much about bolstering a sense of group identity as it is about ignorance. RELATED: Best of 2021: Emerging experts on nuclear risks and climate change

Black people are the least vaccinated group in the United States. A Kaiser Family Foundation analysis found that as of Dec. 13, 51 percent of Blacks had been vaccinated with at least one dose, compared to 58 percent of whites. Substantial parts of the Black population continue to reply in surveys that they do not plan to get the COVID-19 vaccine. In my friend’s case, social media, identity, emotional posts, and disinformation helped inform his decision.

During my conversation with my friend about vaccination, he danced around the facts I presented about the COVID-19 vaccine, bouncing between evidenced-based analyses and the Black identity he shared with his social media friends. He agreed with my argument that vaccines had been proven to be safe and effective, but ended his sentences by saying that he still was not getting the shots.

My friend’s identity, and thinking, clearly followed the path his Black community of friends on social media had laid out. Why?

Some psychologists believe that reasoning didn’t develop to always point people to rational answers. Since pre-historic times, reasoning may have developed as a tool that supports the group dynamics that are necessary for life and livelihood. “Habits of mind that seem weird or goofy or just plain dumb from an ‘intellectualist’ point of view prove shrewd when seen from a social ‘interactionist perspective,’” The New Yorker’s Elizabeth Kolbert wrote in a piece on the work of the cognitive scientists Hugo Mercier and Dan Sperber.

Throughout history, it may have served humans well to drop strictly logical reasoning in favor of surviving as part of a group. But today, the harm of anti-vax mis- and disinformation is real and believing lies can be lethal, particularly tough-to-shake ones that conform to your group identity.

Emotion and social media. Add emotion to identity-based falsehoods and one can brew a particularly toxic stew. Emotional states—including, especially, anger—affect how people take in information and consider its accuracy, exacerbating the dynamics of group-think online. For instance, when partisans in one study read falsehoods that made them angry, their intake of information was less accurate than when they read neutral posts. Once an attitude or belief is blended with emotion, changing it is like trying to change someone’s DNA.

In 2018, Facebook changed the algorithm that determines what people see in their news feed to boost engagement, using likes, reshares, and other measures of engagement as a metric for boosting the spread of posts. The change made the platform “an angrier place,” according to a Wall Street Journal investigation. “Misinformation, toxicity, and violent content” was common in the posts that got reshared, which also were favored by the new algorithm. It’s not hard to understand why. Reading or viewing emotionally charged information is addictive, and the adrenaline rush of the fight or flight  response makes a person feel stimulated, alive. RELATED: “Anti-5G” jewelry and sleep masks are radioactive

Many anti-vaccine posts targeted at Blacks have been intended to stir anger. In one example, some posts aimed to counter news from the White House that a Black female scientist Kizzmekia Corbett had been instrumental in developing the Moderna COVID-19 vaccine. One such post compared Corbett to the Black nurse who had recruited participants to the infamous US government-run Tuskegee experiments, in which Black subjects were not given proper treatment for syphilis, as if to suggest Corbett was involved in a malicious plot.

The conversation with my friend ended in anger—me in my corner, and he in his. He stood by his belief that the COVID-19 vaccine causes a three-month coma. What could I say? Beliefs are powerful.

I worked with community participants on a recent outreach survey as part of the Digital Informers at Howard University, a group working on mis- and disinformation targeted at Blacks. During the study, I saw older Black male participants dissuading younger Black participants from taking the survey. My work was interrupted several times by men ages 55 and older who spouted inaccuracies about how survey data would be used.

One interrupter passionately proclaimed that the data would be used by the governments of England and the United States, in combination with US hospitals, to harm Blacks. He explained that his interruptions were an effort to protect his people and stop any mistreatment that the survey might foster. His reasoning was motivated by a fear that whites were finding innovative ways to hurt Blacks. Such logic develops when people are mistreated over hundreds of years: Think about how a legacy of slavery, Jim Crow, marginalization within institutions, and race-related murder by police could affect someone’s level of trust; it’s a logic that applies online and in real life.

The repetitive nature of the conversation with my friend about the COVID-19 vaccine was one that fit the definition of insanity—doing the same thing over and over and getting the same results. In this case, the conversation strengthened psychological resistance on both our parts. Motivated reasoning made his non-factual beliefs, taken from social media, stronger than the countering and completely factual evidence I asserted. Facts and evidence were trumped by the pre-existing beliefs entrenched within his identity.

For psychological resistance like the kind my friend had formed against vaccines to break down, people often must discover the truth on their own. Trying to reason—to convince someone to change his or her mind based on facts—seems ineffective if people are under the spell of emotion. Maybe it’s a spell only broken by another emotional experience, perhaps one that is life threatening, like going to the intensive care unit with COVID-19.

As the coronavirus crisis shows, we need science now more than ever.

The Bulletin elevates expert voices above the noise. But as an independent, nonprofit media organization, our operations depend on the support of readers like you. Help us continue to deliver quality journalism that holds leaders accountable. Your support of our work at any level is important. In return, we promise our coverage will be understandable, influential, vigilant, solution-oriented, and fair-minded. Together we can make a difference. Support the Bulletin

There is the more obvious explanation–the lack of a family doctor. It is a big scary medical world where the question is who you trust. If you have had a family doctor for a long time–that is more important than anything else. Institutional medicine does not create trust 0 Reply

Angela R. Pashayan is finishing her doctoral studies at Howard University in Washington, DC. Her expertise in political science and international… Read More

Best of the Bulletin, 2021: Beyond words

Do we need a new vaccine for omicron? Fauci says not yet, other experts disagree

Are you alarmed enough by omicron? Probably not.

Amid a public health crisis, the Supreme Court could be poised to stop Biden’s vaccine mandates

The A1 Verse: The stain of love is upon the world

Best of 2021: Emerging experts on nuclear risks and climate change

The nine best climate stories of the year

Best of the 2021 Bulletin magazine

Best of the Bulletin, 2021: Beyond words

Many COVID vaccine conspiracy theories target Blacks: Here’s why they can work