Le Pen has softened her public image, but top priority of her program is to prioritize French citizens over migrants, as Macron tries to eat away at same base

PARIS (AP) — From attacks on “wokeism” to crackdowns on mosques, France’s presidential campaign has been especially challenging for voters of immigrant heritage and religious minorities, as discourse painting them as “the other” has gained ground across a swath of French society.

French voters head to polls on Sunday in a runoff vote between centrist incumbent Emmanuel Macron and nationalist rival Marine Le Pen, wrapping up a campaign that experts have seen as unusually dominated by discriminatory discourse and proposals targeting immigration and Islam.

With Le Pen proposing to ban women from wearing Muslim headscarves in public, women like 19-year-old student Naila Ouazarf are in a bind.State of Jerusalem: The MaqdasyinKeep Watching

“I want a president who accepts me as a person,” said Ouazarf, clad in a beige robe and matching head covering. She said she would defy the promised law should Le Pen become president, and pay the eventual fine.

Macron attacked Le Pen on the headscarf issue in their presidential debate Wednesday, warning it could stoke “civil war.” But polls put Le Pen closer to Macron than she was in their last runoff five years ago. And in the first round, far-right candidates Le Pen and Eric Zemmour together collected nearly a third of votes.

France has no hard data on voters’ race or religion because of its doctrine of colorblindness, which sees all citizens as universally French and encourages assimilation. 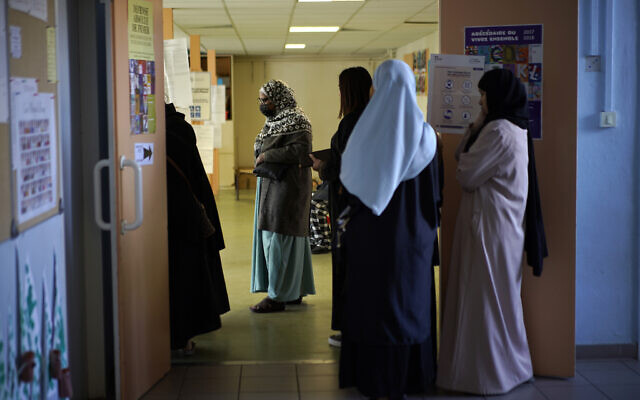 Women wait in line before voting for the first round of the presidential election at a polling station Sunday, April 10, 2022, in the Malpasse northern district of Marseille, southern France. (AP/Daniel Cole, File)

Le Pen’s National Rally party, formerly called the National Front, has a history of ties with neo-Nazis, Holocaust deniers and militias who opposed Algeria’s war for independence from colonial France. Le Pen has distanced herself from that past and softened her public image, but a top priority of her program is to prioritize French citizens over immigrants for welfare benefits, which critics see as institutionalizing discrimination. She also hopes to ban Muslim women from wearing a headscarf in public, toughen asylum rules and sharply curtail immigration.

She has gained ground among voters since 2017, when she lost badly to Macron. This time around, Le Pen has put a greater emphasis on policies to help the working poor.

Le Pen can also thank the rabble-rousing Zemmour, who came in fourth in the first-round vote, for boosting her popularity by making her seem softer. Zemmour has been repeatedly convicted of inciting racial or religious hatred, and has promoted the baseless “great replacement” conspiracy theory, used as justification by white supremacists who committed massacres in New Zealand’s Christchurch, in El Paso, Texas, and in a California synagogue.

“Eric Zemmour’s presence placed the issue [of Islam and immigration] on the side of aggressive and violent stigmatization,” Cecile Alduy, a Stanford semiologist who has studied Zemmour’s language, told The Associated Press. “Meanwhile, there is a decline in humanist values: words such as equality, human rights, fight against discrimination, or gender are qualified as politically correct or ‘wokeism’ by a large swath of media, public intellectuals, and ministers of the current government.”

For some experts and anti-racist groups in France, Macron too is at fault for the current climate, as his administration has adopted legislation and language that echoes some far-right mottos, in hopes of eating into Le Pen’s support.

Racial profiling and police violence targeting people of color, which activists in France have long decried, have also remained a concern under Macron’s presidency, which saw repeated protests in the wake of George Floyd’s death in the US over France’s own cases of police violence.

Also under Macron’s watch, France passed a law against terrorism enshrining the state of emergency started after the 2015 attacks on the Bataclan theater, Paris cafes and Charlie Hebdo newspaper into common law. This extended the government’s right to search people and conduct surveillance, control movement and shut down some schools and religious sites in the name of the fight against extremism.

Human rights watchdogs warned the law was discriminatory. Amnesty International wrote “in some cases Muslims may have been targeted because of their religious practice, considered to be ‘radical,’ by authorities, without substantiating why they constituted a threat for public order or security.”

Then in 2021, the government passed a law targeting what Macron labeled “separatism” by Muslim radicals, extending the state’s oversight over associations and religious sites. The government’s own watchdog argued that the law’s scope is too broad.

Abdourahmane Ridouane has seen this first hand. In February, he was visited by two police officers who handed him a notice of closure for the mosque he manages in the southwestern town of Pessac in Bordeaux wine country. Authorities argued that his mosque’s criticism of “state Islamophobia” encourages and justifies what they called Muslim rebellion and terrorism, and criticized political and anti-Israel, pro-Palestinian posts on their social media page.

“I felt deeply saddened by a process I deemed unworthy of a democratic state,” Ridouane told the AP. He challenged the state’s decision and won on appeal. The appeals court found the closure was a “grave and manifest illegal infringement on religious liberty.” The state took the case to France’s highest court, expected to rule Thursday in the case.

France has also seen the rise of criticism of “Islamo-leftism” and “wokeism” reminiscent of attacks on critical race theory in the US. Macron’s government has commissioned a study into its presence in French universities. 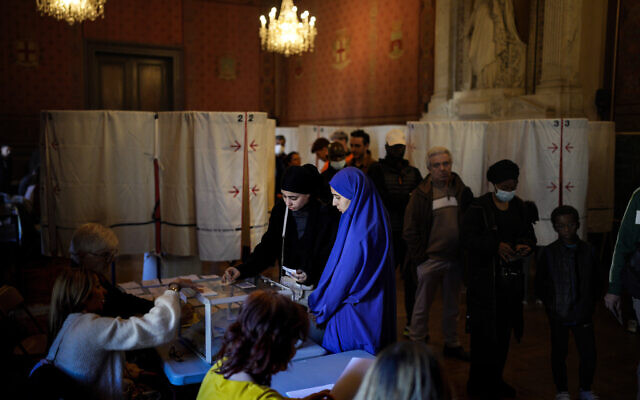 Voters cast their ballots for the first round of the presidential election in Marseille, southern France, on Sunday, April 10, 2022. (AP/Daniel Cole, File)

Yet race or colonial studies research departments don’t exist in French universities, because they are seen as contrary to French universalism. Critics say this doctrine allows authorities to turn a blind eye to deep-seated discrimination, both on the French mainland and in overseas French territories where most voters aren’t white.

“The election comes in this climate, the increasing right-wing and conservative discourse, a retreat into a white, universalist, colorblind discourse blind to all discriminations and systemic racism in French society,” said Nacira Guénif, an anthropology and sociology professor at Paris VIII University focusing on race and gender.

On the left, meanwhile, “denial prevails,” Guénif said, because many left-wing French voters are “profoundly uncomfortable with the question of race because they think that talking about race makes you racist.”

Despite concerns over measures under Macron, the Pessac mosque director is not hesitant as to whom he will vote for in the second round.

“If Le Pen manages to take the levers of power, it will be the worst thing we will have ever seen,” Ridouane said.

Israel is now a far more prominent player on the world stage than its size suggests. As The Times of Israel’s Diplomatic Correspondent, I’m well aware that Israel’s security, strategy and national interests are always scrutinized and have serious implications.

It takes balance, determination, and knowledge to accurately convey Israel’s story, and I come to work every day aiming to do so fully.

Financial support from readers like you allows me to travel to witness both war (I just returned from reporting in Ukraine) and the signing of historic agreements. And it enables The Times of Israel to remain the place readers across the globe turn to for accurate news about Israel’s relationship with the world.

If it’s important to you that independent, fact-based coverage of Israel’s role in the world exists and thrives, I urge you to support our work. Will you join The Times of Israel Community today?

YES, I’LL GIVEAlready a member? Sign in to stop seeing this