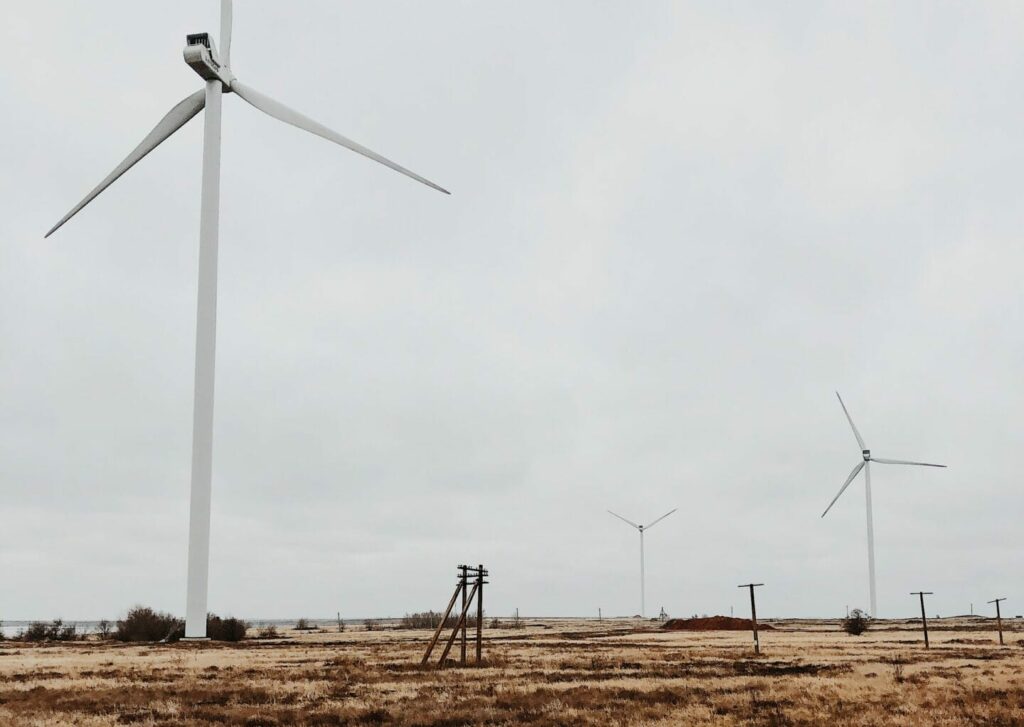 Windmills in Kherson Oblast, Ukraine (Photo by Anastasia on Unsplash)

The conflict between Russia and Ukraine has leveled schools, businesses, hospitals, and homes, causing up to $63 billion in damages to Ukraine’s infrastructure by the end of March, according to estimates by the Kyiv School of Economics. It’s hard to find a sector of society that hasn’t been affected, and Ukraine’s nascent renewable energy sector is no exception. The team I lead at the data and analytics firm Verisk has learned the damage could surpass $1 billion, which would make it the largest renewable energy sector loss event in history.

It’s still early, and even upon the cessation of hostilities, it’ll take some time to figure out the full extent of the damage to the renewable energy sector in Ukraine. Market intelligence so far, though, suggests that losses are accumulating quickly. After the violence ends, the industry will need to take stock, and eventually, to rebuild. And while these expensive losses are likely to catch the insurance industry by surprise, they could also demonstrate the effectiveness of insurance as an economic security measure that helps communities rebuild after disaster.

The state of renewables in Ukraine. The renewable energy sector in Ukraine is still small, but it shows plenty of potential. After all, the country’s stated objective is to get a quarter of its energy mix from renewables by 2035. While the country’s national energy strategy does make a nod to climate change, energy security in the face of nearby physical and military threats is clearly the top priority.

Despite being a transit country for Russian fossil fuels, Ukraine has a fairly diverse energy mix, with 65 percent of its needs met by internal production, as of 2018, with 30 percent coming from coal, 28 percent from natural gas, and 24 percent from nuclear. Renewable energy accounted for only 5 percent of Ukraine’s energy mix in 2018.

But renewables shot up to 12.4 percent of Ukraine’s energy mix by the end of 2020, more than doubling in just two years. Solar makes up the bulk of that, accounting for 78 percent of capacity. Wind is a small but growing sector. Although Ukraine missed its 2020 objective of 2.28 gigawatts from wind, which would have been a 500 percent jump from 2018, the country did get to 1.7 gigawatts last year.

The onset of armed conflict has quickly shown, however, that the optimal areas for wind are in the southern part of the country, which is where the fighting is now centered. Thirty-eight of Ukraine’s windfarms are located between Odesa and Luhansk, with the remaining four out near the border with Poland. That means the vast majority of Ukraine’s wind assets have been exposed to serious risk, and repairs can become very expensive.

The billion-dollar threshold. The few estimates that are coming through the insurance industry reflect early assessments, which means there could be some volatility in forecasts. However, the direction seems clear. Already, the property claim services team at Verisk has learned of more than $750 million in potential insured losses from windfarms in Ukraine, with the potential for at least another $100 million in additional losses. The aggregate renewable energy loss would reach just over $860 million, even without any additional companies coming forward. But with potential losses to solar facilities currently unknown, it’s too soon to tell where the total could end up.

How greed and politics are slowing the switch to renewable energy

In addition to the windfarms, unspecified damage is believed to have occurred to several other power plants, according to the Kyiv School of Economics. Details are thin, but seven power plants, both thermal and hydroelectric facilities, are believed to have been affected. However, initial reports help provide a foundation for the expectation of further insured losses from renewable energy. Moreover, these economic losses, estimated at $101 million, only consist of direct damage to the facilities. That means losses from business interruption—like lost earnings—could more than double that figure.

Business-interruption losses can become more expensive than physical damage, especially when political violence is involved. The periods of asset inactivity due to the conflict in Ukraine are likely to drag on, making an industry-wide loss of over $1 billion for renewable energy a distinct possibility, and the first time that threshold has been hit.

The renewable energy sector has experienced some significant insured losses in other countries. The largest so far was at the Ituango dam, a hydroelectric project in Colombia that suffered serious construction problems; a settlement of the construction dispute fell just shy of $1 billion (at $984 million). As a single loss, Ituango is far larger than each of the individual reported losses from Ukraine’s renewables sector, at least so far.

But there’s a psychological threshold at the “billion” level, be it dollars or anything else. There’s a big difference between “almost a billion” and “over a billion.” Big round numbers are easy to understand – they are effectively reference points in themselves. The first $1 billion renewable energy loss, therefore, will be a meaningful one.

Where does nuclear fit in? There is one more potential source of insured losses for the renewable energy sector, although there’s plenty of debate on whether it is considered renewable: nuclear energy. Since nuclear energy is low-carbon and produces minimal waste, it is often included within the more conventionally categorized renewable sector. Losses from nuclear are more ambiguous than windfarms, but a bit of digging reveals a few important insights. Nuclear facilities in the country are insured by the Ukrainian Nuclear Insurance Pool, so there likely would be insured losses from certain types of damage and restricted operations.

Further reports suggest potential losses include two facilities. Zaporizhzhia, the largest nuclear power plant in Europe by capacity, has seen a significant reduction in production and sustained physical damage, with the Kyiv School of Economics physical damage economic loss estimate exceeding $2.4 billion. The other, Chernobyl, is presumably not included in the Kyiv School of Economics list. The situation at Chernobyl throughout the conflict, though, indicates that some amount of insured loss may be possible. Although not operational since the end of 2000, there are still risks associated with the facility, and they may have been exacerbated during the conflict due to such issues as infrequent staff replacement.

Forecasted insured loss estimates aren’t circulating yet for the Ukrainian nuclear sector, but if history tells us anything, it’s that insured losses to nuclear facilities tend to be costly. The insured loss from the Crystal River nuclear event, which involved damage to a concrete containment wall, reached $850 million, according to PCS internal research. The Three Mile Island accident in 1979 resulted in an insured loss of just over $250 million, not adjusted for inflation.

Again, there isn’t enough information out in the market yet to determine the potential insured losses from the two nuclear facilities in Ukraine, but they could very well push the aggregate insured loss for the renewables sector well above $1 billion. To put that into context, the insurance industry contribution to renewable energy rehabilitation would be roughly the same as US aid sent to Ukraine over the past year.

What comes next? The conflict between Russia and Ukraine has been catastrophic for Ukraine’s economic and energy security, but there will be an opportunity here for the insurance industry to demonstrate how it can help with post-conflict recovery and reconstruction.

Rebuilding Ukraine’s nascent renewable energy sector will likely begin with insurers. When the violence ends, they will need to deploy loss adjusters to affected areas to inspect damage, ascertain lost revenues and earnings, and work through the claims process. Particularly for large commercial losses, like energy facilities, it is a complex and time-consuming process.

Counterintuitively, loss events can support overall industry growth, often by demonstrating that the industry is prepared to respond, as well as the demonstration of how the injection of capital after an event can help a community (or country) return to normal.

The conflict in Ukraine could become the largest aggregate insured loss from political violence since the terror attacks of September 11, 2001, which cost insurers approximately $50 billion (adjusted for inflation). And while the insurance industry contributed heavily to post-event recovery in that case, a more recent and instructive example may be the outbreak of political violence in the Turkish provinces of Diyarbakir and Sirnak in 2016. While the average home value in that region is under $25,000, months of fighting ultimately led to insured losses of $140 million.

After spending time with the local insurance industry in Istanbul, I saw how many approached the loss event. In addition to the normal operation of the industry, in which claims led to repair and reconstruction, the event showed the value of an innovative microinsurance program. As part of a loyalty marketing effort, a telecommunications provider offered terror insurance coverage of ₺500 to customers (around $140 at the time), which led to 500,000 policies in force. While claim rates were not published, the program succeeded in providing fast relief to many families.

According to Verisk’s internal research, there have been more than 40 instances of political violence since 1990 in which post-event insurance support played a part in recovery and reconstruction.

When the fighting in Ukraine comes to an end, the insurance industry’s work will begin, and that will include the review of renewable energy assets damaged during the conflict. Whether the total reaches $1 billion remains to be seen, but it will be costly, even if the losses stay below that psychological threshold. What matters, though, is that the flow of insurance capital will help address the economic component of Ukraine’s energy security strategy. The reconstruction of windfarms will hopefully keep Ukraine on track toward its 2035 renewable energy goals, and its plans for energy security.