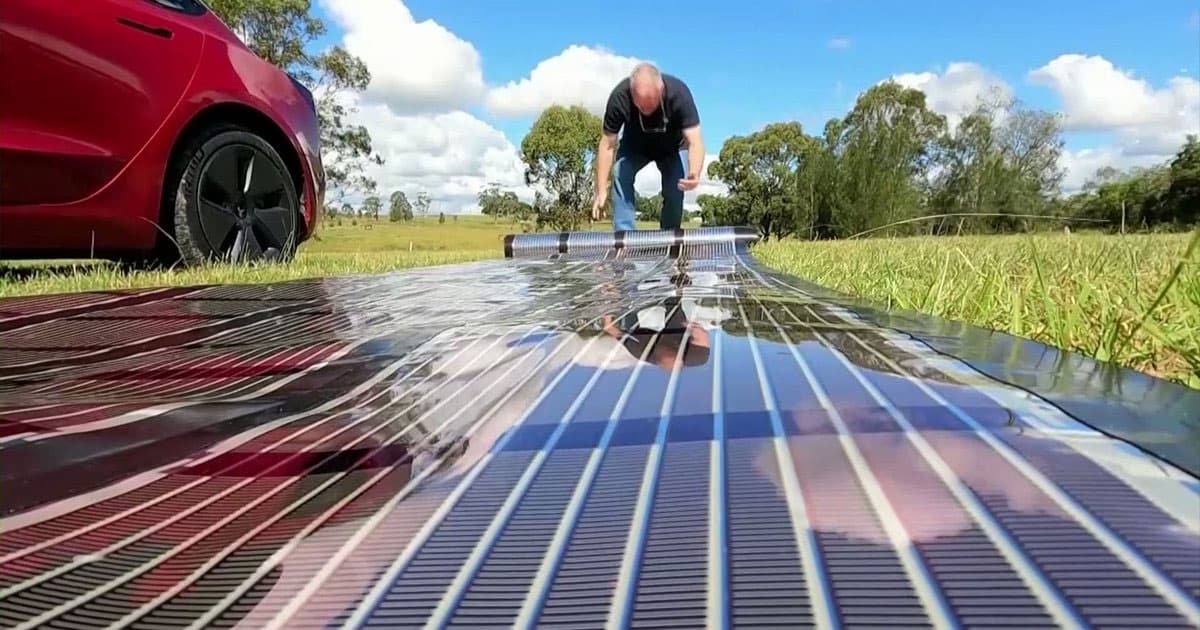 A Tesla Is Driving Around Australia, Completely on Solar Power

A team of scientists are planning to drive a Tesla 9,400 miles around Australia — a journey that’ll be entirely powered by the Sun alone, Reuters reports.

The solar panel technology being used during their trip could make electric cars a lot more viable, especially in remote parts of the world where access to public, grid-connected chargers isn’t always guaranteed.

The team is also hoping to quash any remaining “range anxiety” that may still be putting people off from ditching their gas-guzzling cars — and, perhaps, usher in a greener future while they’re at it.

The team behind the Charge Around Australia project are hoping to soak up the Sun’s rays using 18 specially printed plastic solar panels, 59 feet long each, which will be rolled out beside the Tesla whenever it needs a charge.

“This is actually an ideal test bed to give us information about how we would go about using and powering technology in other remote locations, for example, in space,” inventor of the plastic solar panels Paul Dastoor told Reuters.

These rolled up sheets are made out of laminated layers of PET plastic, the same plastic used to make water bottles, and the folks behind the project say it can be manufactured at extremely low costs at less than $10 a square meter.

Charge Around Australia founder Stuart McBaine will kick off the two month journey in September, carrying the solar rolls inside a suitcase that weighs almost 100 pounds.

It won’t be nearly as easy as rolling up to a Supercharger. McBaine will only be able to cover two hours of driving a day, while spending six hours charging the panels, according to Insider.

Dastoor hopes his panels could allow more Australians to drive electric vehicles in remote parts of the country, especially given the extremely limited number of public chargers in the country — all in the hopes of reducing our carbon footprint.

Copyright ©, Camden Media Inc All Rights Reserved. See our User Agreement, Privacy Policy and Data Use Policy. The material on this site may not be reproduced, distributed, transmitted, cached or otherwise used, except with prior written permission of Futurism. Fonts by Typekit and Monotype.