Russian military vehicles move on a highway in an area controlled by Russian-backed separatist forces near Mariupol, Ukraine, on April 18, 2022. (AP Photo/Alexei Alexandrov)

MOSCOW — The Russian army will try to take full control over eastern and southern Ukraine, a top Russian general was quoted as saying Friday, a day after Moscow announced the “liberation” of Mariupol.

“Since the start of the second phase of the special operation… one of the tasks of the Russian army is to establish full control over the Donbas and southern Ukraine,” Major General Rustam Minnekaev was cited as saying by Russian news agencies.

“This will provide a land corridor to Crimea,” he added, referring to the peninsula Russia annexed from Ukraine in 2014.

Minnekaev’s comments were the most detailed description yet of Russia’s goals in the second phase of its operation, which began after its troops pulled back from the Ukrainian capital Kyiv.

“Control over the south of Ukraine is another way out to Transnistria, where there are cases of Russian-speaking people being oppressed,” Minnekaev said.

Transnistria is a small breakaway region in the former Soviet republic of Moldova, where pro-Russia separatists have been armed and backed by Moscow. 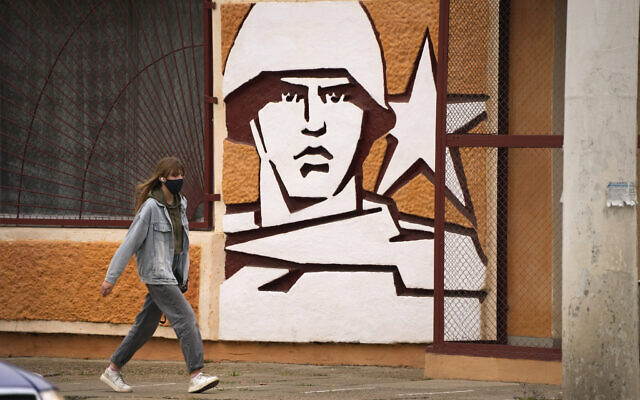 A woman walks past the Operational Group of Russian Forces headquarters in Tiraspol, the capital of the breakaway region of Transnistria, a disputed territory unrecognized by the international community, in Moldova, November 1, 2021. (AP Photo/Dmitri Lovetsky, File)

Moscow recognized the independence of the separatist Donetsk and Luhansk People’s Republics in Ukraine’s Donbas shortly before launching a military campaign on February 24 with the stated aim of protecting the Russian-speaking population there.

On Thursday, Russia announced the “liberation” of Mariupol in eastern Ukraine after besieging the strategic port city on the shores of the Sea of Azov for nearly two months.