In this image published April 19, 2022, a Ukrainian bomb sniffing dog, Patron, is seen standing on top of a shell in Ukraine. (State Emergency Service of Ukraine)

A two-year-old Jack Russell Terrier named Patron, who works to sniff out dangerous explosives in Ukraine, has become an internet celebrity in the war-torn country and around the world.

Patron — Ukrainian for “bullet cartridge” — has helped clear some 90 explosive devices with the Chernihiv branch of the State Emergency Service of Ukraine (SES), officials said.

The northern Ukrainian city of Chernihiv was under siege by Russian forces for over a month since the Russian invasion of Ukraine started on February 24. The Russian army pummeled the city’s residents with air raids and strikes, before withdrawing in early April.

Videos shared by authorities showed the small dog on duty, wearing a protective vest and walking around with his snout to the dirt, seeking out mines and shells left behind by the invading Russian army.

“Thank you, my friend, for your tireless work!” the SES said in a recent social media post.

Patron has become a hero to Ukrainians and many others around the world, with several sharing fan art and memes of the small Jack Russell Terrier.

The paintings, drawings, and cartoons depict a heroic Patron in his trademark vest.

“It motivates not to give up no matter how hard it is, to keep the bar high and to fight with new strength, knowing how many people are still waiting for help and how many people believe in us,” the service said in a post that included a compilation of fan art.

While Ukraine has several bomb-sniffing dogs, the SES has described Patron as the mascot of its Chernihiv sapper squad.

“Our Patron keeps his paws busy and is thankful to every one of you,” the service said in a post last month. “Great heroes come in all sizes. Keep true to yourselves, trust in our defenders, in our victory,” it added.

Ukraine’s Center for Strategic Communications said last month that “one day, Patron’s story will be turned into a film, but for now, he is faithfully performing his professional duties.” 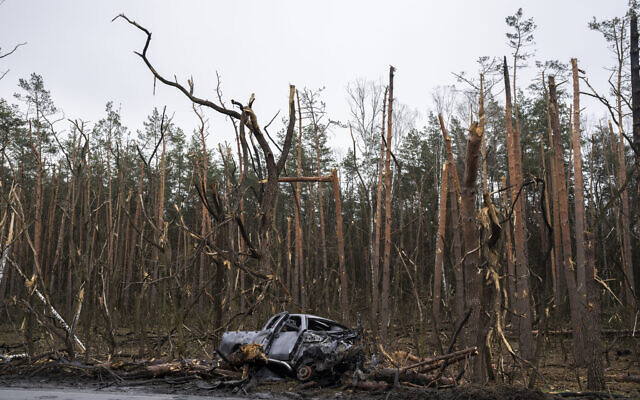 The gutted remains of a car in front of damaged trees following a battle between Russia and Ukrainian forces on the outskirts of Chernihiv, Ukraine, on Friday, April 22, 2022. (AP/Petros Giannakouris)

The United Nations’ human rights office on Friday pointed to what it said is growing evidence of war crimes since the Russian invasion of Ukraine, declaring that humanitarian law appears to have been “tossed aside.”

Michelle Bachelet, the UN high commissioner for human rights, said that “our work to date has detailed a horror story of violations perpetrated against civilians.”

Her office’s mission in Ukraine so far has verified 5,264 civilian casualties, including 2,345 deaths, since the war began on February 24. It said that 92.3% of those were recorded in Ukrainian government-controlled territory. The office uses strict methodology and has long acknowledged that its confirmed figures are far short of the real numbers.

On April 9, UN human rights officers visiting Bucha documented the unlawful killing, including by summary execution, of some 50 civilians, her office said.

The UN mission has received more than 300 allegations of killings of civilians in previously occupied towns in the Kyiv, Chernihiv, Kharkiv and Sumy regions.

AP contributed to this report.