Escaping arrest and even torture, dissidents face further hardship in Israel, with their requests neither approved nor denied for years, leaving them in limbo in a foreign country

Illustrative: A Russian woman seeking asylum in the United States recalls her trip from Russia to the Mexican border, standing near the San Ysidro Port of Entry into the United States, in Tijuana, Mexico, on March 17, 2022. (AP Photo/Gregory Bull)

Thousands of asylum seekers from Russia and Belarus have sought refuge in Israel before and after the Russian invasion of Ukraine but the state has so far adopted a strategy that leaves them in limbo, lacking any legal rights.

Asylum seekers from Russia and Belarus include anti-regime protesters who fear arrest and torture if forced to return to their homelands, where anti-protest measures have increased since the war in Ukraine was launched on February 24.

One of those asylum seekers is Dmitry (alias), who escaped Belarus after participating in protests against Belarusian President Alexander Lukashenko and entered Israel with a tourist visa about a year ago, leaving his wife and two children behind and hoping to reunite with them in Israel.

“After the war in Ukraine began, in which Belarus is aiding Russia, the regime became even more violent toward protesters and started threatening their families,” an associate of Dmitry told Zman Yisrael, The Times of Israel’s Hebrew-language sister site.

Arriving in Israel shortly after Dmitry, his wife and two children were refused asylum by the state and detained at Ben Gurion Airport. Dmitry appealed his family’s detention and rented a small apartment for them, thinking they would soon be reunited.

But his appeal was rejected and his family deported. Alone again in a country that doesn’t seem to want him, Dmitry will likely leave Israel soon and seek refuge for his family elsewhere. 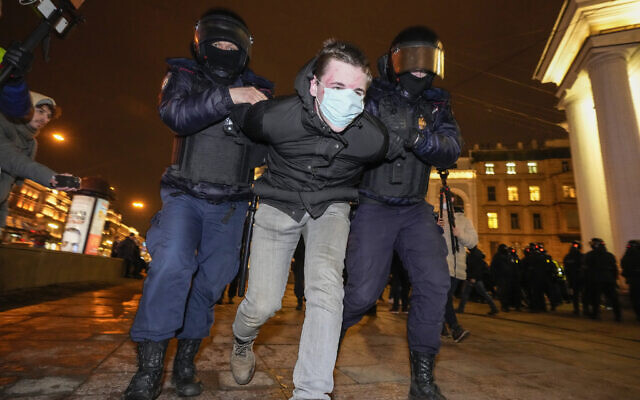 Police detain a demonstrator during a protest against Russia’s attack on Ukraine in St. Petersburg, Russia, on March 2, 2022. (AP Photo/Dmitri Lovetsky)

“The State of Israel has signed the international Convention Relating to the Status of Refugees but ignores it,” said attorney Yeshayahu Rotenstreich, who represents immigrants, refugees and asylum seekers from post-Soviet states.

“Russia and Belarus are controlled by murderers and mobsters in suits. There are thousands of people who oppose the political systems there and have participated in anti-regime protests before escaping to Israel to seek asylum. Most have been refused and deported. Unfortunately, there are no requests that are approved,” he said.

Rotenstreich said the state has employed an effective strategy for ignoring asylum seekers, letting them wait for their request to be examined — a process that can take up to five years — before eventually rejecting it.

“Unfortunately, the state’s strategy is an effective one. They consistently reject requests, again and again,” he said, noting that when asylum seekers go to court, the state asks the court not to intervene in its policies on the matter.

“The court cannot force the executive branch to adopt a different policy if the law allows it and it is upheld consistently, even if the policy is heartless, senseless and distorted,” Rotenstreich said.

Court discussions regarding requests by asylum seekers are held behind closed doors, so he was unable to provide specific details. 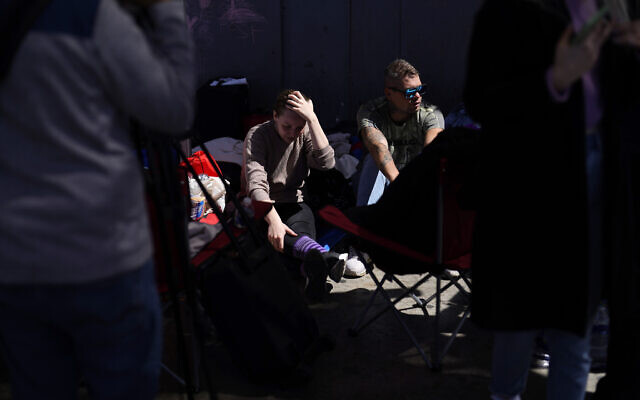 Illustrative: A couple from Russia seeking asylum waits near the San Ysidro Port of Entry into the United States, in Tijuana, Mexico, on Thursday, March 17, 2022. (AP Photo/Gregory Bull)

Asked to speculate the reasons behind the policy, Rotenstreich said: “I wish I could see some logic in it. There is an irrational fear that the refugees will fill working positions [at the expense of Israelis], and also the other way around — that they won’t work and become a burden on the state budget. There are also deep motivations of Jewish identity that the refugees seemingly threaten, although in light of the ratio of refugees to citizens, that is complete nonsense.”

According to data released by Israel’s Population and Immigration Authority, some 100 asylum requests were submitted by Russian nationals and 21 by Belarusians since February 28.

Since 2011, some 8,720 requests for asylum were submitted by Russians and some 1,394 by Belarusians, data showed. According to Rotenstreich, none of the requests were ever approved and the vast majority were rejected, usually after a four-to five-year-long wait.

“All [asylum] requests were submitted to the RSD unit that deals with asylum requests and every request is closely examined,” the Population and Immigration Authority said in response, refusing to comment directly on Rotenstreich’s comments.

Tobias Siegal contributed to this report.