Oliver Stone: ‘The Putin I knew was rational, calm, always acting in the best interest of the Russian people’ 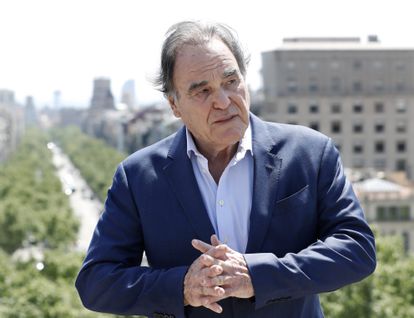 Oliver Stone in Barcelona where he presented ‘JFK Revisited: Through the Looking Glass’ at the BCN Film FestAndreu Dalmau (EFE)

Oliver Stone, the self-described “old left-wing filmmaker” who made unforgettable movies like Platoon, Born on the Fourth of July and JFK, on Tuesday came out in defense of Russian President Vladimir Putin during the presentation of a new documentary about the assassination of John F. Kennedy.

Asked by this newspaper about his views on the Russian leader, Stone said that one cannot separate the man from the state. “It’s been three years since I last saw him, but the man I knew had nothing to do with the irresponsibleand murderous madman that the media are now making him out to be, comparing him with Hitler and Stalin,” said Stone, who was in Barcelona for the Spanish premiere of JFK Revisited: Through the Looking Glass as part of the 6th BCN Film Fest.

“The Putin I knew was rational, calm, always acting in the best interest of the Russian people, a true son of Russia, a patriot, which does not imply a nationalist,” said the 75-year-old director, whose earlier four-hour TV series The Putin Interviews, based on talks held with the Russian leader between 2015 and 2017, has been described by critics as too soft on Putin.

Stone described a Russia that has been “reduced and mutilated” following the collapse of the Soviet Union, with large numbers of Russians living in other territories. According to him, the US had a long-term plan to place a pro-Western, anti-Russian government in Ukraine “when Ukraine had always been neutral, with democratically elected governments.” The goal of this plan, said Stone, was to turn Ukraine into a useful antagonist of Russia, something which he said has been achieved with Ukrainian President Volodymir Zelenskiy.

The movie director suggested that the ultimate goal may have been to destabilize Russia and change the regime there, “to take Putin out and put in another [Boris] Yeltsin.” Stone, who noted that there were Ukrainians who fought for Hitler during World War II, also described the US as “an attack dog” that will not stop at Russia and could later target China. He deplored the way that Russia is being depicted “as the bad guy” and the US as “the good guy.”

After discussing his new documentary on the JFK assassination, Stone said that the world needs more leaders like Kennedy, recalling the former president’s speech about a “Pax Americana” that should not be achieved through supremacy or weapons.