A spokeswoman for Russia’s foreign ministry on Wednesday claimed Israeli mercenaries were fighting alongside the far-right Azov Regiment in Ukraine, further fueling tensions with Israel after Russia suggested Adolf Hitler had “Jewish blood.”

Azov rose to prominence in 2014, when its far-right activists took up arms to fight pro-Russian separatists in Ukraine’s eastern Donbas region but have since fallen under the command of Ukraine’s military.

They have been fighting alongside the Ukrainian army against Russian troops, who on February 24 launched a military campaign in the pro-Western country.

Its members are part of the Ukrainian resistance in the port city of Mariupol, holed up inside the Azovstal steel plant against which Russian forces launched a major assault on Tuesday.

Zakharova appeared to be referring to Ukrainian-born Israelis and native Israelis who traveled to Ukraine to join volunteer units after the Russian invasion, though there have not been reports of them fighting alongside Azov.

There are believed to be hundreds of Israeli volunteers in Ukraine, but there are no exact figures. 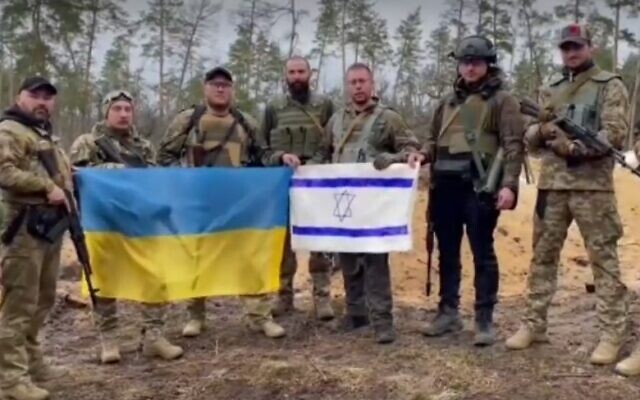 By suggesting that Israelis are fighting alongside Azov — viewed by Russia as “fascists” and “Nazis” — Moscow is compounding tensions that started after Russian Foreign Minister Sergei Lavrov said Sunday that Hitler had “Jewish blood.”

His remarks sparked outrage in Israel, which called the statement “unforgivable and outrageous” and a “terrible historical error.”

Speaking Tuesday with The Times of Israel, a senior adviser to Zelensky said Lavrov’s comments border on Holocaust denial and prove Moscow is a threat to Jews everywhere. He also predicted Israel would move closer to Ukraine, citing Lavrov’s remarks and war crimes allegedly committed by Russian forces.

Israel has attempted to strike a balance between support for Ukraine and preserving open ties with Russia, to Kyiv’s dismay, though it has begun to speak out more stridently against Moscow and has agreed to begin sending helmets and flak jackets, rather than purely humanitarian aid.