Drugs, prostitution and extortion: The Longford criminals holding a town to ransom

Crime has blighted the area for the last four years.

LONGFORD IS A town of approximately 12,000 people. The vast majority wish to go about their normal lives with many running businesses on the main street.

However, there is a cohort of people involved in the most serious of crimes: drug dealing, prostitution, extortion, money laundering and loan sharking, who are using Longford town as their own personal criminal base.

According to local reps, there are around 14 different feuds involving seven families in the town and the people involved are tarring Longford with the reputation as an area rife with antisocial and violent behaviour.

In the last two weeks houses have been shot at, people have been assaulted and threats continue to be made against people on social media.

The crime problem in Longford has become so bad that local representatives as well as business owners signed an open letter to Minister for Justice Helen McEntee and Garda Commissioner Drew Harris.

In it, they pleaded for more resources to be given to the Longford district to tackle criminality in the area.

“The general public are appalled at these crimes, often committed in public spaces and heralded on social media as some perverted badge of honour,” the letter reads.

“There is no doubt that due to these public crimes, many people are in fear and are avoiding Longford to the detriment of local economic activity.”

The Journal visited Longford town this week and spoke to politicians, business owners and members of the public about the ongoing criminality in the area.

The message from each of these groups was clear: they are fed up with what is happening.

Independent councillor Gerry Warnock explained that gardaí can only do so much in the fight against these gangs. He urged the judiciary to be more strict when it comes to giving bail and sentencing people of violent crime.

“I think everyone is just fed up with it now. Longford is a town of about 12,000 people if you include the environs,” he said.

“People want to go about their days, go to work, have a coffee in a café or whatever. The last thing they need to be worrying about is if there’s someone around the corner who is about to cause trouble.

“Now, the violence has so far been kept between these groups who are fighting each other but it only takes one incident to blow this thing open. It all comes down to the courts.

“The Gardaí can only do so much. They are arresting these lads all the time – it’s not their fault that the judge is allowing them out on bail and then they’re back doing what they were doing in the first place. You have to get these people off the streets and show them that there are proper consequences, not just suspended sentences.”

Fianna Fáil councillor Séamus Butler has long been an outspoken member of the community who has been rallying against criminal gangs. 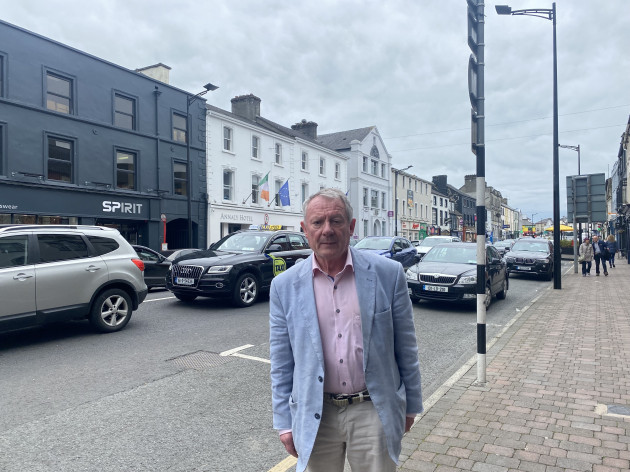 He has long been following the exploits of the criminal gangs in the area, and says that he has received threats to his personal safety for calling out criminality.

“I have children and grandchildren. I can’t look them in the eye and say I didn’t try to stop this,” he says.

“This is not anti-social behaviour, this is serious criminality on a high scale. These are people who think they are above the law. They are out on bail more often than not.

“We are sick of saying to people that these people need to be put away. There is a huge disregard for everyone else but themselves. Longofrd now has this reputation as a crime hotspot because of a small number of people and that’s not fair, it’s not a real reflection on the town whatsoever.”

It is not just local politicians who are exhausted by the ongoing violence around Longford. Local people going about their day when we visited described how the roaming gangs of criminals are deterring people from coming into the town itself.

Bernie Harney has lived in Longford town her entire life. While she admits there has always been “a scrape or two” happening around the town, what has happened over the last three to four years represents a new departure.

“I would have come down to go for a drink in the evening but it was getting a bit rougher. I hate letting them win and I know it’s not everywhere but I just don’t want the hassle of it all,” she said.

As Bernie explained why she has been shunning the town after dark, one business owner (who asked not to be named) described what she has to put up with “on a weekly basis”.

“We have had people assaulted here. I’ve seen people with knives and hammers and screwdrivers,” she says.

“We are just trying to make a bit of money to put food on the table. I nearly have every garda’s number at this rate. They can only do so much. They can’t be here all the time.”

But resourcing of gardaí is a big issue, according to the local reps. Councillor Séamus Butler wants a continuous garda presence in the town. He believes this might act as a deterrent to the warring factions within his town.

“If they see a garda, they’re not going to jump out of the car and try to attack people, which is what is happening now. That’s just not going to happen. It’s a resourcing issue – that’s what it boils down to. You need to have enough people to make locals feel safe. A very small number of people in this town are giving it a bad name,” he said.

“This has been going on far too long and it needs to be sorted.”

Right now, gardaí suspect they know who the troublemakers are, where they socialise and who they associate with.

However, the work of An Garda Síochána stops once an accused person stands before a judge.

“No bail or suspended sentences, it’s up to the judiciary now to fix this,” Butler added.