Man jailed for attacking elderly neighbour during burglary while on bail

Alan Downey has 40 previous convictions, including convictions for assault causing harm, theft and possession of knives. 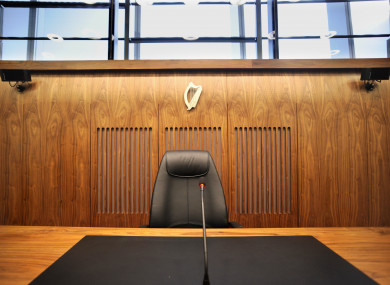 A MAN WHO attacked his 73-year old next-door neighbour during a burglary while on bail for a series of failed robberies has been sentenced to seven and half years.

Alan Downey (40) carried out the “shameful, horrible, cowardly offence” along with another man, gaining entry to the house after the victim recognised him.

Dublin Circuit Criminal Court heard that Downey was on bail for three attempted robberies at the time of the offence.

Downey of Colepark Road, Ballyfermot, pleaded guilty to aggravated burglary on his own road on 20 November, 2020. He has 40 previous convictions, including convictions for assault causing harm, theft and possession of knives.

She suspended the final 22 months of the sentence on strict conditions including that Downey engage with the Probation Service for 18 months and keep the peace and be of good behaviour for two years.

Judge Greally accepted that Downey was now motivated to address his drug difficulties, having positively engaged with drug rehabilitation in the past.

She accepted that he has “repeatedly” offered sincere apologies for his actions, came from a respectable background and continues to enjoy family support.

She acknowledged his poor mental health and a number of “favourable” reports before the court.

Garda Erica Delaney told Siobhán Ní Chualacháin BL, prosecuting, that on the night in question, a then 73-year old man was asleep in his home where he lived alone and had lived for his entire life.

Garda Delaney said the man was woken by knocking on his front door and, recognising the accused man as his next-door neighbour, opened the door allowing Downey and another man to push their way into the house.

The two men demanded money and said they were looking for €6,000. Downey was armed with a screwdriver, while the other man had a knife.

While the men ransacked the house looking for money, the victim was dragged around by his hair and was afraid the men would kill him. He later told his sister that they had broken his walking stick over his back.

The victim rang his sister after the men left, terrified that they would come back. His sister travelled  to the house and saw Downey outside.

She found the victim inside the house retching, vomiting and hyperventilating. She was able to tell that money she had given her brother for his shopping had been taken, as well as a couple of ornaments.

Downey was arrested by gardaí, but engaged in a “dirty protest” in the station just prior to gardaí interviewing him by smearing himself with faeces.

In interview with gardaí following a shower, Downey asked if the victim was alright and said he would apologise to him if he was there now. When told the victim was in hospital and was “very very scared”, the accused replied he knew how that felt.

Downey told gardaí drink and drugs had him “all messed up”, but admitted his participation in the burglary. He said he did not know he had a weapon, did not know why he had brought it and would not have used it.

Garda Delaney confirmed that Downey was on bail for three attempted robberies committed in April and May of 2020 at the time of this offence.

The garda agreed with Dean Kelly SC, defending, that this was a “shameful, horrible, cowardly offence” which requires a custodial sentence. She agreed that despite the seriousness of the offence, there was some good to Downey.

She agreed with counsel that his client presents as a “reasonably pathetic” individual, saying her impression was that he attracts those who might use people for their own ends. She agreed Downey is genuinely shameful and disgusted with what he has done.

Kelly told the court that this was an awful offence that offended against a fundamental sense of decency.

Counsel said his client told him that towards the end of 2019, a childhood friend came back into his life who reintroduced him to drugs, eventually leading to his addiction to crack cocaine.

Kelly asked the court to consider factors which demonstrate his client is a person very far from his behaviour in November 2020 and is not beyond redemption, including his psychological vulnerabilities, his genuine shame, his once having been essentially drug free for over a decade and his strong family support.