Vitaliy Barabash says in Facebook video that there are other Jewish soldiers in the Azovstal complex; Ukrainian sources put the number at over 20

A Jewish Ukrainian soldier in the besieged Azovstal plant in Mariupol called on Israel on Wednesday night to intervene to save the garrison.

In a Facebook video posted by Jewish Kyiv-based entrepreneur and activist Ilgam Gasanov, Vitaliy Barabash said in Ukrainian, “It’s hard for me to speak, so my speech for me will be said by my brother, on behalf of all Ukrainian Jews who are together with me here.”

Barabash, also known as Benya, held a Ukrainian flag up to the camera as his friend read his statement, a Star of David tattoo clearly visible on Barabash’s hand.

Sources close to the Ukrainian government told The Times of Israel that there are over 20 Jewish soldiers among the Ukrainian forces in Mariupol.

The massive Azovstal steel complex is the last bastion of Ukrainian resistance in Mariupol. The plant, with its network of tunnels and bunkers, has sheltered hundreds of Ukrainian troops and civilians during a weeks-long siege. Scores of civilians were evacuated in recent days, but Ukrainian officials said some may still be trapped there.

Earlier this month in a call with the Kremlin, Bennett requested that Russian President Vladimir Putin “examine humanitarian options” for evacuating Mariupol.

The Azov Regiment, one of the units defending the plant, published photos on its Telegram channel on Wednesday showing wounded soldiers in squalid conditions, many missing limbs.

“Ukraine has never turned its back on Jews, so we believe Israel may not turn its back on the Ukrainian people either, but stand side-by-side against Russian invaders who brought a new tragedy,” read Barabash’s statement.

“Now we, being here, need Israel’s help in withdrawing the entire military garrison of Mariupol and call for rescue.”

Gasanov’s Facebook post tagged prominent Kyiv rabbis Moshe Azman and Ariel Markovitch, both of whom belong to the Chabad-Lubavitch movement. He included a Hebrew-language translation of the Ukrainian statement in the comments.

Gasanov told The Times of Israel that he has never met Barabash in person, and is doing what he can to help the besieged Azovstal garrison after his friends’ wives reached out to him.

“I know many who Jews who are currently at war, and not only in Mariupol,” he said.

A Ukrainian commander in Azovstal appealed directly to Elon Musk on Wednesday, asking the world’s richest man to intervene on behalf of those trapped by Russian forces in the southern city.

Serhiy Volyna, commander of the 36th Separate Marine Brigade, said he created a Twitter account for the sole purpose of reaching out to Musk.

“People say you come from another planet to teach people to believe in the impossible,” Volyna tweeted at Musk.

“Our planets are next to each other, as I live where it is nearly impossible to survive. Help us get out of Azovstal to a mediating country. If not you, then who?”

Ukraine’s Deputy Prime Minister Iryna Vereshchuk said Tuesday that more than 1,000 soldiers remain in the factory. “Hundreds are injured,” she told AFP. “There are people with serious injuries who require urgent evacuation. The situation is deteriorating every day.” 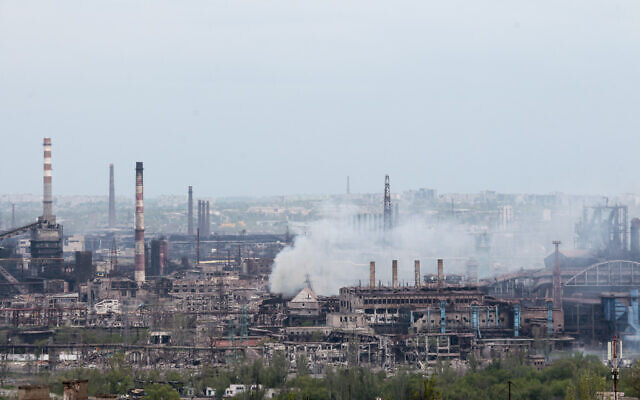 Smoke rises from the Metallurgical Combine Azovstal in Mariupol, in territory under the government of the Donetsk People’s Republic, eastern in Mariupol, Ukraine, Thursday, May 5, 2022. (AP Photo)

Vereshchuk said Ukraine was calling on all international organizations to put pressure on Russia to allow the evacuation of the seriously wounded, military medical personnel and other “noncombatants, according to the Geneva Convention.”

Vereshchuk also said she had received assurances that “Turkey is ready” to help facilitate evacuations by sea from Azovstal, which she said could take around a week, given the number of people remaining in the plant.

“There must be agreements and guarantees that Russia does not start shooting,” she said.

“We need ironclad guarantees in writing. That’s what we’re working to get now.”

Writing on social media on Sunday, presidential aide Mykhaylo Podolyak said Kyiv “won’t stop until we evacuate all our people” from Azovstal.

AFP contributed to this report.