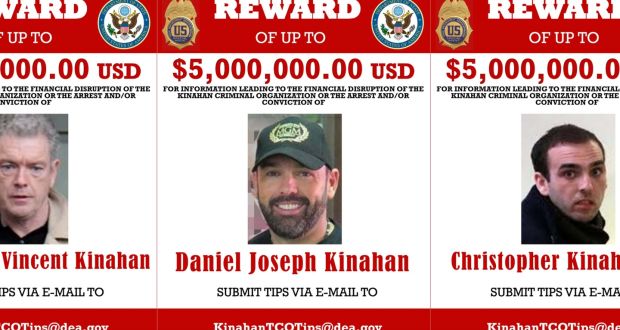 US ‘Wanted’ posters of the Kinahans – Christy, Daniel and Christopher jnr

Violence associated with the Kinahan crime cartel has been documented in a number of EU member states, leading to murders in four countries, an expansive new Europol report on the drugs trade has said.

The Dubai-based gang is among a number of organised crime outfits identified as being complicit in the international supply, distribution and sale of drugs.

“Violence and homicides in several EU member states have also been connected to the notorious Kinahan clan from Dublin, Ireland, ” said the 2022 EU Drugs Market Analysis, which was jointly published on Friday by Europol and the European Monitoring Centre for Drugs and Drug Addiction (EMCDDA).

“Conflict between the Kinahans and rival groups has led to the murder of at least 20 people in Belgium, Ireland, the Netherlands and Spain. The trial of some Kinahan clan members revealed that specialised crime cells were established in order to kill rivals,” it said.

Last month, the UAE moved to freeze the gang’s assets following US intervention including sanctions and the offer of $5 million rewards for information on its operations.

Friday’s report, focusing initially on the trade in cocaine and methamphetamine, also identified Ireland as one of a number of countries whose citizens were involved in homicides or attempted murders in Spain’s Costa del Sol.

Although retail sales of drugs were affected by Covid-19, wholesale activity continued unabated.

Many networks have been involved for at least a decade, but the report notes “new players” from countries including Ireland “on the lookout for a bigger share of the cocaine market”.

Cocaine is the second most commonly consumed drug in the EU after cannabis, with a market retail value of about €10.5 billion. An estimated 3.5 million Europeans admit using it in the past year.

Against that background, the report points to an expanding market, driven by unprecedented levels of trafficking and record seizures in Europe – 214.6 tonnes in 2020, a 6 per cent increase on 2019. In another marked shift, production is increasingly taking place inside the continent.

There are also warning signs around crack cocaine, with evidence suggesting its use is on the rise. Ireland is listed alongside Belgium and Portugal as countries showing a “notable increase” in crack use.

“Low-threshold [treatment] services in Brussels, Lisbon and some areas of Ireland and Italy reported a significant increase in the number of crack users among their clients in 2020.”

Methods of drugs purchases are also examined. Ireland and Sweden stood out for their use of social media (13 per cent respondents, according to the annual European Web Survey on Drugs). Use of the dark net ranged from 20 per cent in Sweden and Finland to 2 per cent in Ireland and several other countries.

A separate report on Friday examined the use of methamphetamine which is also spreading. Now the most widely consumed synthetic stimulant drug in the world, the research notes it may have become more popular among some people in Ireland who inject drugs.

Across Europe between 2010 and 2020, the number of meth seizures more than doubled, while the quantities seized increased by 477 per cent to 2.2 tonnes in 2020.

“Our new analyses show that we are now facing a growing threat from a more diverse and dynamic drug market, that is driven by closer collaboration between European and international criminal organisations,” said EMCDDA director Alexis Goosdeel. “This has resulted in record levels of drug availability, rising violence and corruption, and greater health problems.”