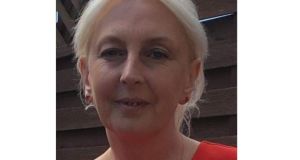 Gardaí suspect Lia Thompson may have struck up some new relationships over the last six to 12 months and that these may hold the key to her murder. Photograph: Garda/PA WirePrevious ImageNext Image

Gardaí are investigating people who may have visited the home of Lisa Thompson in the days leading up to her murder.

Ms Thompson was found dead at her home on Sandyhill Gardens, Ballymun, north Dublin, on Tuesday afternoon, and it is believed the 52-year-old’s remains had lain in the terraced property undiscovered for a number of days.

No suspects have been nominated so far and gardaí are still unaware of any solid motive for her murder. A garda said on Friday the investigation is casting a “very wide net and looking down all possible avenues”.

Part of the investigation is focusing on a small number of people believed to have visited Ms Thompson’s home in the immediate period before she was last seen last Saturday. In particular they are eager to speak to two males who were seen in the area.

Gardaí suspect Ms Thompson may have struck up some new relationships over the last six to 12 months and that these may hold the key to her murder.

The mother of two died as a result of a violent knife attack in her home. A postmortem determined that cause of death was trauma caused by up to 12 knife wounds.

There were no signs of break-in at the home and it is believed she may have let her killer in the house.

Following the discovery of Ms Thompson’s body, Supt Darren McCarthy of Ballymun Garda station said gardaí were unaware of any threats made against her or any reason why she would fear for her safety and that gardaí had “an open mind as to the motive of this attack at this time

Gardaí continue to appeal for witnesses to come forward, including anyone, including motorists and others who may have footage from around the Sandyhill area of Ballymun since last Saturday.