Trump’s ‘Big Lie’ about Black people jeopardizes democracy for all 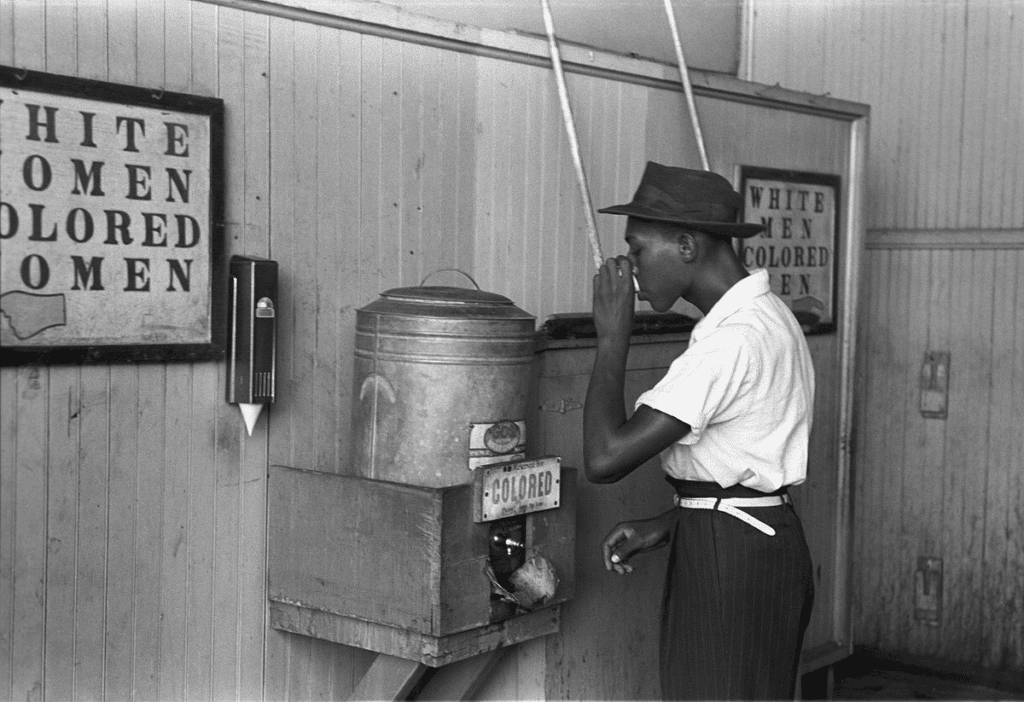 Disinformation about Blacks was used to justify the legally enforced segregation of the Jim Crow era in the United States. Credit: Russell Lee via Wikimedia Commons.

In the 19th and 20th century, white racists spread disinformation contending that Blacks were ignorant and had no value to society beyond slavery. Disinformation about Blacks, propagated in newspapers and in other venues, helped justify legal segregation of schools, restaurants, park benches, drinking fountains, swimming pools, hotels, and other public spaces. Even libraries were segregated; advanced reading material was available only to whites. Segregation was but just one of the more tangible pernicious effects of disinformation.

Since then, racists in the United States—from dog whistlers to outright white nationalists—and adversarial countries like Russia have been able to exploit the fissures in US society that racial disinformation helped crack open, creating a vicious spiral, in which racist disinformation helps to beget real-world racism, which then creates ripe targets for more disinformation that exploits racial division. It’s a process that has upended COVID-19 vaccination drives and driven election conspiracy theories. Racial disinformation has helped the United States to become a place where few have trust in government, and many fear that its ability to function as a democratic society is on perilous footing.

Disinformation is like the iceberg floating in deep waters, where only a small amount of ice is visible on the sea surface. The disinformation undergirding former President Donald Trump’s so-called “Big Lie”—the false claim that he won the 2020 election and that massive voter fraud put President Joe Biden over the top—often dealt with Black people. After all, in Trump’s telling, it was vote rigging in urban centers, where many Blacks live, that helped Biden win. On the surface, these false election claims have driven a slew of state-level laws restricting voting. But the broader impact of the disinformation is harder to see, just as the larger and most dangerous part of the iceberg is hidden beneath the water.

What did it take for Republicans to win changes in voting rights policies? According to the nonprofit Brennan Center for Justice, a nonpartisan law and policy institute, “mobilization around the Big Lie” coincided with 19 states passing 34 new laws to restrict access to the polls. Justifying the laws, which will disproportionately affect Blacks, required a massive effort on the part of Trump, Republicans, and right-wing groups to spread lies about corruption and voter fraud in urban precincts.

The 17th Century English philosopher John Locke argued in the The Social Contract that government only works with public trust. People agree to be governed by the majority if the natural rights of each citizen are protected. But disinformation aimed at disenfranchising Blacks through racist voting laws diminishes trust not just among Blacks, but also in the broader society.

The right-wing also worked quickly to exploit the Black Lives Matter movement that grew explosively after George Floyd’s murder in May 2020. Relying on disinformation narratives, this effort sought to reduce support for the movement by portraying it as radical and violence-prone. Initially much of the country backed the movement to seek justice for Floyd and others, and had it not been for whites protesting with Blacks during the marches against police violence, the police officer who killed Floyd by kneeling on his neck for more than nine minutes, Derek Chauvin, might not have been convicted and given a 22 and 1/2-year prison sentence.

But support began to waver soon in the face of disinformation about the movement.

In the immediate sense, the disinformation about Black Lives Matter provided Trump with a “law and order” campaign platform, but again, it arguably came with a broader cost. With his violent rhetoric, Trump clearly ripped further at the seams stitching the country’s demographic and political groups together. Between June 2020 to November 2021, Republican support for the Black Lives Matter movement dropped from 53 percent to 24 percent, as overall support for the movement dropped.

A 2019 Pew study shows that 75 percent of Americans think public trust in government is declining. Moreover, 64 percent believe that the decline in trust makes it harder to solve America’s problems. There’s a strong chance those horrible numbers haven’t changed much, or perhaps have even worsened, as right wingers mobilize against books, social emotional learning, and Walt Disney, all because they teach children and the public about America’s undeniably racist past. Racist disinformation may get some books banned from local libraries, but its impact on societal trust is likely to be broader, if harder to pin down.

Black people aren’t just pawns in disinformation narratives like the Big Lie; they’re direct targets. Disinformation campaigns, for example, have tried to dissuade Blacks from voting, including an effort by FreedomWorks, a right-wing nonprofit whose affiliate spent money on social media ads falsely suggesting that basketball star Lebron James didn’t trust mail-in voting during the pandemic. Lack of trust is part of the reason some Blacks rely less on information from mainstream news than on social media, where many disinformation campaigns frequently occur.

This distrust of mainstream outlets stems, at least in part, from Blacks being underrepresented in the newsroom. A September 2020 article from First Draft, a nonprofit focused on combatting disinformation, backs this finding, noting gaps between “organizations that work with communities they serve, and large newsrooms that too often fail to understand the most important issues” within Black communities. Some 71 percent of news anchors in America are white.

The most significant impacts of disinformation are not the tangible results that right wingers may reap from achieving policy goals. The largest and most lasting impacts involve people losing trust in government.

Analyzing the hidden impacts of disinformation helps show that while many are busy monitoring the part of the disinformation iceberg that is easily seen—working to identify individual disinformation campaigns on social media, for example—the most dangerous, underwater part of the iceberg receives far too little attention.