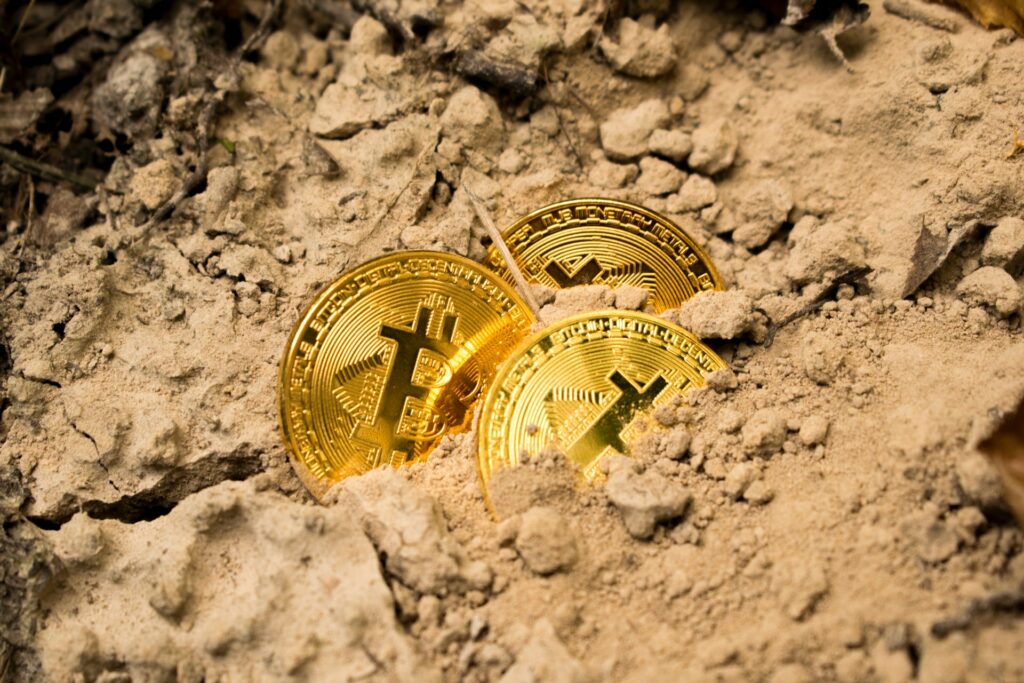 “Bitcoins” in the dirt (Photo by Dmitry Demidko on Unsplash)

After the Pennsylvania Department of Environmental Protection discovered the mining operation on a January site visit, it sent the company a notice of violation that alleged the firm had installed and operated generators without authorization. Per the letter to owner Matthew Anderson, these operations violate sections of the state environmental code, which prohibits the construction or modification of an air contamination source without a permit.

Bitcoin is a digital cryptocurrency in which every transaction is recorded in a distributed digital ledger, with each block of transactions added to a long chain of transactions, or the blockchain. In exchange for verifying a block, which involves racing to solve complex cryptographic puzzles, so-called miners are rewarded with cryptocurrency.

Cryptocurrencies’ value to society is hotly contested. Proponents say they give owners privacy and freedom from control of governments and banks, and the opportunity to reap big profits as the value of the private currency rises. Opponents claim cryptocurrencies are used to hide illegal wealth and activities, and are at their core giant Ponzi schemes, in which an essentially worthless good increases in price only so long as new customers buy into it. The recent volatility in cryptocurrency markets has only accentuated that controversy.

Over the past few years, bitcoin miners have found novel ways to acquire cheap electricity—including buying their own power plants. Other miners have begun purchasing gas that otherwise would have been flared off at oil wells in places like Texas and North Dakota to power on-site generators, using the electricity to mine bitcoin in server farms set up in shipping containers. At least in those cases, the gas would have been burned no matter what, so there are no additional greenhouse gas emissions.

The same can’t be said of Big Dog Energy’s operations, or of other off-grid mining operations at stranded gas wells. These are wells that have been opened and fracked but aren’t connected to pipelines, so well owners have no way to bring the gas to market. Anyone who sets up a bitcoin mining operation at one of these stranded sites is burning fossil fuels that would have stayed in the ground, if not for bitcoin.

Rob Altenburg, the director of the Energy Center at Citizens for Pennsylvania’s Future, a statewide environmental advocacy group, said miners who own gas wells can make more than twice as much money using their gas to mine bitcoin than they could selling it to the wholesale market. Altenburg is concerned about what this means for air pollution and greenhouse gas emissions in Pennsylvania, especially if more gas companies follow Big Dog’s lead. And since these operations are relatively mobile, they are hard to monitor and regulate.

Altenburg points out that Big Dog Energy owns other wells in the state where they could have started mining without anyone noticing. “I think it’s a fair question of, has anybody gone and looked at those other wells?” Altenburg said. “And has anybody looked at other companies?”

The Pennsylvania Department of Environmental Protection did not respond to emailed questions about Big Dog Energy’s bitcoin mining operations. Owner Matt Anderson told the local paper that the notice of violations “are likely inapplicable to my operations.”

“They seem to be at least trying to claim that they don’t even need a permit,” Altenburg said. “They’re either seeming to claim that they’re part of their existing permit for the gas wells—which I don’t believe and the people I’ve talked to at DEP don’t believe that. But, you know, courts haven’t weighed in on this yet, this is brand new. Or they’re claiming that they’re somehow exempted because of the nature of these sources, whether they’re too small, or they’re mobile.”

Another energy company in Pennsylvania is selling electricity produced at a gas well pad in Ridgway Township to power a bitcoin mining operation. In a statement provided to local journalist Brian Stockman, the company said, “Pin Oak Energy is evaluating what is being called a ‘digital pipeline.’ In essence, this process converts on-site natural gas production to on-site electricity to be used in a variety of applications.”

There are over a thousand unconventional (that is, fracked) wells in Pennsylvania that have been drilled but never reported any gas, condensate, or oil production through 2021, according to FracTracker Alliance. It’s not hard to imagine the owners of those stranded assets bringing in generators and bitcoin miners to get the profits flowing, especially if it is deemed to be legal.

Pennsylvania isn’t the only place this is happening. In 2020, a bitcoin mining company called Link Global installed four 1.25 megawatt gas generators at a dormant natural gas well in Alberta, Canada, and started mining bitcoin. The generators ran for nearly a year (364 days) without permission. Another unauthorized bitcoin mining operation by the same company ran for over 400 days.

In South Dakota, a bitcoin mining company called Highwire Energy purchased the mineral rights to seven natural gas wells that had been slated to be plugged.

Avi Asher-Schapiro, a reporter with the Thomson Reuters Foundation, interviewed someone who goes by “Hodl Tarantula” who mines bitcoin at abandoned gas wells in southeast Kentucky. Tarantula told Asher-Shapiro that just one site was bringing in $20,000 worth of bitcoin a month. Tarantula explained his operations in more detail on the Fun with Bitcoin podcast last year. Depending on the volume of gas available at each site, Tarantula said he will install a 1/2 megawatt or 1 megawatt generator to power the miners.

While the electricity generation may be small at individual sites, it could quickly add up depending on how fast Tarantula and other off-grid miners scale. “There is no limit to the amount of capital that can be extracted from stranded energy now that bitcoin mining is at play,” Tarantula told Asher-Schapiro.

On the podcast, Tarantula claimed that mining at stranded gas wells is environmentally friendly. “We’re reducing fugitive emissions, which is natural gas that would leak out, we’re actually putting it through a controlled environment and combusting it to CO2 which can be used by trees and turned into oxygen, which we breathe,” he said. “Whereas the methane or the CH4 that leaks out is 30 percent more damaging to the atmosphere and the ozone and there’s absolutely nothing that converts that into something that can be used in a beneficial manner by humanity.”

Tarantula is also part of the cottage industry that has sprung up to supply people with stranded gas resources with turnkey bitcoin mining solutions. Per his Twitter bio, he is now director of mining at a company based in Wyoming called Sovereign Mining, which sells pre-manufactured Bitcoin mining facilities with the enthusiastic tagline, “Mine Bitcoin Anywhere!” The company says it is “committed to powering the Bitcoin network with stranded and under utilized energy.”

Tarantula is (or at least was) also affiliated with a Kentucky-based gas company called Midstream, which sells turnkey solutions to prospective miners in addition to mining bitcoin. Per the company’s website, “instead of selling our gas, we use it to fuel generators which in turn power our cryptocurrency mining machines. Through this strategy, we are able to extract 10x more value from our natural gas.” It’s a good selling point for what the company calls the Big Rig, a 300-kilowatt mining array designed “for natural gas producers who want to dip their toes into mining powered by their own gas.”

In Kentucky, at least, off-grid mining appears to be perfectly legal. “We are aware of at least some working off previously idle gas wells, but there are no oil and gas statutes that prevent or govern this activity, beyond normal well maintenance, safety, and reporting requirements,” John Mura, a communications director at the Kentucky Energy and Environment Cabinet, wrote in an email. Mura added that he was “still checking on the permitting requirement for generators used in this manner.”

It is difficult to assess the scale at which bitcoin mining is bringing stranded gas wells online, because these operations are, as Altenburg observed, relatively small and mobile. They may only come to light—as in Alberta, and as in Ridgway, Pennsylvania—because residents complain about the noise. Even once people find out about them, local and state government officials may not be able to tell miners to stop.

“It’s really difficult for a state environmental regulator to deny permits,” Altenburg said. “I spent 22 years working for DEP. And I had to tell a lot of people that if a company meets the permit criteria, and DEP denies the permit—DEP doesn’t get to say, ‘We’re not going to let you do this, because we think it’s a bad idea.’ They’ve got to say, you know, ‘Do you meet these criteria or not?’ And the criteria were not written in a world where bitcoin mining was even a thought.”