The Energy Ministry announced Monday that it has begun preparing new tenders to explore offshore for natural gas, in an effort to help maintain Europe’s supplies as the continent weans itself off Russian energy.

As Western countries sanction Russia over its invasion of Ukraine and look for alternative energy sources, Israel has worked to position itself to become a key supplier using deposits in the Mediterranean Sea.

“The global energy crisis is an opportunity for the State of Israel to export natural gas, along with the sincere and genuine concern for what is happening in Europe,” she added, without mentioning Russia.

According to the statement, she “instructed her office staff to accelerate the strategic assessments to embark on a fourth natural gas exploration process.”

Elharrar also said a working team has been set up between Israel, Egypt and Europe to plan for the export, Reuters reported.

“The geopolitical events in the world, and the global energy crisis caused as a result, have completely changed the state of the energy market,” Schillat was quoted as saying in the statement.

He also said that while Israel and Europe were in agreement on “the most important strategic move” of developing renewable energy sources, “the global need for natural gas in both the immediate and medium term cannot be ignored.”

“In addition, it is difficult to overstate the importance of natural gas in strengthening ties between Israel and Egypt and its impact on Israel’s geopolitical status in the Middle East,” he added. 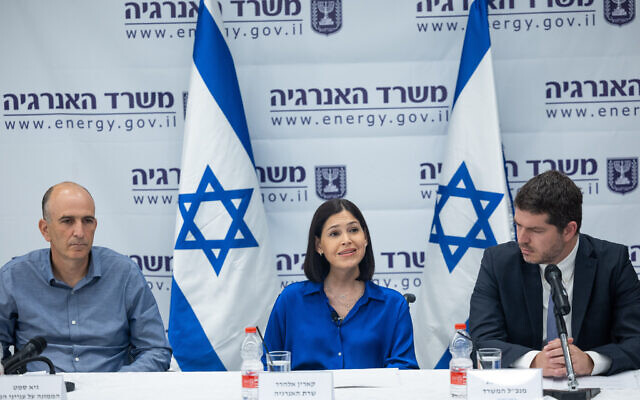 Last week, Schillat revealed that Israel and the EU have been negotiating for a month to export gas via Egypt to Europe.

Israel has no facilities for liquifying natural gas. The nearest is in Egypt. The plan calls for Israel to pipe gas to Egypt, where it would be liquified and then sent on to Europe. Along with delivering natural gas to Europe, Egypt will receive some for its own use.

Schillat said the crisis in Europe made the ministry rethink its energy strategy, including a December 2021 announcement that it planned to stop the search for more natural gas in 2022 and instead focus on renewable energy.

In his remarks Monday, Schillat noted the Europeans “were very clear” in saying that if no alternative natural gas sources were found, some European Union states will need to resort to coal to generate electricity.

In November, Israel and Egypt signed an agreement on a plan to provide Israeli natural gas to Egypt. After Russia invaded Ukraine, Elharrar talked with her Egyptian counterpart Tarek El Molla on ways they could plug some of the shortfall in natural gas caused by sanctions imposed on Russia.

The subject came up again when Elharrar was at the International Energy Agency conference in March in Paris, after which the European Energy Commission put in an official request for Israeli help.

Talks opened at the end of April.

Another proposal to build the so-called EastMed Pipeline, connecting Israeli natural gas to Europe via Greece and Cyprus, faces ongoing debate about its feasibility.

Israel has two working natural gas fields, Tamar and the bigger and newer Leviathan. Earlier this month, the new Karish field was connected to the country’s national gas line.

Last year, the European Union imported around 155 billion cubic meters (bcm) of gas from Russia, amounting to 45% of all its gas imports, according to the International Energy Agency.

EU states remain divided on the time scale, but European Commission President Ursula von der Leyen has said the bloc hopes to phase out its dependency on Russian gas, oil and coal by 2027.

Sue Surkes and agencies contributed to this report.