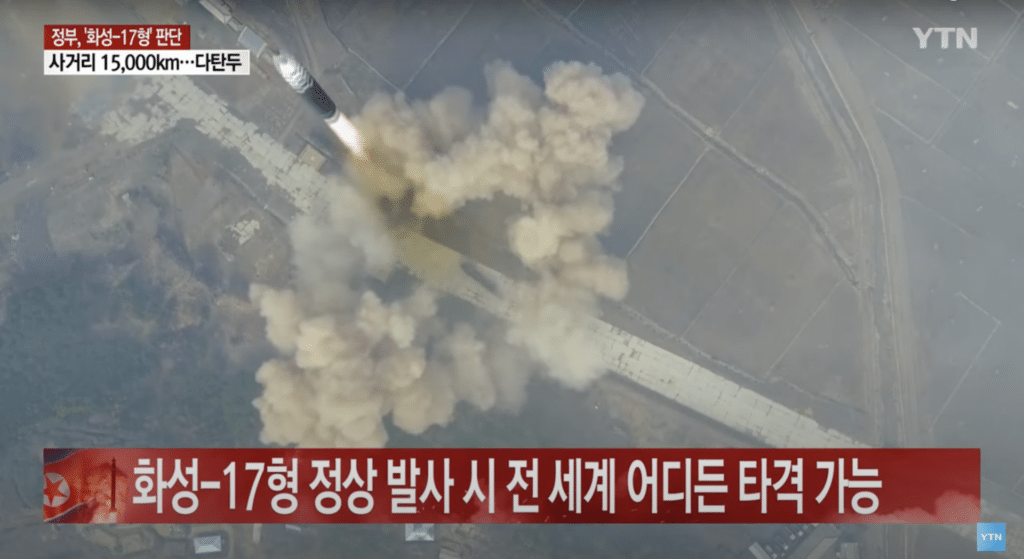 North Korea launches a suspected intercontinental ballistic missile reported to be a Hwasong-17, its largest-known ICBM, on May 25 (Seoul time), 2022 (Image YTN & YTN plus).

In a reversal from its earlier position, North Korea test-launched on Wednesday a suspected intercontinental ballistic missile (ICBM) and two shorter-range weapons—only hours after US president Joe Biden concluded his trip to Asia. In April 2018, North Korea’s leader, Kim Jong-un, had declared a self-imposed moratorium on nuclear weapons and long-range missile tests after three successful ICBM launches in 2017 demonstrated their potential range to reach the United States.

Each new North Korean missile test—regardless of its success or failure—brings Pyongyang closer to its goal of developing a credible, survivable nuclear weapons delivery system that can target the US homeland.

Recent missile developments. During its military parade in October 2020, North Korea also revealed the development of a larger Hwasong-17—the world’s largest liquid-propellant missile ever built, and deployed on a road-mobile launcher to date. A missile of this size suggests North Korea’s intends to arm the weapon with multiple warheads to overwhelm US national missile defense systems. The military parade also showed that North Korea appears to be indigenously designing launch vehicles for large missiles, including the Hwasong-17. This is significant because the survivability of North Korea’s ICBM force will heavily depend on the number of launchers they are about to build.

But North Korea’s advances are not just in building better, more capable, and more precise missiles. Its credible missile capability is now being accompanied also by a credible strategy. At the 8th Workers’ Party Congress in January 2021, Kim Jong-un laid out—in unusually specific details—his goals for North Korea’s weapons development. During his remarks, Kim outlined three major objectives for North Korea’s ICBM program likely to be the focus of future missile tests: multiple independent reentry vehicles (MIRVs) capable of hosting several warheads on a single missile, longer-range ICBMs with a 15,000-kilometer capability (about 9,321 miles), and solid-propellant ICBMs. Such new solid-fuel ICBMs take much less time to prepare for launch, making them quicker to turn around in a crisis—which consequently shortens the time the United States and South Korea might have to pre-empt these systems before they are launched.

The development of MIRVs by North Korea would be particularly negative for US security interests. With a limited number of missile defense interceptors designed to cope with North Korean ICBMs, a multiple warhead delivery system would significantly increase the threat to the US homeland. North Korea currently houses at least 10 ICBM launchers, including six launchers that were converted from Chinese Wanshan logging trucks and four 11-axle Hwasong-17 launchers. The United States currently has 44 ground-based interceptors that can handle limited ICBM threats from North Korea. As international security analyst Ankit Panda noted, “if you assume a worst-case scenario where [the U.S.] end[s] up using four interceptors per incoming reentry vehicle and you see single reentry vehicles, basically the North Koreans need to build one more launcher to saturate the existing capability.”

New nuclear activities. In addition to accelerating the development of survivable nuclear weapons delivery systems, there are now signs that North Korea may resume testing of its atomic bombs. US and South Korean intelligence agencies are on alert for a possible nuclear test by North Korea. On Wednesday, May 25, South Korea’s deputy national security advisor Kim Tae-hyo commented in a press briefing that North Korea has been testing a nuclear-triggering device in preparation for what would be the country’s seventh nuclear test. If conducted, this test would mean that Pyongyang is also breaking its self-imposed moratorium on nuclear weapons testing.

The strategic analysis program “Beyond Parallel” by the Korea Chair at the Center for Strategic & International Studies (CSIS) has used high off-nadir satellite imagery to monitor activity in the village of Punggye-ri where all of North Korea’s previous six nuclear tests have been conducted. Most recent imageries collected on May 17, 2022, indicated that there was continued expansion of the support infrastructure for the Punggye-ri nuclear testing facility—including changes in lumber piles, renovation of existing buildings, and construction of new buildings in the main administration and support area. Satellite images also revealed progress over the past three months in the refurbishing work and preparations at Tunnel Number 3. Such activity, if completed, will signal that North Korea has prepared for a possible nuclear test.

The war in Ukraine may also have affected the doctrine that informs North Korea’s pursuit of nuclear weapons and delivery capabilities. At one level, Russia’s military attack on Ukraine provides a confirmation to Kim Jong-un that his nuclear pursuits are the best way to deter any external threats. At another—more worrying—level, however, is the possibility of Kim seeing benefits in adopting a nuclear first-use strategy. Putin’s threats of nuclear weapons use—or, at least, his unwillingness to rule out their use—in response to any NATO intervention in Ukraine may influence the way Kim thinks about his ability to deter the United States from intervening on the Korean peninsula. In recent statements, Kim already referred to the possession of nuclear weapons as a deterrent and a secondary use as an “unexpected second mission” if outside forces violate its “fundamental interests.”

Deterring North Korea. Additional testing—particularly of MIRV capabilities—will be one of the greatest security challenges to the United States and South Korea. While there are no easy options to prevent further advances in North Korea’s weapons program, several steps could help altering Kim Jong-un’s cost-benefit calculations for his missile development efforts.

First, the United States and South Korea should upgrade their defense and deterrence capabilities on the Korean Peninsula. In addition to reactivating the suspended Extended Deterrence Strategy and Consultation Group—as promised in last week’s Biden-Yoon summit—the allies should consider other measures to integrate early warning systems, strike capabilities, and the rotation of dual-capable assets to the peninsula. Second, the two allies, along with Japan, should pursue a broad counter-missile strategy that involves detecting and defending against North Korean missiles and launchers, disrupting North Korea’s network of capabilities that allow them to fire missiles repeatedly, and destroying the launchers and missiles themselves. This would require the United States and South Korea to invest in capabilities like sensors, advanced command and control systems, and intelligence, surveillance and reconnaissance technology. Third, the United States can encourage Seoul to continue developing its indigenous capabilities to help protect South Korean critical infrastructure from North Korean missile barrages. South Korea’s version of the “Iron Dome”—an artillery interception system deployed by Israel—is an example of the types of capabilities it can develop.

The United States, Japan, and South Korea should also increase trilateral coordination on missile defense. This would require South Korea to rethink its long-held position that it would not cooperate with Japan and the United States trilaterally on detection, warning, tracking, and interception of ballistic missiles. For its part, the United States should consider shifting the focus of its diplomacy from completely shutting down North Korea’s nuclear program to slowing down or halting its missile testing. As North Korea comes closer to its capacity to overwhelm US national missile defenses, such policy reorientation is becoming more urgent. For as long as North Korea refuses to return to the negotiating table, the United States could consider integrating ideas for possible “carrots” and “sticks” in the missile realm into existing potential roadmaps for nuclear diplomacy.