A senior garda has advised a community outraged by an arson attack in Cork against offering a reward to identify the culprits, and to let gardaí do their work.

Chief Superintendent Tom Myers branded those responsible for the burning down of a historic mill in Ballincollig’s regional park last weekend as “gurriers”.

But he told a meeting of the Cork City Joint Policing Committee (JPC) this week that a community group’s suggestion of a €2,000 reward for information was not the best course of action.

While the reward idea was floated earlier this week, one has not has been offered yet and some information has emerged which may be of use to gardaí.

Chief Supt Myers said: “I can assure you that an investigation is taking place and we will do everything in our power to get those people before the courts as soon as possible. But let due process take place and we will see what comes out of it.”

Several public representatives called for a strategic policing and security response to the issue, and for the installation of CCTV cameras.

Lord Mayor Colm Kelleher said he has concerns that the arson attacks have escalated from the burning of a public toilet, to park benches and tables, and now buildings.

Fine Gael Cllr Derry Canty said he was sickened by the incident.

“This was done venomously by gurriers,” he said. “The person or persons doing this are out at 2am or 3am – you can’t have gardaí riding around the park at that hour of the morning. 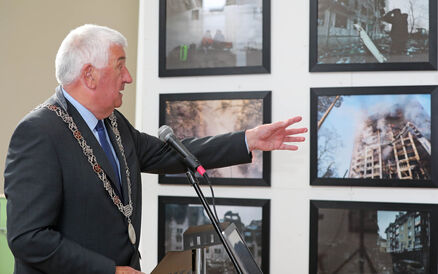 “But we do need more gardaí on the street. Carrigaline and Togher shouted for more gardaí and got them.”

The meeting was told that the location of any CCTV cameras would require detailed discussion given the park covers some 134 acres.

But council chief executive, Ann Doherty, said parks can not be policed 24/7 and data protection issues would need to be addressed as part of any consideration of CCTV in the park.

She also said CCTV on its own would not be enough and would have to be part of a wider system of security.