Albert Bourla, the CEO and chairman of Pfizer, accepted this year’s annual $1 million Genesis Prize in Jerusalem on Wednesday evening, announcing that he would donate the funds towards a planned Holocaust Museum in Thessaloniki, Greece, where he was born.

The annual prize, awarded since 2014, is given to “extraordinary individuals for their outstanding professional achievement, contribution to humanity, and commitment to Jewish values.”

He credited his mother Sara, who was saved from a firing squad by a bribe seconds before she was due to be shot, for influencing his life’s path by always insisting that nothing was impossible.

Israel was one of the first countries to vaccinate its population against COVID-19, using Pfizer’s shot.

A spokesperson for the Genesis Prize Foundation stressed that GPF was a “fully independent Israeli public benefit company” and that “sanctioned individuals or entities” played no part in it.

Dozens of protesters — many of them anti-vaxxers — gathered outside the Jerusalem Theater to protest the honoring of Bourla and the use of oligarch money for this year’s prize. 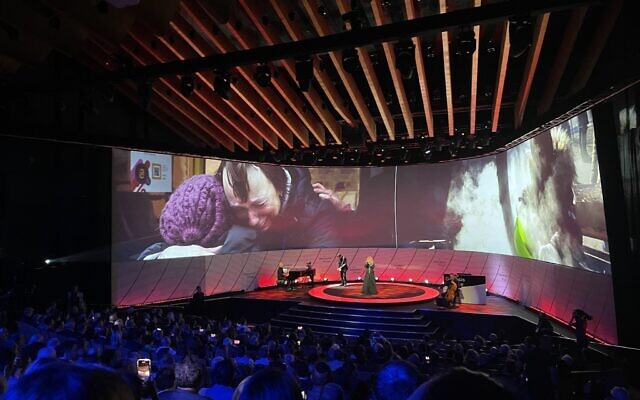 Part of a photo montage presented during the Genesis Prize award ceremony in Jerusalem, showing the devastation in Ukraine caused by the Russian invasion, June 29, 2022. (Sue Surkes/Times of Israel)

Inside, the ceremony began by acknowledging the “pain and suffering of the Ukrainian people,” and showing an extensive photo montage of the destruction being wreaked by the Russian invasion of that country.