2,500 fill Habima Square on Saturday night calling for change; organizers say they are working on a list of demands

Israelis protest against the soaring housing prices in Tel Aviv and cost of living, on July 2, 2022. (Tomer Neuberg/Flash90)

Some 2,500 people filled Habima Square in Tel Aviv on Saturday night to protest Israel’s high cost of living and soaring housing prices, according to police. Support for the campaign topped 22,000 on social media, and attracted people from across the country.

The organizers of the new movement stress that they are apolitical and hope to see legislation that will make significant changes to the housing market for everyone.

The focus on common ground was dominant in speeches on Saturday.

Gal Shor, one of the protest organizers, told the crowd that many Israelis have become “friars [suckers]… real friars!” 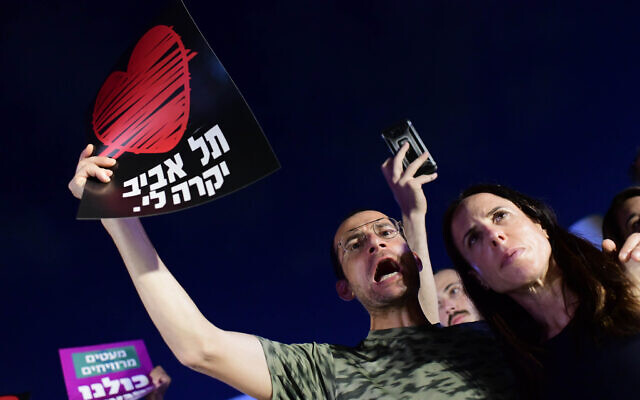 Israelis protest against the soaring housing prices in Tel Aviv and the general cost of living, on July 2, 2022. (Tomer Neuberg/Flash90)

Shor suggested, anecdotally, that the economic challenges in Israel are so great that a large number of young people are leaving the country because they do not see an economic future for themselves or their children. Israel does not collect specific data on residents emigrating from the country, for while the Central Bureau of Statistics keeps a record of the number of Israelis who leave the country’s borders in any given month (Hebrew), it does not track their reasons for doing so.

Shor, a medical masseur by profession, called on people to exercise their right to vote and to use that vote to change the situation. Typically, around 30% of those eligible to vote do not turn out.