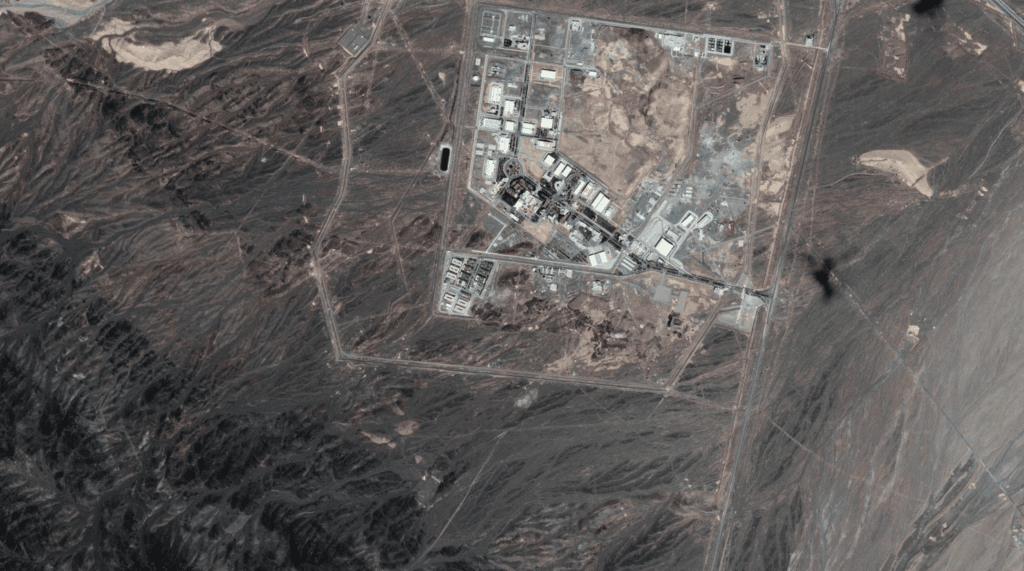 Emerging capabilities of commercial satellite imagery are enabling high-resolution observation of objects and activity over large areas or territories of entire states with a sub-hourly frequency. Existing constellations are being expanded and new ones are planned promising even higher resolution and frequency of observations, on a global scale. Coupled with AI-powered automatic monitoring and detection capability, this rapid technology development and deployment of advanced commercial satellites could soon make it very difficult—if not impossible—to establish secret nuclear programs or maintain secrecy around existing ones.

The burst of open-source intelligence. Satellites operated by private companies located in more than 30 countries now provide imagery that once was accessible only to a handful of governments. One must look no further than the daily coverage of the Russian invasion of Ukraine; satellite images captured the massing of Russian forces on the Ukrainian border, columns of military units, destroyed buildings, burning vehicles, and bodies scattered over streets. These images of war are now on our screens with unprecedented speed and detail. They are shared over social media by open-source investigators and combined with ground imagery of geo-located events captured by civilians with camera phones and soldiers with drones—a framework often referred to as open-source intelligence or OSINT.

Beyond conflicts, commercially available satellite images also provide an unobtrusive and cost-effective way to monitor the activity of civilian or military nuclear programs, as shown by the many recent analyses of sites in Iran and North Korea. Imagery is part of the International Atomic Energy Agency’s toolkit, with the agency’s inspectors combining commercial imagery with open-source information to look for direct and indirect signs of nuclear activities.

According to the Union of Concerned Scientists’ database, as of January 1, 2022, there were 4,852 satellites in orbit, 72 percent of which being commercial systems. The civilian space industry is experiencing extraordinary growth made possible by advancements in technology, increased governmental and public demand for services, and cheaper space launches. Following this growth and relaxation of distribution restrictions, providers of commercial satellite imagery are launching new constellations and encouraging the development of novel applications of overhead imagery.

Current commercial systems can acquire data with a 30-centimeter (cm) and 31-cm resolution in the panchromatic (black and white), respectively. By comparison, US government-owned spy satellites can produce imagery with a top resolution at the level of 10 cm; as evidenced by former President Trump’s tweet showing a failed Iranian missile launch in 2019.

Rather than trying to reach the highest level of image quality, commercial providers deploy instead multiple satellites built with cheaper, off-the-shelf components which they can easily replace if they malfunction or technology advances. In addition, using multiple sensors observing from different angles and orbits results in a higher persistency of coverage. For example, the US company Planet operates more than 150 Dove satellites with up to 3.7-meter resolution. The constellation is being constantly expanded and upgraded, and the data is combined to get a more comprehensive view of the surface.

Sensors with a wider spectral range make it possible to see details beyond the capabilities of the human eye, classify observed material and distinguish human-made from natural objects. Some sensors can also image in the infrared spectrum, allowing them to detect thermal sources on the surface, especially useful for tracking activity inside facilities. But most optical systems won’t see the Earth’s surface during the night or in conditions of poor illumination. Clouds cover most of the land surface at any moment in time, and some locations remain permanently hidden. This makes it difficult to observe any location on demand.

Synthetic-aperture radar (SAR) systems can fill the observation gaps. Here, the image is produced by the radar antenna which transmits microwave pulses that bounce from ground targets and are then bounced back to the satellite. By measuring the phase and the intensity of the returned signal, the system can construct an image of the surface and accurately derive distances between objects, after a relatively extensive image conversion process. Atmospheric and illumination conditions will not affect the quality of the image. SAR systems are always watching.

Satellite super-constellation imagery. If all commercial satellites currently in operation were to be combined into one super-constellation, they would provide global coverage of the Earth’s surface with a frequency of only a few hours. Recent work has simulated what type of coverage can be provided by a super-constellation formed by 300 systems—265 optical imaging satellites and 35 SAR-equipped satellites. These systems were selected under the condition that they offer some form of public access to their data and have an imaging ground resolution of five meters or less, at which it becomes possible to identify many objects from space—even though lower-resolution imagery can and was regularly used for nuclear verification and monitoring.

The simulation calculates the ground coverage of the constellation over territories of states with active nuclear programs for a duration of 14 days. A successful pass was not defined simply as a ground track revisit but as a successful observation of some site considering orbit and sensor properties. For optical systems, it considers the effect of statistical cloud coverage and sun illumination, while for SAR it assumes this has no effect on observation quality. Coverage was calculated for different ground resolution intervals, equivalent to levels of detectability of ground objects. Optical and SAR systems were simulated separately because observations in different bands are not equivalent and do not provide the same type of information for a given resolution, even though data from different bands can be merged to provide more than the sum of its parts. Results from the simulations show that with combined commercial systems, it would be possible to observe most locations on the planet every 15 hours on average in the optical and under five hours with SAR, with a sub-meter resolution.

Applications in nuclear verification and monitoring. The current fleet of commercial imagery satellites allows inspectors to detect, identify and monitor most objects relevant to nuclear arms control and nuclear proliferation analysis. They also allow identifying signatures of activities associated with the development, acquisition, and maintenance of operational nuclear weapons capabilities. Commercial imagery satellites can also reveal the absence of items that are necessary for the normal operation of a site that was declared to have some other non-nuclear uses.

High resolution and high frequency of observation are not necessary for the detection of new structures and most immobile objects. Commissioning of nuclear facilities takes years and can easily be detected even with low-resolution sensors. For example, in 2006, imagery taken at a monthly rate was used to detect the construction of a nuclear reactor in Pakistan and later produce a three-dimensional model of the facility and estimate its plutonium production capacity. Even before construction begins, a future site of a nuclear facility can be recognized by tight security, the stockpiling of equipment and increased traffic at a remote location, or proximity to other sites of similar characteristics.

Satellite observations of a site at a weekly frequency provide more information on the facility operation and surrounding activity. Multispectral monitoring of thermal and vapor plume emissions and steam discharges enables monitoring of the operational state of a nuclear facility and can even help estimate the existing stockpile. Satellites can also be used as a tool to track the nuclear fuel cycle. For example, civilian inspectors were able to monitor the operation of North Korea’s nuclear reactor and Yongbyon radiochemistry laboratory. Established durations of activity match IAEA’s estimated time required to reprocess irradiated fuel and produce plutonium.

Even more frequent observation allows for more confident mapping of trends and an increased probability of detection of attempts at deceiving the observer. Using imagery taken daily, researchers from Stanford’s Center for International Security and Cooperation (CISAC) were able to count trucks at a border crossing between China and North Korea, and in that way track trends in trade activity between the two countries.

With the enormous amount of data being downlinked to ground stations each day, AI algorithms are increasingly used for the processing of raw imagery, object classification, and identification of correlations and irregular behavior. For example, the retail industry uses such algorithms to count cars on parking lots and help companies evaluate commercial activity, whereas analysts use them to count the number of new oil well pads to predict global supply. Similar AI-powered detection capabilities can be used for nuclear verification and monitoring.

Integration of AI in data analysis. With the help of AI algorithms, researchers from open-source defense intelligence agency Janes and Stanford’s CISAC used imagery taken at a monthly rate between mid-2020 and early 2021 to automatically count vehicles on a parking lot of a nuclear facility in Iran. From this information, they inferred site personnel fluctuations and then the progress in the construction of a possible underground centrifuge assembly facility—despite the facility not being directly visible from space. Higher persistency of coverage could permit detection and tracking of individual vehicles entering and leaving nuclear facilities with much higher confidence. This can reflect staffing and material demand, allowing remote inspectors to evaluate the production status without the need to visit the site or place intrusive electronic sensors.

Monitoring of state nuclear activities can be performed even without satellites. Citizens can often see what is happening in their area and share information over the Internet. For example, Nukewatch—a volunteer-based civilian organization—tracks British nuclear warhead convoys. Then, crossing the observed level of activity and movement of trucks with official reports and publications, Nukewatch can analyze UK’s nuclear modernization and estimate the armament of their nuclear-capable submarines. But this kind of information gathering by concerned citizens is not possible in all countries. Even otherwise democratic societies often work hard to keep their nuclear programs far from the public eye.

Another simulation was performed with a satellite super-constellation by focusing the coverage on the territories of China and North Korea. Chinese and Russian providers that might have objected to imaging of sensitive areas were removed from the sample of available systems. A similar analysis can be performed for other territories, such as the United States and Russia, by removing satellites operated by companies located in those countries. The results showed that on average all locations for every ground resolution in China and North Korea can be imaged at least once every 24 hours. If using the SAR technology, the entire territory of China can be imaged every few hours. This would, for example, allow detection of missile uploading at all known Chinese missile silo locations. (See Figure.)

Outlook. Even though confidence in what is observed typically scales with sensor advancements and the increased number of satellites, there are inherent limitations to what a sensor can observe from the Earth’s orbit. Hosts can attempt to obfuscate their activities, camouflage objects, or otherwise deceive the observer. But hiding will become increasingly difficult as more data is collected, and persistency of coverage is improved.

Advanced satellite imagery allows counting objects of sufficient size, but cannot reveal sensitive information about their structure, chemical composition, or other confidential characteristics. This technical limitation could act as an advantage in nuclear inspection, as the host does not need to worry about the unintended disclosure of information.

Within the next few decades, swarms of commercial surveillance satellites could make real-time multispectral satellite imagery available to everyone. Aided by AI, this could be exploited to create an automated system that monitors sites and detects the appearance or removal of objects relevant to civilian and military nuclear programs, for all atmospheric conditions and during the night. Satellites may be able to track all vehicles entering or leaving nuclear sites anywhere in the world, be they uranium mines, enrichment plants, nuclear reactors, or weapons assembly, deployment, maintenance, storage, and dismantlement sites. Establishing secret nuclear programs—both for energy and weapons—and maintaining secrecy around existing ones could soon become extremely difficult, if not impossible.