For the first time since invading its neighbor in February, Moscow made no claims of territorial gains on Wednesday, notes US think tank; UK says Russians ‘reconstituting forces’

On Wednesday, Russian forces made no claimed or assessed territorial gains in Ukraine “for the first time in 133 days of war,” according to the Institute for the Study of War. The think tank based in Washington suggested that Moscow may be taking an “operational pause” that does not entail “the complete cessation of active hostilities.”

“Russian forces will likely confine themselves to relatively small-scale offensive actions as they attempt to set conditions for more significant offensive operations and rebuild the combat power needed to attempt those more ambitious undertakings,” the institute said.

Shelling continued in Ukraine’s east, where at least nine civilians were killed and six wounded in 24 hours, Ukrainian officials said.

Ten cities and villages came under shelling in Donetsk, and 35 buildings were destroyed, including a school, a vocational college and a hospital, officials said. 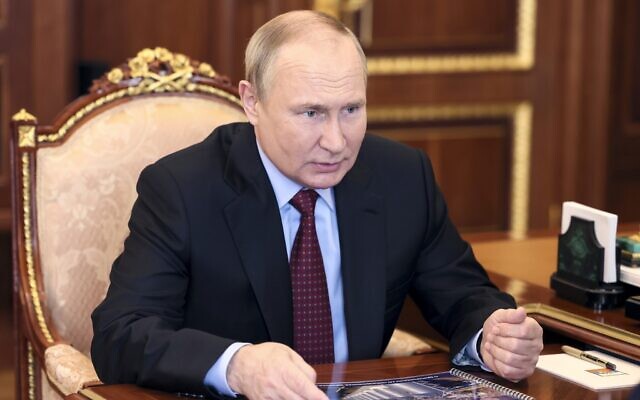 Russian President Vladimir Putin during a meeting in the Kremlin in Moscow, Russia, July 6, 2022. (Sputnik, Kremlin Pool Photo via AP)

In Kharkiv, Ukraine’s second-largest city, a boarding school was hit, but no one was injured. The Kharkiv region, which lies along the border with Russia, is under daily shelling, and two civilians were killed there over the past 24 hours.

The Ukrainian military said Thursday that Russian forces also carried out shelling and helicopter strikes in the Sumy region in the northeast.

Even as the fighting continued, the British Defense Ministry said it thinks Russia’s military is “reconstituting” its forces. A ministry intelligence assessment issued Thursday said the heavy shelling along the front line in Donetsk is likely intended to secure previous Russian gains.

The British ministry noted a new law under consideration by the Russian parliament to give the government special economic powers amid the war.

The law would allow “Russia to avoid acknowledging it is engaged in a war or its failure to overcome Ukraine’s military that was outnumbered and outgunned,” the ministry said.