The drop in support will be concerning to Fine Gael, who fall to their lowest level of support since 1994. 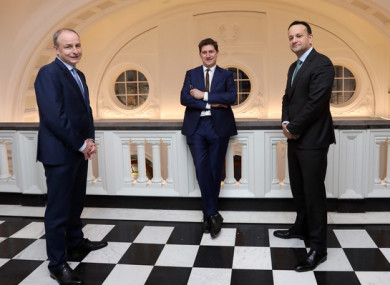 SUPPORT FOR THE Government has dropped again amid an ongoing cost-of-living crisis, as Fine Gael drops to its lowest level since 1994.

According to the latest Irish Times Ipsos poll, support for the three Government parties has dropped with Fianna Fáil on 20% (down three points), Fine Gael on 18% (down four points) and Green Party unchanged on 3%.

Alongside decreasing support for the parties, satisfaction with the Government has fallen sharply since April, dropping 12 points to 32%.

Satisfaction with the coalition party leaders has also dropped, with Leo Varadkar falling by 12 points to 36%, Micheál Martin dropping by 11 points to 40% and Eamon Ryan falling by four points to 15%.

Meanwhile, Sinn Féin continue to surge in support and have reached their highest ever point in the Ipsos poll series at 36%, an increase of three points.

Satisfaction with Sinn Féin’s leader Mary Lou McDonald has also increased, rising by one point to 43%.

The drop in support for the Government comes just days after it survived a confidence motion tabled by Sinn Féin, after it lost its majority on paper.

However, the Government defeated the motion with 85 votes to 66, a margin of 19 with multiple Independent TDs voting with the Government.

Government party TDs like Neasa Hourigan and Joe McHugh, who had previously lost the whip for voting against the Government, also supported them during the confidence motion.

The poll, which is run by the Irish Times and the polling company Ipsos, also sees support for Independents and smaller parties rise slightly.

Labour remains the same on 4%, the Social Democrats remain in 2%, Solidarity People Before Profit are on 3% (up two points), Aontú remains on 1% and Independents have risen by 4 points to 14%.