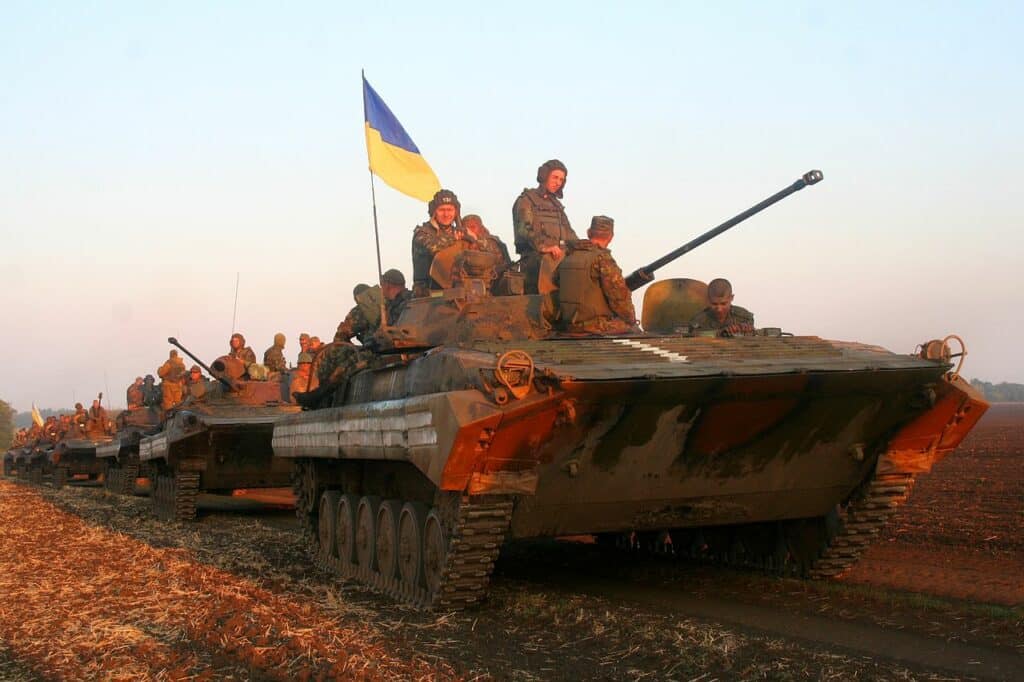 A military drill by Ukrainian tank crews in eastern Ukraine, prior to the latest hostilities with Russia. File photo courtesy of Ministry of Defense of Ukraine, under Creative Commons Attribution-Share Alike 2.0 Generic license.

Russia has rejected calls from the United Nations for a demilitarized zone around Europe’s largest nuclear power plant, which has been occupied by Moscow’s forces since early March and lies in a region of Ukraine that is set to become a new frontline of the war. Russia’s permanent representative to the body, Vasily Nebenzya, told Interfax on Friday that Moscow must “protect” the Zaporizhzhia plant. A withdrawal of its troops would make the facility “vulnerable … to provocations and terrorist attacks,” he said.

The UN secretary general, António Guterres, had earlier called for all military personnel and equipment to be pulled out, saying the plant “should not be used as part of any military operations” and a demilitarized zone needed to be agreed to.

“This is a serious hour, a grave hour,” Grossi told the UN security council.

Ukraine and Russia on Friday accused each other of risking nuclear catastrophe at the plant, which lies on the opposite bank of a reservoir from several Ukrainian-held towns and cities that have come under intense shelling from the Russian-held side. The former Russian president Dmitry Medvedev on Friday said Ukraine was shelling the plant itself. “They say it’s Russia,” he wrote on Telegram. “That’s obviously 100 percent nonsense, even for the stupid Russophobic public.”

Medvedev, the deputy chair of Russia’s security council, added: “They say it happens purely by chance, like ‘we didn’t mean to.’ What can I say? Let’s not forget that the European Union also has nuclear power plants. And accidents can happen there, too.”

“The Ukrainian armed forces do not damage the infrastructure [of the plant], do not strike where there may be a danger on a global scale,” the army spokesperson Natalia Humeniuk told national television. “We understand that the invaders are hiding behind such a shield because it is not possible to strike there.”

Earlier this week, Ukraine accused Russia of firing rockets from around the captured plant, killing at least 13 people and wounding 10, in the knowledge it would be too dangerous for Ukraine to return fire.

The Ukrainian president, Volodymyr Zelenskiy, demanded Russia return the plant to Ukraine’s control. “Only a full withdrawal of the Russians … and the restoration of full Ukrainian control of the situation around the station can guarantee a resumption of nuclear security for all of Europe,” he said in his latest video address.

Petro Kotin, the head of Energoatom, has previously warned of the danger of shells hitting containers of highly radioactive spent nuclear fuel. If two or more containers were to be broken, “it is impossible to assess the scale” of the resulting disaster, he said, adding that “such insane actions could lead to … a Fukushima or Chornobyl.”

Grossi said he was ready to lead an international expert mission to inspect the site in south-eastern Ukraine and called on Russia and Ukraine to cooperate so officials could travel as soon as possible.

Against backdrop of war, major climate report calls for adaptation and mitigation now

“Time is of the essence,” he told the 15-member security council late on Thursday, adding that the agency could perform urgent work on safeguards and provide a stabilizing influence in order “to prevent a nuclear accident.”

Fighting has intensified in recent days in anticipation of what Ukraine says is a planned counteroffensive in the south. The country’s general staff on Friday reported shelling and air attacks by Russian forces on scores of towns and bases.

Pavlo Kyrylenko, the governor of the eastern Donetsk region, said on Telegram that seven civilians had been killed and 14 wounded in the past 24 hours.

Britain’s defense ministry said on Friday that explosions earlier this week at the Russian-operated Saky military airfield in western Crimea were “almost certainly” the result of the detonation of up to four uncovered munition storage areas.

It did not say what the exact cause of the blasts was but said at least five Su-24 fencer fighter-bombers and three Su-30 flanker H multi-role jets appeared to have been destroyed or seriously damaged. The airfield itself, while seriously damaged, probably remained serviceable, the report added.

Kyiv has not claimed responsibility for the attack or explained how it was carried out. Russia has denied aircraft were damaged and said the explosions at the base were accidental.

Editor’s note: This story was originally published by The Guardian. It appears here as part of the Climate Desk collaboration.